The former Pennsylvania senator makes Romney look like the plutocrat he is, but he has no solutions for the economy 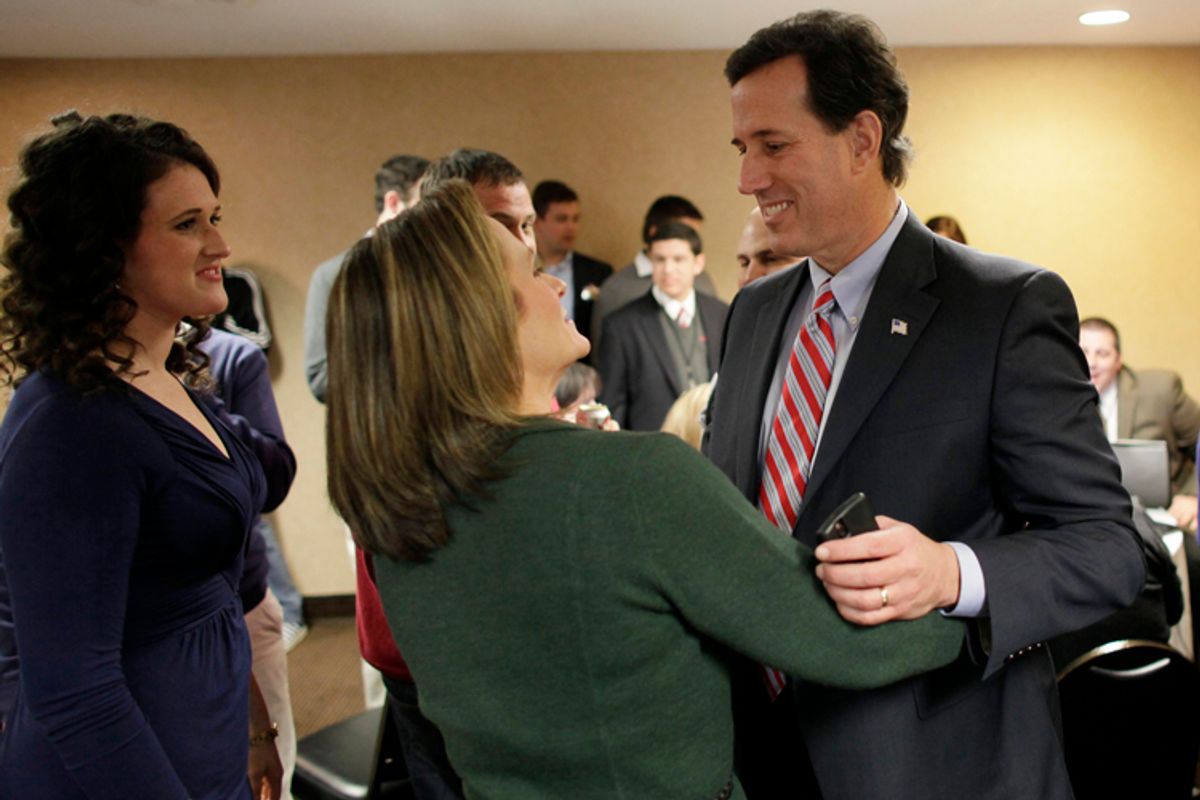 For a modestly attended small-state caucus that ended with three candidates within 4 percent of one another, Iowa clarified a great deal about the GOP presidential campaign. Mitt Romney didn't entirely shame himself; the man who once pondered skipping Iowa because of its conservative Christian caucus base wound up effectively tied for first place, ahead by eight votes when all the caucus reports were in. Most important, there's already an official anti-Romney candidate, and it's Rick Santorum. Two weeks ago, nobody saw that coming. He and Romney are going to fight a faux-battle over the role of class and the sputtering American economy that will ultimately offer no solutions for struggling Americans. But it might highlight issues that ought to matter in November.

Just as Ron Paul, who finished a slightly disappointing third, brings a welcome focus on the excesses of the American national security state, Santorum shows a concern for the casualties of the American economy that is rare for a Republican. It's not that Santorum has answers, but it's a little bit bracing even to hear the questions, in a race that has been mainly about destroying Iran and the evil socialism of Barack Obama. Don't get me wrong: Santorum wants to destroy Iran, and Obama, and he has no solutions to the problems of income inequality and stalled economic mobility he professes to care about. But his election night speech established a huge empathy gulf between him and Romney that ought to rattle Romney in the weeks to come.

I found myself moved when Santorum talked about his Italian immigrant grandfather, a coal miner, who "worked in a mine in a company town, he lived in a shack." Santorum described staring at his grandfather's big, rough, workingman's hands after he died, and realizing "those hands dug freedom for me." I thought of that great Bill Withers song, "Grandma's hands." Mitt Romney will never make you think of Bill Withers.

And yet Santorum has nothing to offer the struggling, left-behind American worker. He gathered himself up to denounce his party for only talking about cutting taxes and regulations when people are hurting – and then he mainly talked about cutting taxes and regulations. Santorum's answer to American economic insecurity is strengthening the American family. He offered the touching bromide, "When the family breaks down, the economy breaks down." In fact, the reverse may be true.

David Brooks delivered the broad outlines of what is likely to be the best conservative argument to back Santorum as the anti-Romney: that the former senator is a working-class hero from "the steel towns of western Pennsylvania," who "is not a representative of the corporate or financial wing of the party." Brooks dings Obama at the same time as he disses Mitt Romney, quipping that "the country doesn’t want an election that is Harvard Law versus Harvard Law."  Of course, Brooks is taking the modern GOP culture-warrior view of class: pointy-headed elites v. regular Joes, obscuring the real gulf between plutocrats and the rest of us.

Sadly, Brooks is right that the Republican Party has become the home of the white working class. I wrote weeks ago that it's silly to keep talking about "Reagan Democrats," because the demographic group that Richard Nixon began luring to the GOP, and whose allegiance Reagan cemented, simply aren't Democrats anymore. Steadily since the '60s, white working-class voters have shifted their political affiliation to the Republican Party (although Obama, paradoxically, did better with them than John Kerry or Al Gore did). Brooks is also right when he admits "Republicans harvest their votes but have done a poor job responding to their needs."

But whether they're led by Santorum or Romney, Republicans are not going to suddenly start responding to the needs of the working class, white or otherwise. And certainly not working-class families. A generation of sanctimonious GOP talk about "family" ignores the fact that progressive legislation helped create the family as we knew it from World War II through the '70s (which is what GOP family values folks hark back to). Certainly it was progressive reformers who scratched and clawed to carve out what we now think of as "childhood," once reserved for wealthy children, by passing child-labor and compulsory education laws (which Gingrich and the modern GOP, by the way, apparently question). With all due respect to Santorum's late grandfather, unions protected by liberalized labor-organizing and worker safety laws made dangerous mine work safer and pushed many struggling working-class families into the secure middle class.

It was the New Deal and postwar liberalism that created the conditions to allow at least a couple of generations of white working- and middle-class women to stay home with their children. And it was the erosion of that postwar wages and benefits social compact, probably more than feminism, that sent women surging into the workplace, whether or not they might have wanted to be home with their kids. Unfortunately, the white working class has ignored most of this, undermining its own well-being by embracing the anti-government politics of paranoia and racial division espoused by the modern GOP.

Santorum and the rest of the right are unable to accept that their free-market fanaticism destroyed the social compact that made our modern version of family life possible. Still, this is a more interesting discussion than the one likely to be fostered by Romney, who devoted his election night speech to reciting little known stanzas of "America the Beautiful" and condescending to both Santorum and Obama.

So I would love to see a Santorum-Obama matchup, not only because I believe the president would clean his clock. Santorum boasted Tuesday night that he was elected to the Senate by the Pennsylvania voters Obama talked about "who cling to their guns and their Bibles," without mentioning that those voters kicked him to the curb 58-41 for Democrat Bob Casey in 2006. It's silly to depict Obama as the creature of Harvard Law or an out-of-touch elitist, as Brooks and Santorum attempt to. The president grew up with a struggling single mom and her middle-class parents. I'd like to see him match his family values against Santorum's any day. An election that was all about  the struggles of working- and middle-class Americans would also ensure that the fighting populist Obama we've seen in the last four months continues to suppress the bipartisan, deficit-cutting Obama we saw too much until this September.

That said, I don't expect to see that matchup. Romney has a lot of money, and Santorum has a lot of repellent positions. His cruelty about gay people horrifies independents, and his opposition to contraception, not merely abortion, is going to repel even Republican voters. Brooks tells the story of Santorum and his wife, Karen, taking home their baby who died in childbirth "and 'welcoming' it into the family" – a story, he says condescendingly, that "tends to be deeply creepy to many secular people but inspiring to many of the more devout." The fact is, we "secular people" – I'm a Catholic, but a "secular person" when it comes to government, as were most of our founders -- don't want to deny the Santorums the right to handle their baby's death that way. We just want the same right to handle the mysteries of conception and family and birth and death with privacy, in our own ways.

But Santorum says we have no right to privacy; unbelievably, he opposes the Supreme Court decision in Griswold v. Connecticut that legalized contraception. He told ABC News that "the state has a right" to make contraception illegal. Earlier this year he condemned contraception as "a license to do things in a sexual realm that is counter to how things are supposed to be.” That's crazy talk in 2012.

So far in this campaign Republicans have barely mentioned the foreclosure nightmare, the Huffington Post revealed, or our infrastructure crisis, according to Politico (even though infrastructure used to be a rare area of bipartisan agreement). Neither working-class Rick Santorum (who is actually a recipient of wingnut welfare) nor silver spoon Mitt Romney have anything to offer the Americans suffering in this still sputtering economy, so the culture war is still likely to dominate this election cycle. But it's at least more interesting to have Santorum professing to care about working-class Americans. Democrats ought to focus on how little he proposes to do for them.