Is the right more interested in bickering with itself or toppling Romney? 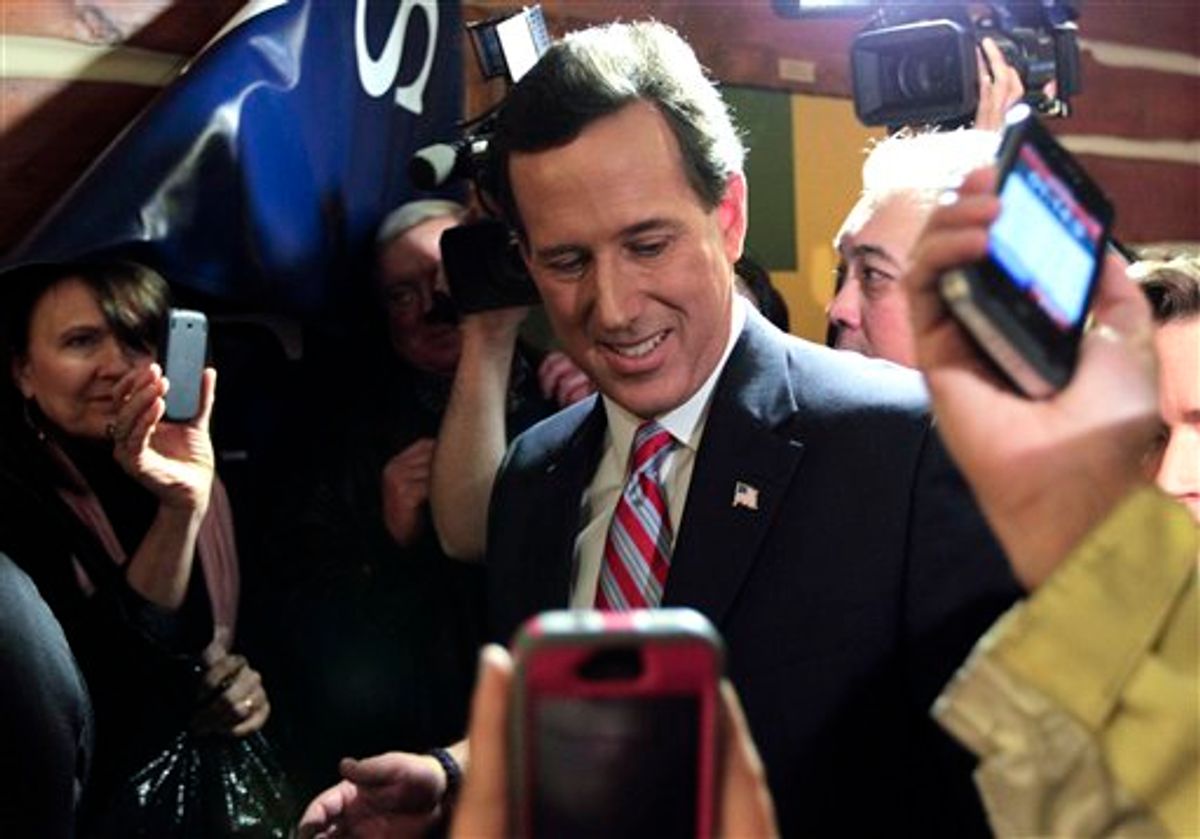 Wednesday started out so well for Rick Santorum.

Sure, the wee hours brought a slight disappointment, when the final tally from the Iowa caucuses showed him eight agonizing votes behind Mitt Romney. But if ever there were a moral victory in politics, this was clearly it: After a year of virtual anonymity, Santorum had held the GOP front-runner to a virtual tie (and to the lowest-ever share of the vote for an Iowa winner) and finished comfortably ahead of the other candidates who'd been vying to become the conservative movement's consensus Romney alternative.

Now Santorum had a chance to claim the role all for himself going forward, and he seemed to take a big step toward doing it when Rick Perry used his concession speech to all but drop out of the race, declaring that he would return to Texas to reassess his candidacy. By late morning, Michele Bachmann added her name to the casualty list, ending her candidacy at a Des Moines news conference. Between the two of them, Bachmann and Perry gobbled up 20 percent of the evangelical vote in Iowa, a constituency that looms just as large (60 percent of the entire GOP primary electorate) in South Carolina as it did in the Hawkeye State -- and one that is key to Santorum's chances of derailing Romney.

And as this was happening, money was pouring into Santorum's treasury like never before. By the end of the day, according to the candidate, he'd taken in $1 million in new contributions -- the same amount he'd raised for the entire campaign before today.

But somewhere around noon, the headaches began.

The first and biggest was the sudden, inexplicable decision by Perry (announced via Twitter that his own spokesman didn't know about) to stay in the race. The Texas governor's move came as a surprise even to his own campaign team and represents a clear and direct threat to Santorum's effort to unite the right. Given his dreadful performance as a candidate and his awful showing in Iowa (ten percent of the vote and fifth place, despite millions in expenditures), there's no reason to believe that Perry will come close to winning South Carolina, let alone the nomination. But if he used his remaining treasury to saturate the airwaves and replicates his Iowa finish, it will effectively deny Santorum badly needed conservative votes -- and offer Romney a chance to prevail.

The early afternoon hours brought further disappointment for Santorum when Rush Limbaugh's radio show went on the air. Limbaugh remains one of the most influential opinion-shapers on the right, the rare voice that the GOP's Tea Party base seems willing to listen to. Limbaugh has been rough on Romney for most of the campaign, telling listeners that Romney "is not a conservative" and urging them to consider other candidates.

The resistance of Limbaugh's audience is a big reason why Romney has been unable to crack the 25 percent mark outside of New Hampshire, and there's little that Santorum would benefit more from now than a clear signal from the host that it's time for conservatives to rally around him as their last best hope. But even though the clock is ticking and Iowa established Santorum as the most viable non-Romney option left, Limbaugh was in no mood to play along on Wednesday.

Instead, he praised Perry for staying in the race, talked up Gingrich's potential to damage Romney in the coming debates, insisted that it's still early in the process, and even mentioned in passing the idea of Sarah Palin jumping into the race. He had some nice words for Santorum too, but on the whole Limbaugh's post-Iowa show didn't offer the Pennsylvanian the kind of boost he's looking for -- and needs.

There's also the Gingrich factor. The former House speaker is essentially embarking on a one-man payback mission, vowing to confront Romney forcefully on the campaign trail and in debates in the weeks ahead. Gingrich is motivated by his own Iowa demise, which was keyed by a barrage of attacks ads launched by a pro-Romney Super PAC.

In theory, Gingrich's push could help Santorum by softening up Romney. But remember: Strong debate performances are what lifted Gingrich's poll numbers in the first place. So if he steals the show with his Romney attacks in the upcoming debates, why should we assume that Santorum will be the beneficiary -- and that Gingrich's own numbers won't instead rise? And the more that Gingrich and Santorum seem like equally viable options to conservatives in South Carolina, the better Romney's chances will be. And if Romney can pull off a South Carolina win -- even if it's with an unimpressive plurality -- the endorsement floodgates should open, just as they did for John McCain when he won the state by three points in 2008.

There was news Wednesday morning that a group of conservative leaders was looking to clear the field of non-Romney candidates and unite around a consensus choice. Given his Iowa success, Santorum would be the natural choice for this role. But the mood hardly seems unanimous on the right. Instead, some conservative opinion-leaders are already attacking Santorum as an apostate, and Limbaugh is even talking up how fun it will be to watch Gingrich do battle with Romney.

All told, Wednesday was not an encouraging start to the post-Iowa phase of Santorum's campaign. He needs his conservative rivals and the right's biggest leaders to rally around him in a hurry, but there's no sign yet that they feel much urgency.