The real key to good health

Don't fear resolutions or dread the January fitness crunch. Just make yourself one simple promise in 2012 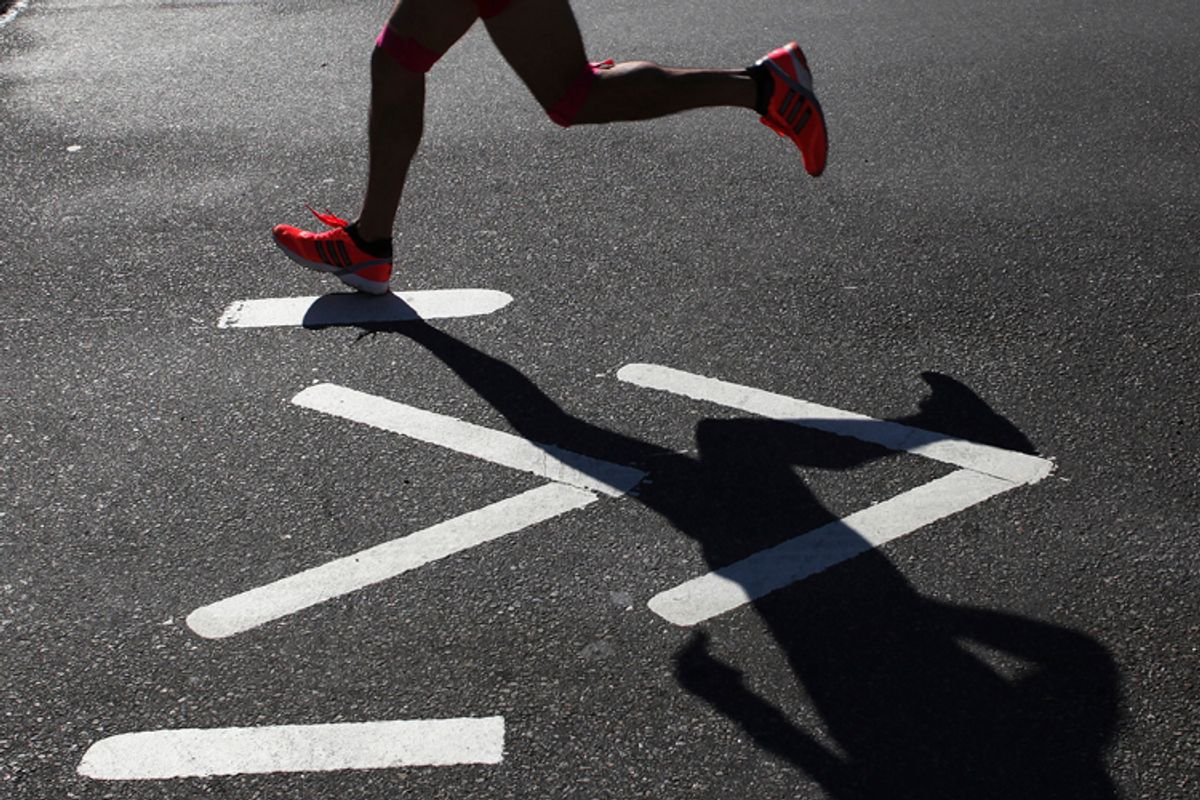 January sucks. Every magazine cover is festooned with the image of a celebrity in a bikini, promising you the secrets of a BETTER BODY for the new year. Your friends are all going on juice fasts. And the answer to "Feel like going for a bike ride today?" is "Maybe sometime when it's not 11 degrees out."

In just the time it takes to realize that "Work It" is the worst thing that ever happened to television, you could change your life. Thirty minutes a day. That's the minimum amount of physical activity the CDC recommends to stay fit. Yet approximately 30 percent of Americans get no weekly activity at all. Zero. Not even candy-ass pastimes like gardening. And many more of us aren't exactly wearing out the gym membership cards. Right now, the only thing moving at a fast pace in our country is the obesity rate – 30 percent and climbing.

In an already over-saturated life full of work and family and errands and commuting, it's often grueling to find 30 minutes to do anything at all. There are days when carving out a window of opportunity to grab a shower feels like a big deal. But I promise, a half-hour is not a lot of time. Treated seriously and honored consistently, it'll do a lot more for your health and well-being than that spinning class across town you go to once a month. And don't you deserve as much loving attention as you'd give your car or your iPad?

Here's what you need. Sneakers. A mix of cardio and strength training. An understanding that you can't fool your body by not making an effort. A casual saunter on the treadmill while tweeting isn't going to do jack. You know that lady in the Apple Siri ad, the one who wants to be reminded to call Chris while she's going for a run? Yeah, don't be her. No talking on the phone. No checking the weather. And no excuses. Thirty minutes to put in real work, whatever work feels like for your fitness level. (Here's the inevitable reminder that this isn't medical advice, and you should talk to your doctor about a plan that's realistic for you.) Here's the payoff. Research says that you can build bone density and ease the symptoms of arthritis, high blood pressure and even depression. If this stuff came in a pill, it'd be hotter than Viagra and Effexor put together.

Like a lot of people, I spend most of my days on my butt. Yet I have a beautiful heartbeat. When I see my doctor for my weekly health monitoring, he smiles appreciatively as he presses the stethoscope to my sternum, praising my "slow, steady, runner's rate." And last summer, shortly before my lung surgery, the respiratory technician was similarly complimentary. "Look at that pulmonary function," he said encouragingly as I puffed into a tube. "I can always spot the yoga people."

Now here's what you need to know about me. I was always chosen last in gym class. I can't open a jar of pickles without assistance. I don't train for marathons. I will never be on the cover of a magazine, Valerie Bertinelli-style, flaunting my abs. I have a body that's over 40 and has birthed two children, and looks it. And many days, I don't want to get out of bed. But I put in three and a half hours of exercise a week – mostly running, mixed with the use of a pair of five-pound dumbbells and a yoga app on my phone. I breathe hard. I stretch muscles. I resist gravity. Then I'm back on my butt, possibly holding a beer. That's it.

Good health should not be reserved for the perky sporty types. Screw the jocks. Almost everybody, of every age and fitness level, can afford a half-hour a day. You can. Why am I telling you this? Because when the surgeon had to cut some cancer out of my lung last August, I was pretty happy I could breathe unassisted afterward. And because I hope that if you're ever in a similar situation, you are likewise prepared.

This year, it's not about fitting into those jeans that linger accusatorily in the back of the closet. It's not about the scale. It's about getting in touch with what we humans were meant to do – move around. It's about taking the stairs. It's about being able to play with your kids. It's about those sweet, sweet endorphins. And it's about knowing that though we're all different, we're all capable of greater wellness. Is it hard sometimes? Does it get boring at times, day in and day out? Sure. Is it achievable, and is it worth it? Always. But don't listen to me. Listen to my beautiful heartbeat. Now get out there and thump along. And tell me about your progress -- I'll be right alongside, cheering you on.