The trouble with "values voters"

The Iowa results reveal the hypocrisy behind their proclamations of morality 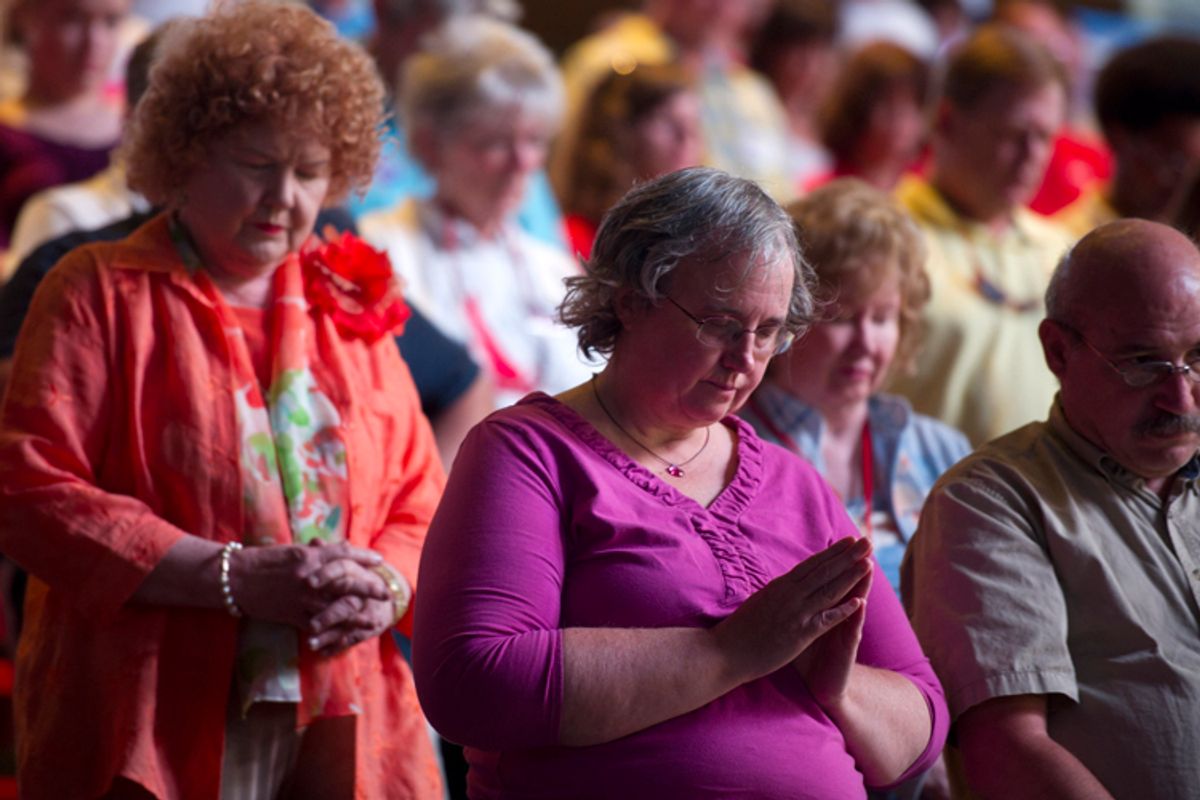 Will the prayers of Iowa voters be answered? (Reuters/Daniel Acker)
--

Having previously taught for some years in Cedar Falls, Iowa, we can claim up-close knowledge of a culture that the media has inspected, prodded, polled and broken bread with, day after day, for many months.  The Iowa caucus has revealed a widespread affinity for “family values” – who would’ve thunk it?  Or maybe it’s as predictable as the pledge of allegiance.

Rick Santorum’s fireside sweater vests won in Iowa.  Santorum’s family man uniform vied successfully with Mitt Romney’s mechanical corporate image, Ron Paul’s icy charm, and Michele Bachmann’s 6,000 foster children.  Portentously (and meaninglessly) defining his campaign as the “cause of liberty,” Santorum ended his valedictory speech after midnight the same way he began it: talking about his wife and kids and “the dignity of the womb.”

The current model of conservative campaigning shows that there are two Americas.  We’re not so much talking about the haves and have nots, although many minds have been so twisted as to imagine that the 2012 contest is between capitalism and socialism.  Rather, it’s Apple vs. Apple Pie, and open-minded, 21st-century creativity vs. a more repressive, small town “Happy Days” routine, where “Leave It to Beaver” families flourish.  If you want to reexperience the 1950s, there’s still a taste of it in Iowa.  They’re not all stay-at-home moms, but the celebration of “true conservative” breeding has yet to contend honestly with its bastard brother: blindness to the dysfunctional family writ large that is America.

So many of the Iowans interviewed on TV amid the Santorum surge focused on the “values” he ostensibly lives by.  He who has bred the most children is the best candidate, and American values win.  It seems to be that simple for the values voters.  You choose a president not because he is best equipped or qualified for the job, but because his “family-oriented” positions make him the most qualified. As the nation’s chief executive, Santorum would keep Jesus in Christmas, and everything else good will flow from there.

The real problem facing “values voters” is that what they believe in is a humongous lie.  The yearning for a “forever '50s” churchgoing America overlooks a moral hypocrisy, no less profound than that of Romney supporters who are convinced that 1 percenter greed is no more than a blip on the radar, and business will save America from socialism.  The Republicans’ Iowa advertising assault revealed a cynical depravity of unprecedented proportions – at least since the monopoly-led Gilded Age.  And all of this as we were going through the “season of giving,” with its hopeful Christmas message of love and harmony.

What better proves that America has lost its moral compass than the campaigning in Iowa?

Santorum gained ground in Iowa as Gingrich’s past caught up with him.  But are Rick’s ideas of family values healthier than, say, your garden-variety loving gay parents, whom he rails at for their immorality? Rick Perry was so desperate for votes that he fell in lockstep with conservative darling Mike Huckabee by declaring that he now believes that abortion should not be allowed in cases of incest. Not that Perry is known for his sharp thinking, but, really, is this the moral high ground?  Who are the victims of incest?  Children – young girls manipulated and raped by their fathers.  Given the ongoing Penn State controversy, in which a football coach is on trial for raping young boys, it is deeply disturbing that children are being used as political pawns. Is it less heinous for a father to rape his daughter than for a coach to rape a boy?  Is forcing a young girl to give birth really a principled stand based on family values?

So, what qualities are “values voters” really looking for?  Americans’ ideal man of presidential character has always been the first president, George Washington.  Never mind that the real Washington was a hungry speculator in land, an aloof man with a hot temper, who made sure his aides saw to it that no other general upstaged him.  He was, in fact, universally admired for his detachment, civility and sacrifice.

Washington was fortunate in not having to run against anyone when he stood for the highest office in the land.  About as fast on his feet as Rick Perry after a long night, he did not know the first thing about engaging in clever repartee.  He studiously worked at concealing his volatile temper, and learned, step by step, that governance required moderation rather than angry words.  Washington became, in death, what Ronald Reagan has become to the Republican Party: a kindly, fatherly protector, distant head of the national family.  But Washington himself would probably be heckled off the stage at a Republican presidential debate.

Do we need more proof our values are disappearing?  Thanks to the Supreme Court decision in Citizens United, we are less and less of a democracy.  Flag pin-bearing Republicans constantly proclaim us the “freest people in the world,” when, in fact, the power of the franchise actually means less than it has in ages.  The absurd districts created by gerrymandering limit change in Congress.  Corporate giants write arbitration clauses into contracts that make it impossible for their ugliest abuses to get an airing in court.  CEOs and their political allies are enriched, and decent people are crushed under the weight of greed’s power.  Blindly proclaiming ourselves “the freest people in the world” has become as much of a fairy tale as young George Washington’s cherry tree chopping.

In “A Christmas Carol,” the lessons Dickens provides are timely and enduring.  Moral worth is measured, as Scrooge came to learn, through the joy of giving, whether in providing charity for the poor, insuring a fair living wage for Bob Cratchit and others of his caste, or paying for medical care for Tiny Tim and the daily multiplying millions. Lest we forget Tiny Tim, Santorum closed his victory speech Tuesday night by celebrating his own special needs toddler, supplying the “God bless” himself.  But a few weeks earlier, would the Tea Party crowd have cheered if Ron Paul were asked whether Tiny Tim should wither and die because he lacked health insurance?

Genuine moral values do not have to be broadcast.  And have we not yet learned that adherence to a particular religious creed or membership in a church does not insure moral action?  As Thomas Jefferson contended, believing in 20 gods or no god “neither picks my pocket nor breaks my leg.”  Morality can only be measured by a good life, he insisted.  For that observation, the social conservatives of his day branded him a Bible-burning atheist.

Those Christmas tales Americans watched last month are simple but not banal.  In “It’s a Wonderful Life,” George Bailey is saved because his friends and neighbors recognized his years of selfless devotion to their small town.  In the political atmosphere of today, however, as rewritten for the Iowa caucuses, cranky old Mr. Potter – not the popular, generous-spirited George Bailey – would be running for the nomination, and, at least for a week or two, garnering 30 percent of the vote for having vigorously protested “government handouts” while excoriating the deadbeats he had to throw out of their rental units in Pottersville.

As Mr. Potter -- or the departed Ms. Bachmann -- would tell you, go help yourself instead of protesting against the bankers who tanked the economy.  And stop looking to government, which is uniformly wasteful and inefficient, and won’t do you any good by injecting itself into your life and depriving you of your freedom.  It’s corporate America that works for you.  Even if it doesn’t respect you.

So, if these are conservative Republican pro-family moral values, what exactly does “pro-family” mean?  And are these “values”?