What's next for Michele Bachmann? 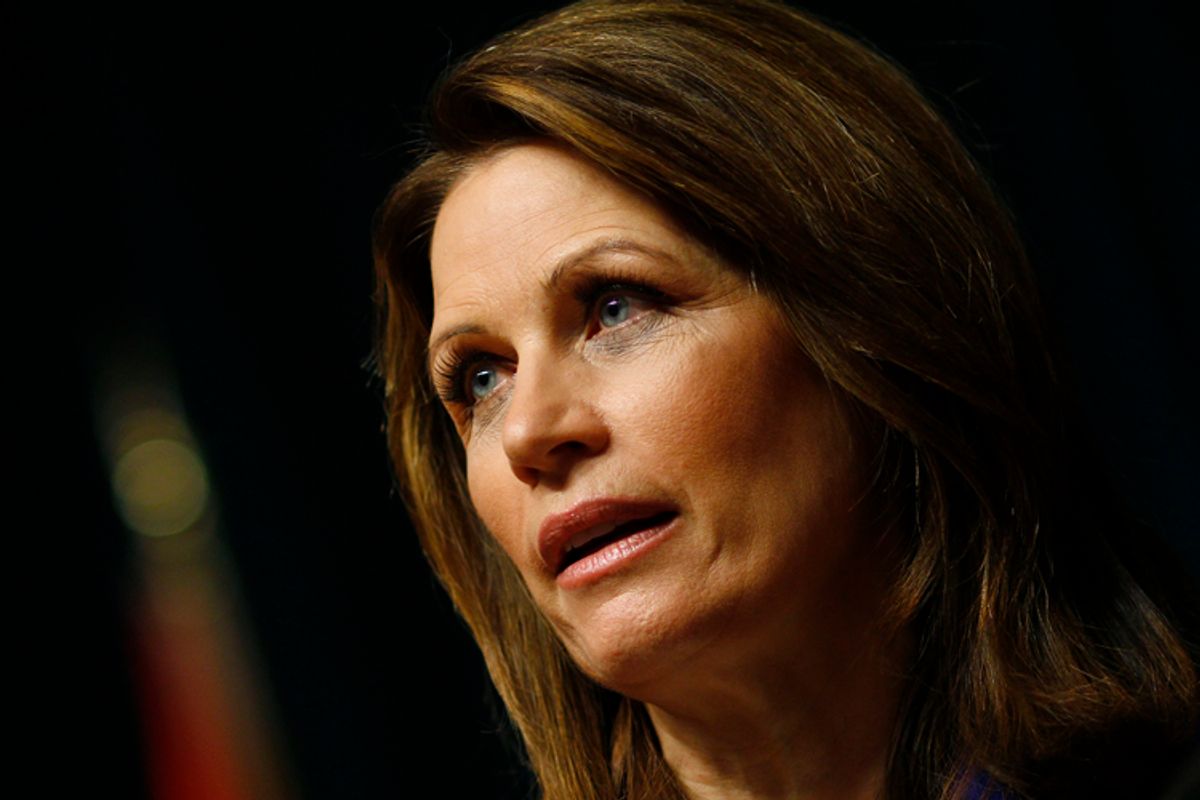 Michele Bachmann, a deeply deluded and irresponsible religious fanatic who until this week was apparently seriously running for president of the United States, has slunk back home to her oddly shaped Minnesota congressional district to brood on her future.

Politico declares her a "lock" for reelection, but that depends on whether or not she runs. She effectively promised not to, but that promise may have been predicated on her remaining a legitimate presidential candidate. (Minnesota law prohibits running for two federal offices at once.)

Bachmann is not a lock because she's particularly beloved in her district -- as longtime Bachmann critics have been at pains to point out to the national media, she never wins Stillwater, , [CORRECTION: St Cloud is her district's largest city. Stillwater is where Bachmann's home is. Dumb mistake on my part, apologies.] and she has tended to win tight races with help from third-party spoilers -- but because she is hugely popular outside her district, with a nearly endless supply of Christian right cash.

It's fun ("fun") for political observers to imagine her going up against Sen. Amy Klobuchar, but that would be nuts even for Bachmann. If she couldn't beat Ron Paul in Iowa among Republican voters, she's not going to win a statewide election in more-liberal Minnesota against a popular incumbent.

And I'm not sure she'd want to. As Ken Avidor, Karl Bremer and Eva Young point out, Bachmann has had an atrocious voting record since even before she ran for president.

Bachmann kept repeating in her concession speeches that she's not a politician, which sounds like boilerplate anti-Washington talk when coming from a candidate, but seems a little more like a statement of intent from someone conceding a race. Bachmann, who's been an activist since the mid-1970s and an elected official for more than decade, likely does not believe herself to be a "politician." A messenger, a prophet, a crusader, maybe. America's redeemer, sure.

But I'm not sure she'll even have the opportunity to "cash in" the same way Sarah Palin did a few years back. Bachmann cratered. Her own kind are sick of her and embarrassed to be associated with a woman who claims vaccines make babies autistic. She couldn't even convince Iowa evangelicals to support her over a Mormon and a Catholic.

It has been honestly disturbing to watch as a woman who was a local joke when I left Minnesota years ago rose to become not just a larger joke but then suddenly a national figure of some influence and seriousness, and that her rise was abetted by precisely the qualities that made her a joke in the first place -- her vicious small-mindedness and bigotry and self-evident idiocy -- is what makes people deeply cynical about the intelligence and decency of Other Americans not like themselves, to the detriment of our politics. So to see her roundly rejected is cause for some small celebration, even as hateful troll Rick Santorum rides his resentment-fueled momentum into the next contests.

So, honestly, who cares what Bachmann will do next? The future Bachmann deserves is one of total obscurity. It would almost be appropriate if this avowed "non-politician" remained an uninfluential absentee House of Representatives backbencher. Though it'd be much more satisfying if, say, Minnesota legalized gay marriage and Marcus divorced her to marry Ted Haggard at a wedding officiated by Keith Ellison.

Bachmann may not be making any detailed plans for the future, considering that she believes she'll be raptured away any day now, which both I and her apocalyptic death cult would likely agree would be a good thing for all involved.