Unraveling the GOP candidate's baffling statements about Israel and the Palestinians 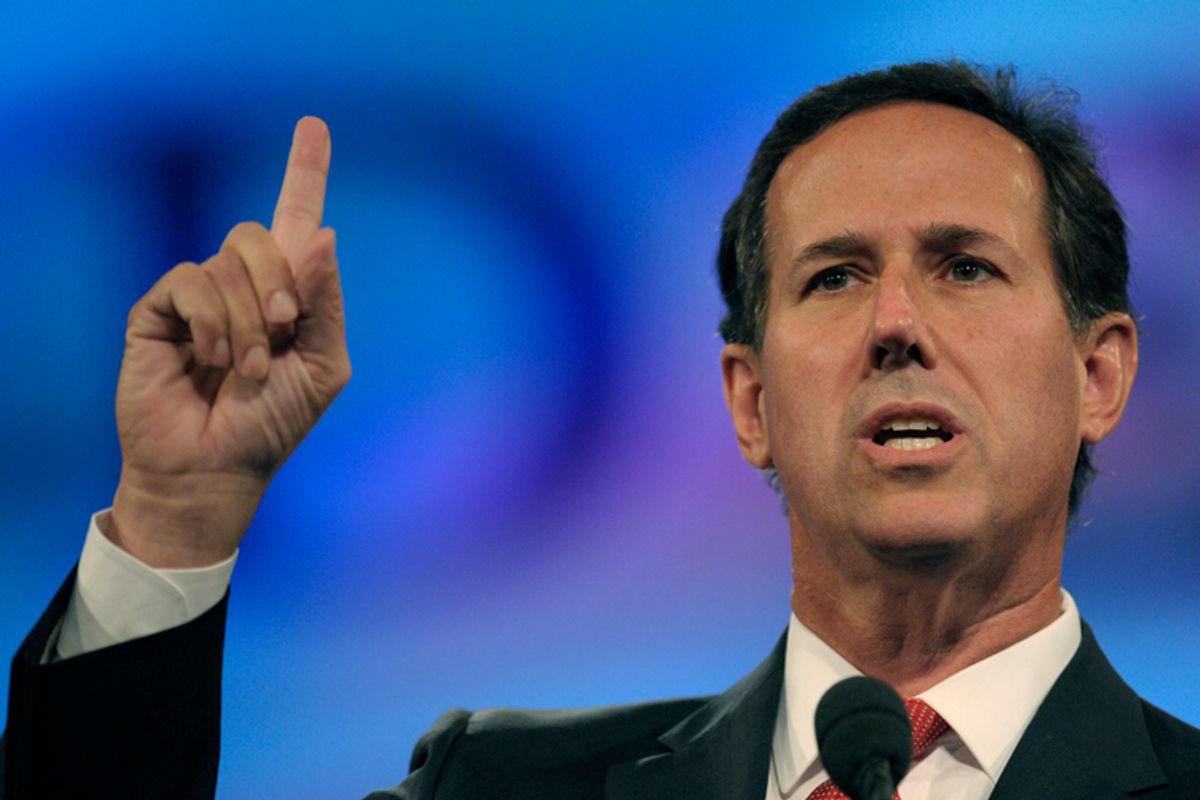 Following Rick Santorum’s sudden and unanticipated rise to prominence during the Iowa caucuses, there has been a rush to review the earlier and more obscure phase of his presidential campaign to see what newsworthy tidbits might have been overlooked when the spotlights were all shining on Newt Gingrich and Mitt Romney.

One of Santorum’s gems in the rough was initially uncovered back in November by the ThinkProgress blogger Eli Clifton and Philip Weiss, and returned to this week by a blogger at The Jewish Week . Santorum  said, among other things, "all the people who live in the West Bank are Israelis, they’re not Palestinians."

It was a reminder that two weeks before Newt Gingrich claimed that Palestinians are an invented people, Santorum had also denied their existence.

But whereas Gingrich’s vilification of the Palestinians was merely a nasty example of crude cynicism, Santorum’s seemed both more sincere and more intimately tied up with his ignorance not only of the question of Palestine but—more alarmingly perhaps—of American history as well.

In an informal discussion with a young man, which was aired on CNN, Santorum also said that Israel was the victim of an “aggressive attack on the part of Jordan and other countries,” that it had gained the West Bank in war—which is to say, fair and square.  He said it is no more realistic to expect Israel to give back the West Bank than it is to expect the US to give “Texas and Mexico back,” since they too were gained through war.

That’s not a typo, not a verbal slip. Santorum  refers to Mexico as part of the United States  three separate times in the two-minute interview.

In fact, Santorum’s mangling of Palestinian history is the least interesting thing about his statement. It was so baldly false that it raised eyebrows even at the New York Times and the Washington Post.  But it is still worth quoting in full in order to reveal what this vertiginous implosion of history, logic, syntax and grammar—a kind of Santorumian sublime—might tell us about what goes on inside the head of this man who would be president:

A rough translation of Santorum’s statement might go something like this: Having captured the West Bank in a war with people who don’t exist, the Israelis have every right to negotiate with themselves—but, come to think of it, there’s nothing to negotiate because they have a right to build stuff there since they own it anyway.

Or one could be more charitable to Santorum and surmise that what he was saying is that the territories which Israel has militarily occupied for more than four decades are in fact an integral part of the state, and that everyone living in those territories ought to be considered a citizen of the state, there being no separate “Palestine.”  As  the Times and Post  pointed out, this is precisely the argument proposed by Palestinian advocates of a one-state alternative to the two-state solution. They say  the obvious way to resolve the question of Palestine is to create a single democratic and secular state in all of what had until 1948 been Palestine, or in other words Israel plus the Palestinian territories it has occupied since 1967.  Unfortunately, the idea of a secular state of equal citizens is incompatible with the Zionist vision of an exclusively Jewish state, which is why Israel’s defenders in the US regard the one-state solution as the most dangerous threat of all.

Tempting as it is to think that a professed Christian like Santorum might actually have some faith in the core Christian values of sharing, forgiveness, selflessness, peace and justice (values that strangely seem never to play a role in what passes for so-called Christian politics in the US),  it is unlikely that he is a sudden convertto the just peace outlined by advocates of the one-state solution.

It is far more likely that Santorum simply got lost as he wound himself up in a web spun of his own rhetorical knots.

Oh what a tangled web we weave.... But  Santorum does not seem like the kind of guy who would actually practice to deceive.  By all accounts, he actually believes what he says. And that is what is so disturbing about his pronouncements.

“Is Mexico part of the United States?” he brazenly asks the young man in the interview.

“I don’t think so,” says his interlocutor, albeit somewhat quizzically.  “It’s not.  OK.”

After a pause allowing him to tactically redeploy his forces, Santorum tries again.

“Ah, is New Mexico part of the United States?” he asks.  “I think it is,” comes the inevitable reply.

Santorum then launches into his claim that territory--United Nations Charter be damned--can be grabbed by virtue of the right of conquest, in modern times just as much as in the Bronze Age, with the American acquisition of “Texas and Mexico” (that annoying “New” dropped again as the superfluous prefix that it is) as his case in point. One can only wonder whether he also thinks it was acceptable for Germany to grab France in 1940 or for Iraq to take over Kuwait in 1990.

Since it’s not entirely clear whether Santorum realizes that there is a difference between Mexico and New Mexico, or that the difference—insofar as it exists at all—is of much significance, we had better leave that aside and stick with what he has to say about Texas.

A quick refresher: contrary to Santorum’s account, the United States did not absorb Texas in a war with Mexico.  Mexico (unwisely) encouraged white settlers from the United States to settle in Texas, then one of its northern states. Eventually, those settlers rebelled against the Mexican government, and particularly against its prohibition of slavery, which was vital to the economic interests of the Texas settlers and their cotton plantations.  That revolution led to the establishment of the slaveholding Texas Republic, which was later absorbed into the United States—by treaty, not by war.

So let’s see: violent and racist settlers trying to wrest control of a territory they occupy. There are questions of negotiations, treaties, and national rights.  Sound familiar?

Obviously, what Santorum was trying to claim is that there is a kind of parallel between the history of the United States and of Israel—and he is right, though for the wrong reasons.  In his view, just as “we” took Texas and Mexico, “they” took the West Bank; and if we are right, they must be right too: it’s kind of an extension of the logic of Manifest Destiny to Israel.

Apart from historical accuracy, what’s missing from Santorum’s account of the history of the southwestern US, of course, is the enslavement of African Americans (which the founders of Texas sought to extend) and the extermination of American Indians. They didn’t exist, for the forebears of Santorum and Gingrich, just as Palestinians don’t—or might as well not—exist for those who pledge their unreserved support for Israel today.

Slavery, settlement and extermination are undoubtedly part of the history of the United States.  But there is another history to this country as well, involving a broad array of struggles for recognition and rights, by American Indians, by African Americans, by women, by minorities, including gays and lesbians so manifestly reviled by Santorum and his so-called Christian allies.  And maybe, just maybe, we can take some comfort from Santorum’s reference—however unknowing and unintended—to the history by which slavery and brutality were eventually transformed into something more befitting a nation founded on the principles of rights and justice.

Or perhaps not; perhaps we ought to recognize that historical niceties have little role to play in presidential campaigns, and that correcting the absurdities streaming out of the various GOP campaigns is a pointless intellectual exercise for which the vast majority of voters have neither the time nor the patience—historical niceties being among the hallmarks of the despised “liberal elite” from whom men like Santorum and women like Sarah Palin and Michele Bachmann offer to deliver the people.  There is something terrifying about the possibility that a contender for the White House can actually proudly cling to ignorance as one of his or her outstanding qualifications for the job.