After a handful of recess appointments, fears of a "January surprise" surface in conservative circles 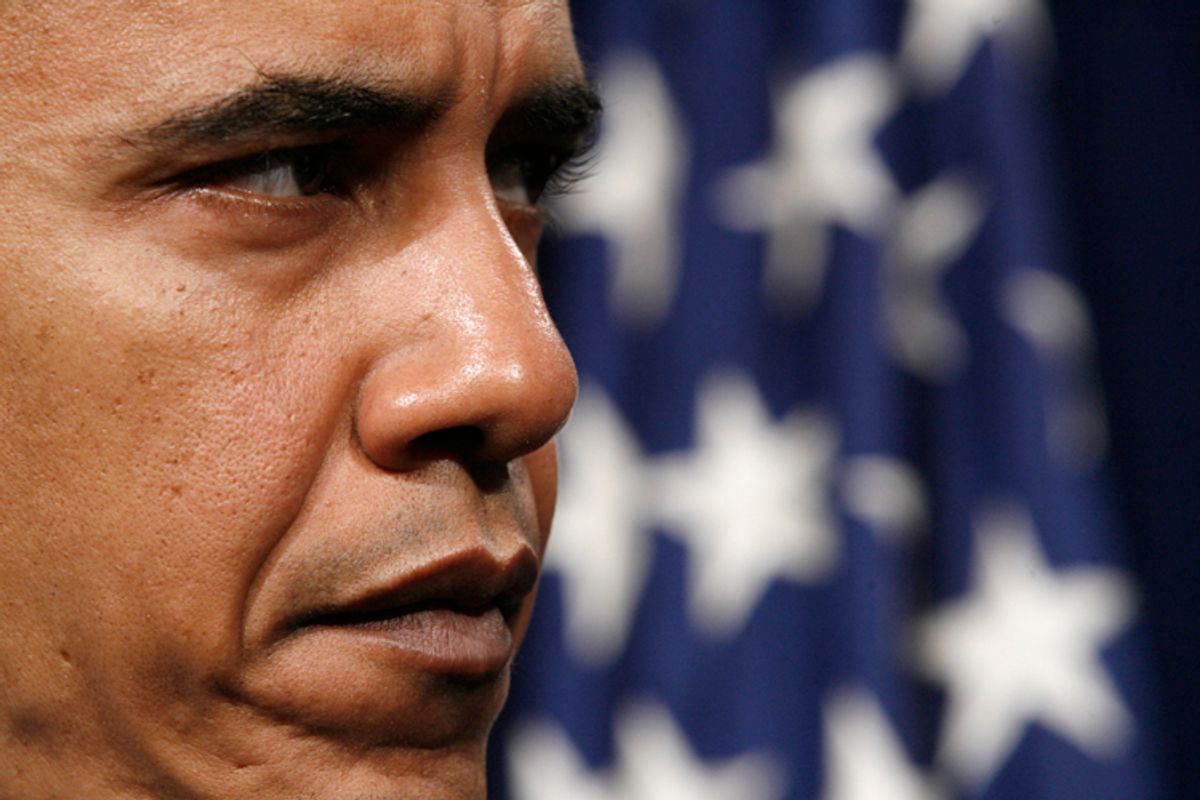 President Obama's bold decision to ignore GOP obstructionism and make recess appointments at the Consumer Financial Protection Bureau and the National Labor Relations Board started off 2012 with a bang, inspiring long-deferred jubilation among liberals and paroxysms of outrage from conservatives. There's an enormous irony here: After three ridiculous years in which conservatives unfairly and absurdly attacked Obama for impersonating a socialist tyrant, the president is suddenly acting like an actual leader -- and now the right is really freaking out.

Here's the nightmare scenario: What if Obama runs totally wild and uses his executive powers to fix the economy? He might, gasp, win reelection!

Citing speculation from Jaret Seiberg, an analyst at Guggenheim Securities, Pethokoukis paints a picture in which Obama recess appoints a replacement for the current acting director of the Federal Housing Finance Agency (FHFA), Bush appointee Edward DeMarco. DeMarco's job is to oversee the giant mortgage finance agencies Fannie Mae and Freddie Mac. DeMarco has long made it clear that he believes his primary job is to improve the financial bottom line of Freddie and Fannie, rather than employ the huge power the two government-sponsored enterprises (GSEs) exert over the residential mortgage market to make it easier for homeowners to refinance their mortgages and escape the threat of foreclosure. With DeMarco out of the way, so the theory goes, the Obama administration would have a free hand to push through a much more aggressive plan to help struggling homeowners.

That could lead to a mass refinancing program for agency-backed mortgages that would go well beyond the existing HARP program. That could hurt agency [mortgage-backed security] pricing and result in higher financing costs going forward. Yet it also could be a big boost for the economy and housing going into the election.

...[S]ome $3.7 trillion of mortgages would be refinanced. That’s right, this would be the Mother of All Mortgage Refinancing Plans. It would help roughly 30 million borrowers save $75 billion to $80 billion a year. As Mayer puts it: "This plan would function like a long-lasting tax cut for these 25 or 30 million American families." ... Talk about a political and economic game changer in this presidential election year. Obama could offer a trillion-dollar stimulus -- as measured over a decade -- that would directly and immediately impact tens of millions of Americans suffering from the housing depression. Cash in their pockets. Imagine the electoral impact on key states, such as Florida, suffering from both high unemployment and devastated housing markets.

If only. As a Federal Reserve white paper analyzing problems in the housing sector and reviewing potential solutions noted on Wednesday, 12 million U.S. homeowners are currently underwater on their mortgages. The steady flood of newly foreclosed properties hitting the market -- expected to be a million per year in both 2012 and 2013 -- exerts a relentless downward pressure on home prices. There are few things the Obama administration could do that would have a bigger positive effect on the overall economy than a really large-scale program of homeowner relief.

So how realistic is the January surprise scenario? As with all good conspiracy theories, there are some grains of truth. DeMarco has definitely been obstructing the Obama administration's efforts at housing reform. Even the usually mild-mannered Federal Reserve hints at this reality in its white paper. Sure, there would be a cost to a large-scale refinancing program, but the benefits might well outweigh the downside:

"Nonetheless, some actions that cause greater losses to be sustained by the GSEs in the near term might be in the interest of taxpayers to pursue if those actions result in a quicker and more vigorous economic recovery.

Protecting Fannie and Freddie's balance sheet at the expense of the nation's is penny-wise and pound-foolish, in other words. Why go to all the trouble and expense of bailing out the GSEs if not to use them to good effect?

However, that still doesn't quite connect the dots between the appointment of Richard Cordray to run the CFPB and a possible recess appointment that would replace Edward DeMarco. First of all, the Obama administration's efforts to reboot housing have been, at best, halfhearted, and their failure more properly should be blamed on the White House than a single agency administrator. (And late Thursday afternoon, Bloomberg News reported that the White House was denying it had any new refinancing plan in the works.) Secondly, the legal basis for shoving out DeMarco and replacing him with a recess appointment seems especially iffy. Cordray is considered an independent regulator -- so, theoretically, he can't simply be fired at will by the White House, (although his "acting" status does inject some fuzziness into the equation). According to reporting by Ezra Klein and Brad Plumer, Treasury Secretary Timothy Geithner explored the possibility of firing DeMarco, but ultimately found it unfeasible. Republicans are already threatening to sue the administration for the current batch of recess appointments; axing the existing director for the FHFA in pursuit of an election-year housing reform agenda could easily precipitate a constitutional crisis.

But then again, Republicans would only have themselves to blame for the chaos that would ensue if Obama did take the unlikely step of all-out war. In 2010, the Obama administration proposed North Carolina banking commissioner Joseph Smith as its nominee for FHFA director. But as with so many of Obama's economic-policy-related nominations, Smith's appointment by the Senate Finance Committee's ranking Republican, Richard Shelby, was scuttled on the grounds that Smith was unlikely to resist Obama's housing reform agenda.

So there is after all a direct connection between the Cordray recess appointment and the FHFA. Senate Republicans have routinely blocked Obama's executive branch appointments, not because they have any particular problem with the quality of the people being proposed for the jobs, but because they want to block Obama's reform agenda. It's a travesty of government -- and a made-to-order campaign platform. Want to know why the economy sucks? Because Republicans won't let Obama appoint the people necessary to take direct action -- whether that be at the Federal Reserve, or the FHFA, or anywhere else.