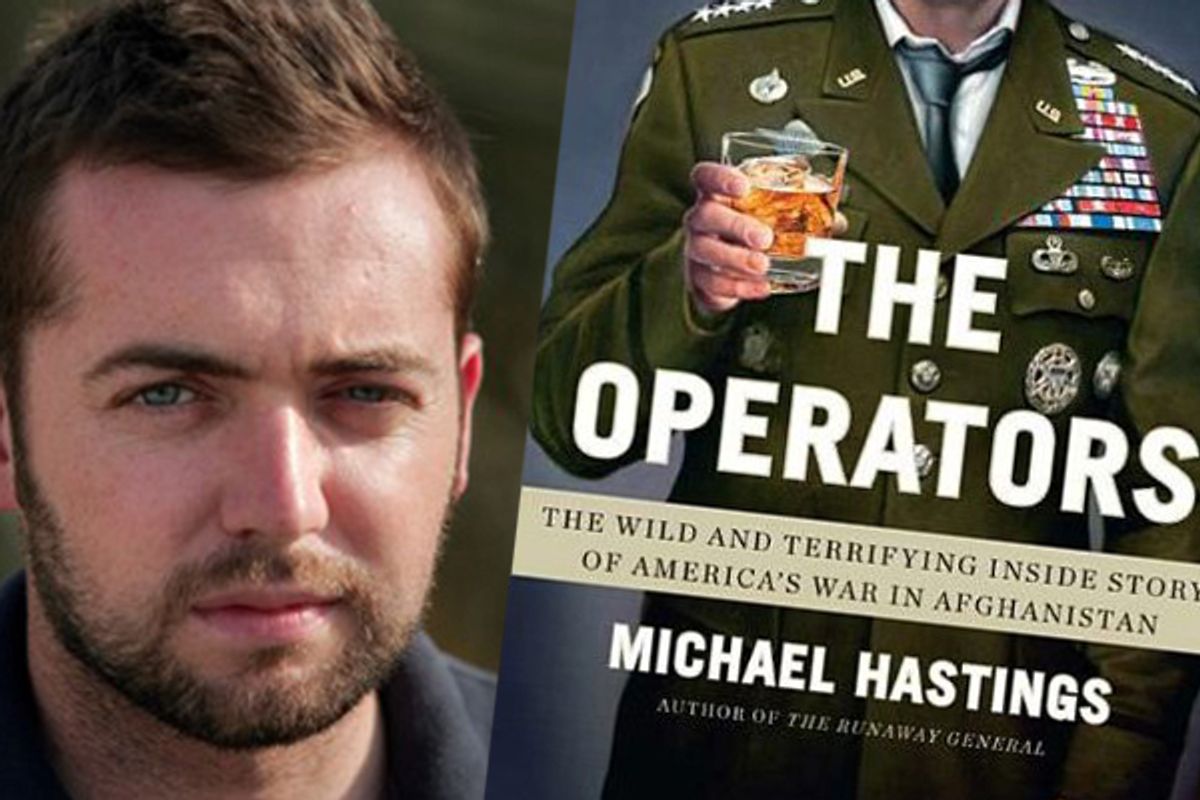 Rolling Stone's Michael Hastings -- whose 2010 article on Gen. Stanley McChrystal ended the Afghanistan War commander's career by accurately reporting numerous controversial statements made in a series of interviews -- embodies the pure journalistic ethos. Some of the most celebrated establishment military reporters in America attacked Hastings for that article on the ground that it violated a sacred trust between Generals and war reporters (The New York Times' John Burns), and even baselessly insinuated that he fabricated the quotes and then went on to impugn his patriotism when compared to The Great General (CBS News' Lara Logan).

Even worse, The Washington Post, ABC News and others irresponsibly published totally anonymous military sources claiming with no basis that Hastings violated ground-rule agreements for the interviews. In the face of that media-military onslaught, it would have been easy for this young reporter to protect his careerist ambitions and back down. Instead, he doubled down, accusing military officials of "lying" and then unapologetically explaining to these lions of American journalism that the role of a journalist is to scrutinize and expose -- not protect and glorify-- the nation's most powerful political and military leaders:

Look, I went into journalism to do journalism, not advertising. My views are critical but that shouldn't be mistaken for hostile - I'm just not a stenographer. There is a body of work that shows how I view these issues but that was hard-earned through experience, not something I learned going to a cocktail party on fucking K Street. That's what reporters are supposed to do, report the story.

That mindset shapes Hastings' superb new book on the Afghanistan War: The Operators: The Wild and Terrifying Inside Story of America's War in Afghanistan. The bulk of the book is devoted to his experiences in Afghanistan and his examination of how the war has been managed and the propaganda that has been disseminated to sustain it. Because Hastings writes as someone who expressly believes that U.S. should not be in Afghanistan, and (even more rarely) as someone who has no concern whatsoever for whom he offends by reporting the truth, the book provides vital insights about the war and how it has been run that are not available anywhere else.

Hastings' exposé on the war is what has received the bulk of the attention in book reviews -- both positive and negative (The Wall Street Journal amusingly compared him -- as though it were a grave insult -- to Vietnam War reporters David Halberstam and Neil Sheehan for the crime of reporting the negative aspects of a war and the government deceit behind it). But his discussions of national security journalists and how the Pentagon uses them are at least equally valuable. First, consider how Gen. McChrystal viewed the role the American media played in helping to sell the Iraq War:

When even George Bush's own Press Secretary and his Pentagon spokesman mock the American media for its mindless subservience to government war propaganda -- and when even the war General who is a the subject of a glowing Atlantic profile derides the writer as "totally co-opted by the military" -- perhaps that's a sign that the profession (also known as: The Liberal Media) should take account of the actual function it serves. The other lesson from this passage is, as Hastings put it to me by email: "Though these big time journalists like to view themselves as 'peers' of McChrystal and the generals, the generals often view the big time journalists with a healthy dose of contempt." People who are easily and eagerly used are often appreciated for the value they provide, but are rarely viewed with respect.

Then there's the reaction of many establishment journalists to Hastings' Rolling Stone article on McChrystal -- a reaction that did as much to expose their mindset and the role they play as any other single incident:

One sees this over and over; there is a perverse, inverse relationship between the amount of power someone wields in Washington and the willingness of most establishment journalists to engage in reporting that exposes or embarrasses them. These journalists love to swarm with contempt on the marginalized and powerless in their world (people and groups like Julian Assange, Occupy Wall Street, Christine O'Donnell, Ron Paul, Dennis Kucinich, etc.), but when it comes to those who exercise real power and are members in good standing of the Washington establishment -- war Generals, senior White House officials, corporate officials and lobbyists -- they tread with extreme caution when they do anything other than obediently convey messages. That dynamic is supposed to be precisely the reverse for a real journalist, which is why Hastings was genuinely confused and confounded at first by the angry reaction to his article from his (ostensible) peers.

But Hastings ultimately realized that these were not his peers at all, because they were engaged in completely different functions. Whereas Hastings viewed himself as an "outsider" reporting on those in power, these journalists very much viewed themselves as insiders, with a function not to report on those in power but to serve them. Hastings entitled Chapter 43 of this book the "Media-Military-Industrial-Complex" to make this point clear:

This is exactly why these journalists were so offended by Hastings' career-ending reporting on McChrystal: because they so identify with the powerful officials whom they "cover" that any harm to those officials is viewed as harm to these journalists themselves -- much the way that aides to a Senator get angry when a newspaper article reflects poorly on their boss. That same dynamic was quite visible when it was media figures who tellingly led the chorus of anger and scorn against WikiLeaks for doing what should have been those journalists' job: namely, exposing the secret corruption and illegality of the world's most powerful political and corporate factions. But because those journalists see themselves as integrated members of those factions, they reacted with as much anger to that exposure as government officials themselves. That's because there is no real division between these media figures and the political officials whom they cover. That is exactly what explains the anger toward Hastings from his fellow national security journalists for the crime of reporting in a way that reflected negatively on the Honorable Gen. Stanley McChrystal.

Ordinarily, I would urge as many people as possible to buy the book of someone like Michael Hastings solely in order to support the kind of journalism he does: the more successful his book is, the more it bolsters this journalistic approach and the more of a repudiation it is to the power-serving reporters who attacked him. But this book is very worthwhile in its own right. The Afghanistan War is now more than ten years old with no end in sight, and this is one of the most eye-opening accounts provided yet about why it has dragged on, from one of the bravest and most intrepid journalists who has covered it.