I want to challenge my own anxiety about nudity. But can I really handle downward dog without any clothes on? 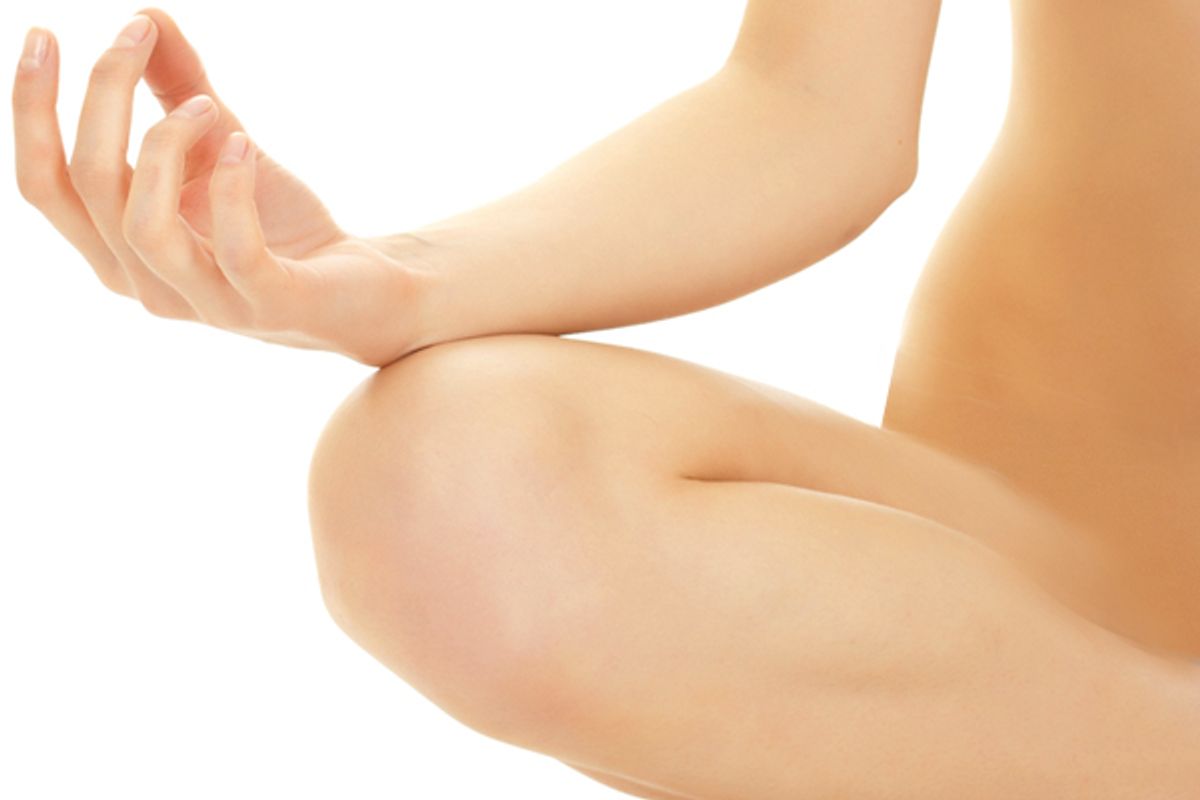 My instructor looked at me from the head of the dim room and smiled. Not in a creepy way, more in a "you can do this!" way. But I wasn't so sure. I had struck a Warrior One pose a thousand times before, yet I still stumbled into the person next to me more often than I cared to admit. Normally I'd just offer a little self-deprecating shoulder shrug and move on, but what would I say in this situation? "Oops! I just ran into your bare penis"?

I had enrolled in a naked yoga class on impulse. My husband was gone for two months that summer, and in my solitude, I began a spiritual exploration of sorts, signing up for Buddhist book groups, taking long, contemplative walks, and reading a good deal of Eckhart Tolle. I was in a normal, fully clothed yoga class when I struck up a conversation with the woman I'd been paired with for partner poses. She was incredibly flexible.

"I'm actually a yoga teacher myself."

"Oh, like hatha? Vinyasa?" I asked, eager to show off how yoga smart I was.

I blinked. She repeated it for me.

Not only did naked yoga exist but apparently it was a very active community. Here in Austin it was typically organized through MeetUp.com, she explained, since most mainstream gyms and yoga studios were hesitant to host classes, much less announce them on their Google calendars.

"You should totally come sometime," she told me, sensing my genuine curiosity. "A lot of my students are there because they want to go deeper in the practice, and the naked part makes you a lot more vulnerable, more open. It also helps people conquer body fear stuff, and who doesn't have some kind of anxiety about their own body?"

I think we all have a secret "what if?" file in our minds, some sort of pathological fear mixed with the seeds of courage. What if I ran a marathon? What if I tattooed stars to my face? Marathons and face tattoos don't hold any appeal for me, but right then, I felt the secret thrill of a challenge I had not known I was seeking.

"When's your next class?" I asked.

Here's why I said yes.

About eight years before, in college, I had taken a Drawing II class where our first big assignment was to draw a live model. He was older, much older, and I was so embarrassed about looking at his penis. I scanned around the room so I could share a giggly, uncomfortable grin with another student, but everyone was already looking down at their sketch pads, engrossed in their drawings.

I turned back to the man and felt my eyes adjust like a camera lens. Instead of seeing the most private part of this man's body, the thing that he made love with and the thing that he went to the bathroom with, I forced myself to see a series of shapes and light gradations between his legs. And then I drew those shapes and that light, and over the course of several days, the additional planes that made up his whole, fascinating body.

This episode shifted my thinking about nakedness. As Americans, we tend to amp up the taboo factor of the naked body. In France, bare breasts in a magazine could mean: "I keep my body clean with this all-natural soap!" But in America, bare breasts in a magazine mean PORN. My own body during college was a matter of constant frustration. At the time I took that class, every calorie I consumed was done with scientific calibration. I didn't look at my naked self in the mirror much, but I weighed myself every day. My boyfriend complained about my sharp pelvis, which poked him at night as we slept. When he hugged me, his fingers fit neatly into the valleys of my backbone.

My friends finally forced me to see an on-campus counselor, who encouraged me to keep taking art classes. Specifically, the ones with live models.

And it stuck with me. I still have body hangups, but I know a good "different way of being naked" when I see one. This particular opportunity, naked yoga, would be healthy for me, I thought. Freeing. Liberating!

"Oh, and one more thing," my yoga partner said cheerfully. "It's coed."

The next day I strolled into the studio, acting nonchalant. My heart was beating like a drum.

"Are you here for pilates?" the pretty desk girl asked.

"Nope!" I answered, looking at her meaningfully.

She led me to a door that opened up to another door, and beyond that, a dark blackout curtain. I parted it nervously.

Before me were eight nude men, mostly middle-aged and seniors, all doing the usual pre-yoga class routine: Smoothing out their mats, stretching, meditating. The gentleman directly to my left was getting a head start by doing some downward facing dog, and I had to step carefully through the doorway so as not to hit his curiously sun-spotted butt with my purse.

I looked around the room to see if I had missed any women.  Maybe a sweet old hippie lady curled up on one of these mats?

"You know, you can wear underwear if you like," said my instructor, sensing my timidity. "Whatever you're comfortable with."

A popular euphemism for "naked yoga" is "clothing optional yoga," but for me, opting for clothing would defeat the whole purpose. Naked yogis flock to the path to achieve radical body acceptance, after all. Also: If I learned anything in my college art classes, it's not that raw nudity was sexual so much as the suggestion of nudity. Leaving some parts teasingly covered. Botticelli knew it, Victoria's Secret knew it, and I knew it. I was going all. The. Way.

We started out the class by standing in a circle and introducing ourselves.

"I've been coming to class for about a year now," said George, a rotund man who looked to be in his mid-to-late 60s. "I used to drag my wife along with me, then she stopped." He paused to sigh. "But I still come."

Variations of George's story echoed all around the circle. In fact, most of the guys had originally attended with their girlfriends or wives, but when they quit, the men kept going. Had it started out as a bonding activity for these couples, I wondered? A daring adventure to try together, after the thrill of swing dance lessons wore off? And what was it that kept the men coming back, I wondered?

We started our first sequence, a basic sun salutation.

"Just swing your arms up, over, and bend at the waist down to the floor," said my teacher.  "Then we're just going to hang out in down dog."

It takes a while in naked yoga to forget that you are naked. During our sequences, I kept giving myself all these paranoid little reminders: "Don't fall over. Don't look at that guy's penis. Are you on your period? Don't look at that guy's penis." And like that dog in the dog food commercials, the one who always exclaims to himself, "BACON!" the word "NAKED!" constantly flashed in my mind.

They say that the novelty factor of naked yoga takes some time to wear off, but that if you go often enough, you learn to feel more at home in your body. Less like it's this freaky stranger, your nude self. People have nightmares about being naked in public. If you can conquer this fear, the benefits are powerful.

Still. In class, I was having a hard time breaking through to that higher state, the one where society and cultural norms don't exist. The room was dark, but I could still see everybody – eight naked dudes – and surprisingly, this was a lot more distracting than thinking about them looking at me. I closed my eyes and focused on my breath, trying to lull myself into something like a meditative state.

In between breaths, I started to make out this very faint memory, like a grainy homemade video. But I forcefully turned it off.  Nuh-uh-uh! I scolded myself. No thinking. But the image was insistent, growing brighter and clearer with each breath. Finally, I allowed myself to watch.

I saw myself when I was tiny, probably 4 years old, playing in the backyard. We had just gotten a sprinkler, one of those rotating ones marching along a high arc, then zipping back to its starting point. It was summer in Texas, scorching hot. I remembered shrieking as I ran in and out of the sprinkler's path, daring it to touch me. Of course I was naked. The sprinkler's streams made an itty bitty rainbow in the sun's rays, and when the water started spraying me again, I screamed and laughed at the same time. I thought life couldn't possibly get much better than this.

When I opened my eyes seconds later, I was back in the dim studio, and the guys were all there. We were now in tree pose.

After another pose sequence, we would pack up our things. We'd all put our clothes back on, and drive home to our families and our dinners, and if we had partners then maybe our nakedness would reveal itself later that night, or maybe it wouldn't. Regardless, our bodies would settle back into their old, familiar ways of doing things, and stay politely covered in the process. At least mine would.

When I tell this story to people now, I try to tell them about that memory. Of being that kid again for just two seconds, gloriously naked and free. I tell them this is why people take naked yoga.

"Right," they say, with a hard eye roll. "It's not at all because a young, pretty girl teaches it. Or because other young gals come to join."

And maybe they're right. Maybe it's just a roomful of pervs. But I think it may also be a roomful of people who have lost something, and they want it back. To feel that pure joy again, to inhabit a body that feels simpler and shameless. Even if it's for only two seconds.

I don't think it's going to be my particular path to liberation. I'm not sure I'll ever go again. I tell myself it's too charged of an environment to be relaxing, that if I crave peace, all I need to do is strap on my shoes and take a walk. But I know the real reason. I'm just too Puritan for it, worried about what people would say, worried about how they would look at me.  And maybe that's why I secretly miss naked yoga: It's the one place where looking really isn't the point.

Tolly Moseley is a writer in Austin, Texas. She has performed with the national comedy showcase "Mortified," where people read their old adolescent diary entries to a room full of strangers. She is also an annual speaker at SXSW Interactive on multimedia storytelling. Follow her @TollyM.