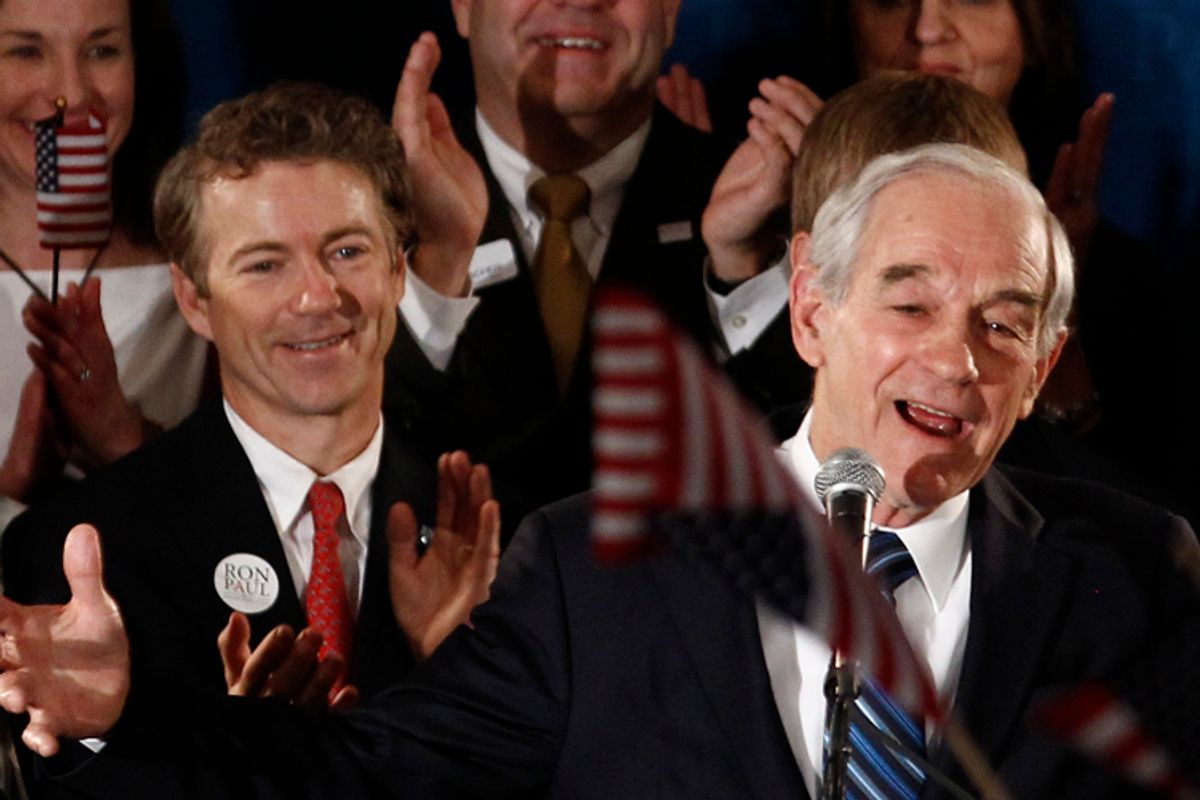 Ron Paul posted his best-ever showing in a major presidential nominating contest earlier this week, and he may be about to one-up himself. Paul finished in third place in Iowa with 21 percent of the vote, and the latest poll numbers from New Hampshire show that he has a real chance to increase his vote share and finish in second place next Tuesday.

By this point, everyone knows that Paul has significantly expanded his support from his last presidential campaign (and, for that matter, from his first one, when he ran as the Libertarian Party's nominee in 1988), even though he faces some very real and very unique intraparty barriers that make it all but impossible for him to win the nomination. This has stoked fear among some Republican leaders that a vanquished Paul might simply decide to pursue a third party bid in the fall, taking his army with him and potentially costing the GOP its shot of ousting Barack Obama.

That possibility seemed to reach new heights in the home stretch of the Iowa campaign, when influential conservative voices -- not to mention most of his fellow candidates -- responded to the possibility of a Paul victory by essentially declaring him excommunicated from the Republican Party. It was easier than ever to imagine Paul, who has already announced he'll retire from the House this year, deciding the process was rigged against him and using the Libertarian nomination as the ultimate revenge vehicle.

But the past week has offered something of a reality check. While the attacks haven't stopped, GOP elites have dialed back their anti-Paul hysteria, partly because they are now more confident that his power within the party is contained (he didn't score the breakthrough Iowa victory they feared) and partly because they are more mindful of the third party possibility. At the same time, Paul himself showcased the most compelling argument against waging a kamikaze mission this fall when he brought out his son to campaign for him.

47-year-old Rand Paul didn't enter politics until 2010, but he's already made national inroads that have eluded his father for his entire career. When Rand Paul ran for the Senate in Kentucky in 2010, he did so against the state's GOP establishment but with crucial assistance from some powerful movement conservatives -- most notably Jim DeMint, the South Carolina senator and Tea Party godfather. In posting a landslide victory in the GOP primary and winning solidly in the fall, Paul showed political savvy not normally associated with his family name, modulating his foreign policy pronouncements to ease the fears of GOP hawks and learning to market himself to a broader electorate that doesn't share his ideological fervor.

By contrast, when Ron Paul ventured out of his House district to wage a statewide campaign in Texas, he lost by 57 points to Phil Gramm in a 1984 Republican Senate primary. With his quirky libertarian bent, Paul was a lonely man in that race, and the isolation he experienced helped push him toward taking the '88 Libertarian nomination.

Ideological differences between father and son are virtually nonexistent, but Rand Paul may not face the same hard ceiling within the Republican Party that his father does. Nor is Rand burdened by the extremist paper trail that will dog his father for as long as he remains on the public stage. This offers Ron Paul a different, more meaningful way of enjoying the last laugh in his war with the party establishment: Stepping aside gracefully at the end of the GOP primary campaign and handing off the family political franchise to his son.

The logic is compelling. The Paul libertarian economic message is becoming increasingly mainstream in the Republican Party, as the growth in Ron Paul's support between 2008 and 2012 attests, and long-term trends suggest the GOP will only move further to the right in the years ahead. In other words, if there's an open presidential nomination in 2016, Rand Paul could be a major factor -- starting with the base that his father now enjoys and expanding it in ways he never could. Or maybe he'd have to wait until 2020. Either way, though, it's not inconceivable that Rand Paul could ultimately mount a successful campaign for the Republican nod.

But if the Paul name were to turn into the Republican equivalent of Nader, the fallout could threaten the inroads that Rand has made and his otherwise bright future in the party. Against this backdrop, Ron Paul's third party dilemma doesn't seem like one at all. He could run this fall, garner a lot of press attention, win five to ten percent of the vote and maybe keep Mitt Romney (or whomever) out of the White House. Or he could resist the urge and then watch with pride a few years from now when his son plays the presidential game for real.