The idle rich of the PBS costume drama are hopelessly out of touch. So why are so many Occupy supporters obsessed? 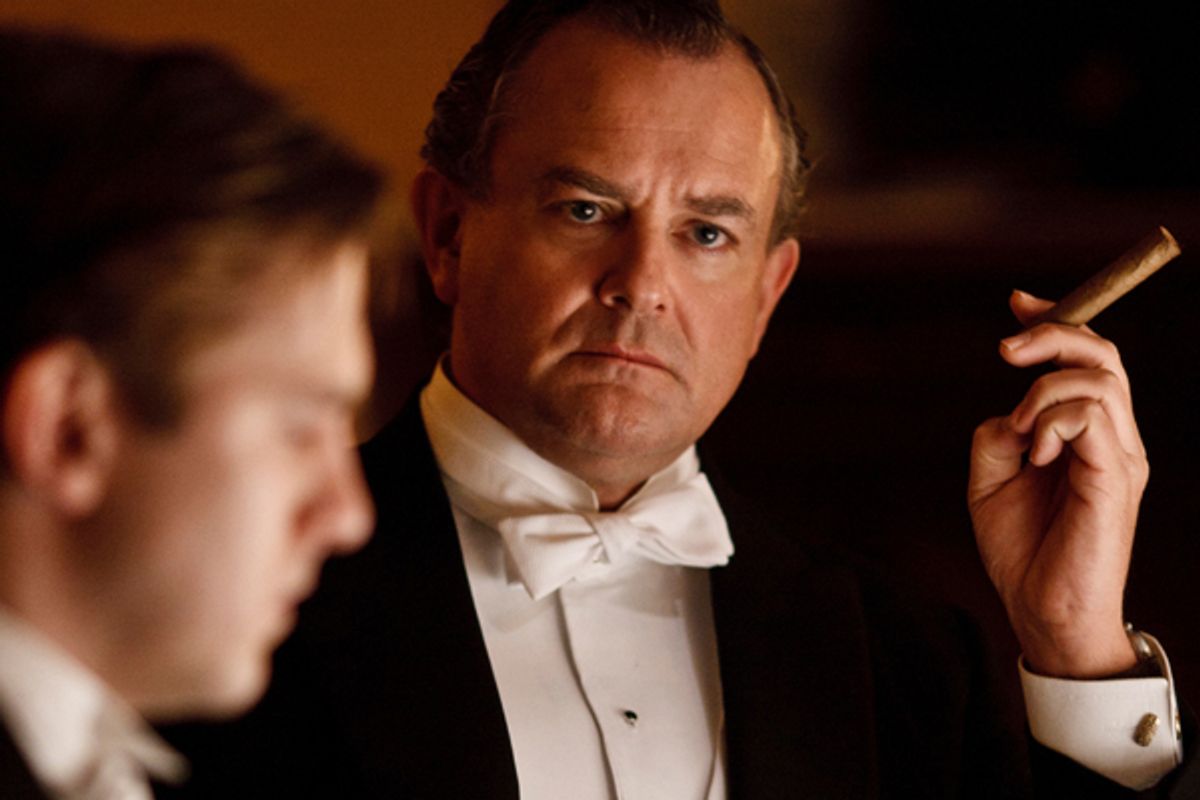 The return of the British television series "Downton Abbey" to PBS for a second season Sunday thrills a demographic that doesn’t usually find common cause with monarchist Tories: progressives and feminists, who, judging from the Internet, are utterly obsessed. But whether this is a triumph of production values (or character development) over politics depends on how you read the goings-on in the stately home.

Is the show ultimately a defense of the flawed yet often alluring world it portrays? After all, the monarchist Tory in question is plummy-voiced writer and creator Julian Fellowes, a life peer who is married to a royal lady-in-waiting. (If you’ve seen the show, you'll understand when I say he is more Carson than Branson. If not, catch up on Netflix.) Fellowes told the Guardian recently, "At the risk of sounding sentimental, I believe the monarchy stands for a fairness that we like to think represents us. I hope 'Downton' has that kind of decency about it."

This must be why the first season of the show so often sets up a challenge to the aristocratic order, as the characters chafe against their roles, only to finally find fundamental honor in them. The most egregious example in the first season was, of course, cousin Matthew, the middle-class lawyer and new heir whose very employment staggers the noble Crawleys. He even insists on dressing himself! Like most viewers must, he finds the Crawleys of Downton idle and overindulged, but a stern conversation with the Earl makes Matthew realize he is causing silent heartbreak to his valet, whose dignity -- not just his livelihood -- rests in adjusting Matthew’s cuff links. As Guardian writer Tanya Gold wrote, “In 'Downton Abbey,' the class system exists for the benefit of those at the bottom.”

This is, to say the least, a more pressing question in the British political context, where Fellowes has occasionally come under fire, than for Americans, even liberals, for whom the British aristocracy is just a quaint relic we're terribly happy to have gotten rid of centuries ago. There are other reasons to overlook these interludes, not least of which are the well-drawn characters, the fact that it's set almost 100 years ago, and the lush aesthetics – those dresses! The stirring chords in the opening scene! Even the mansion’s lamps have their own Tumblr!

"Downton" is a pastiche of so many of its predecessors, almost self-parodically so (see: Maggie Smith), with no allegiance to source material or historical accuracy and nothing to prevent the latter-day wink and nod. But the costume-drama genre, whose fans delight in "Downton’s" sexier revival of the form, can have all of the same aesthetic and temporal distractions and still have a sharper take. “Personally, I prefer a nice, meaty Dickens or Trollope adaptation,” "Downton" fan and AlterNet editor Sarah Seltzer told me, “with lots of broad and sentimental damning of the idle rich.”

And yet. Though two different people I talked to about "Downton Abbey" compared it to "Gossip Girl," that show is lopsidedly upstairs. "Downton" spends at least as much time on the servants as the titled folks, which in itself is progressive, argued Bryce Covert, editor of the Roosevelt Institute’s New Deal 2.0 blog. “In Downton, the rigid class structure is clearly oppressive for everyone involved. It's not just the servants who suffer from it, but Lady Mary, Matthew and everyone caught up in the entail,” the law mandating that a woman cannot inherit a title or estate.

The female characters are complex, well-developed and have range (with the possible exception of sour-faced lady's maid O'Brien, whose two modes seem to be spiteful plotting and mild regret). The beautiful and high-spirited Lady Sybil, who in the first seasons steals off to attend suffragette rallies, seems designed for the enthusiastic identification of the ladyblogging set (guilty), but it’s the complexity and development of the eldest daughter, Lady Mary, superbly played by Michelle Dockery, that represents the best that the show is capable of. "Lady Mary is one of the most compelling antiheroines I've come across either in books or on-screen for a while. She is selfish, slightly delusional, and often cruel, but capable of kindness and empathy as well as moments of insight," says Miriam Markowitz, associate literary editor at the Nation. Plus, "her motto, 'Forget everything I say, I know I do,' is one I think many of us might find useful in the age of Twitter.”

Fellowes also has no problem with deploying anachronism, particularly in the second season (which aired in the U.K. in the fall and has long been available on BitTorrent to impatient downloaders), to tap us on the nose and have the characters pronounce the limits of being female or working class. The coming season and the Christmas special that followed it are all about the war and the inevitable transformations of the characters and their social order. Without giving away too much, some of these upheavals are plausible, and some of them paint the world that looks more like the one many of us would like to see, rather than the world that largely was.

This amounts to having it both ways. The real-life earl who lives in the castle where it’s filmed has said that the Earl of Grantham character “chimes with my view of long-term stewardship” and that the show “has touched a nerve … of order and structure.” It’s that character, played by Hugh Bonneville, rather than Sybil or Mary, who seems to bear the bulk of Fellowes’ fantasies. (Fellowes also thinks "the bad earl is such a cliché.") But so much depends on his goodwill and his family’s interest in the servants’ lives.

“I actually think it's a lot like 'The West Wing,'” Steve Jacobs, a political communications strategist and a fan of the show, told me. “Lord Grantham is the platonic ideal of an English aristocrat, just like Jed Bartlet was the platonic ideal of an American president. The very fact that Grantham and Bartlet are so good and selfless is, to me, an indication that they're not meant to be completely accurate depictions of their real-life counterparts.” Even if a democratically -elected president differs in earned legitimacy from an earl, both involve a Great Man shaping history. As Max Read, a writer at Gawker, says of the analogy, “Both shows suffer from operating under ideas of politics/history that focus on the individual actor rather than the system. So the nobility and selflessness of Bartlet and the earl justify the systems in which they work … It's a very classically conservative notion of history.”

Or, as Seltzer puts it, the “personal consideration and attention” displayed by the nobility in the show “pretty much omits the kind of privileged carelessness that even the most enlightened who have power in society occasionally show towards those who are paid to help them.” The world may be changing, as the characters repeatedly acknowledge (especially in the heavier-handed second season), but Fellowes clearly hopes it won’t change that much.