Mitt Romney and the power of playing dumb 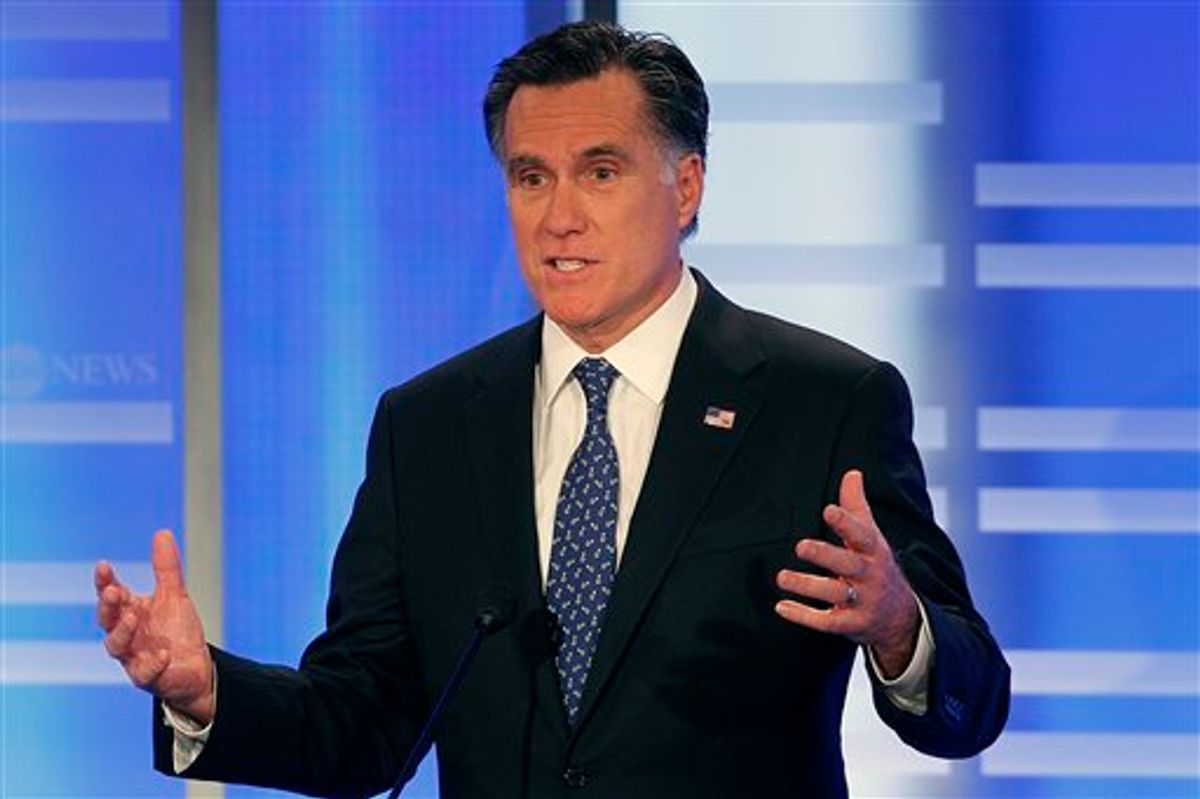 Mitt Romney has gotten to be pretty good at playing dumb, and he showed it Sunday morning.

The setting was the fifteenth Republican presidential debate, the final such event before Tuesday's Republican presidential primary.  One of the most baffling features of the previous debates -- including the one held just ten hours before Sunday morning's -- had been the reluctance of Romney's opponents to confront him on his many vulnerabilities (or for those who did try, their comical inability to pull it off). But in this one, he took some real heat, mainly from Newt Gingrich but also from his other foes and from an uncomfortable question or two. And he seemed to walk away unscathed.

Take his most heated back-and-forth with Gingrich, over the negative ad blitz that a Romney-aligned Super PAC has used against the former Speaker to devastating effect. Officially, Romney has no connection to the group and can't legally coordinate with it -- facts he's been happy to point out when he's been asked to address its ads. But everyone in the political world understands what's going on, including Gingrich, who has all but admitted that he's staying in the race to seek revenge against Romney for the ads. Prompted by moderator David Gregory to defend his characterization of Romney as a liar, Gingrich stood his ground and issued a challenge to Romney.

"I wish you would calmly and directly state it is your former staffer running the PAC, that it is your millionaire friends giving to the PAC, and that you know some of the ads aren’t true," he declared. "Just say that."

Romney's response was slipperiness at its most effective. "Of course" one of his former staffers is involved with the PAC and its ads, he said, but "I haven’t seen them and as you know under the law, I can’t direct their ads. If there’s anything that’s wrong, I hope they take it out." Then he allowed that he had, in fact, seen one of the PAC's ads, and that he thought most of what it said about Gingrich had been true. Thus did Romney spend the next 30 seconds or so reminding viewers that Gingrich had been forced out as House Speaker, hit with a record ethics fine, and that he'd branded Paul Ryan's Medicare plan "right-wing social engineering." He closed by chiding Gingrich for his tone: "I wouldn't call someone the things you've called me."

It's hard to see how Romney didn't get the better of this exchange. Gingrich was complaining about ads and process, while Romney managed to invoke three specific, unappealing aspects of Gingrich's political biography. Romney will probably take some heat for seeming to flip-flip mid-answer -- first claiming never to have seen the ads, then recounting one from memory. But by the end of the exchange, Gingrich was preemptively defending a 27-minute anti-Romney video that a Gingrich-aligned Super PAC is now putting together, even noting which news sources would be used for it. To the extent it's an issue at all to Republican primary voters, the Super PAC question is probably a very muddled one.

The other key moment came on a question about gay rights, with one of the media panelists reminding Romney of his first campaign for office in 1994, when he said he'd do more to advance the issue than Ted Kennedy and that he'd be a moderating voice in the national GOP. What, Romney was asked, have you done since then to stand up for gay people?

The correct answer, of course, is essentially nothing -- at least since gay marriage was legalized in Massachusetts and Romney turned his attention to the national GOP stage. Since then, he's labored to distance himself from his home state's progressive attitudes, selling himself as a champion of "traditional marriage" even reversing his previous support for civil unions as a substitute for same-sex marriages. But given how close he is to winning the GOP nomination, Romney is now at risk of being positioned too far to the right on gay issues. Public attitudes on the subject are rapidly changing, producing some embarrassing moments for anti-gay Republican candidates.

So again, Romney played dumb, pretending that his tone has been consistent since 1994 and pointing to his willingness as governor to appoint gay people to various positions. Asked a follow-up question about when he last used his voice to call for for increased rights for gays, Romney replied: "Right now." This had the benefit of looking and sounding good to any general election voters watching (especially when the audience reacted with applause) while being an essentially empty statement, since Romney actually favors fewer rights for gays now than he did earlier in his political career. But somehow, he managed to avoid saying anything that would offend the GOP base while also not handing Democrats any new material for the fall.

During the debate, a new poll came out that showed Romney still comfortably ahead in New Hampshire, with 35 percent. Ron Paul was next at 20 and everyone else was far behind. In other words, Romney is well-positioned to win comfortably on Tuesday, then move on to South Carolina (where the latest numbers are very encouraging) with a chance to put the race away. If he ends up rolling to the nomination this easily, it will be for many reasons, including luck. But Sunday's debate was a reminder not to underestimate the benefits Romney has reaped from his remarkable ability to play dumb.