So what if America is the most religious nation?

if you compare creed and deed, the claim is hollow 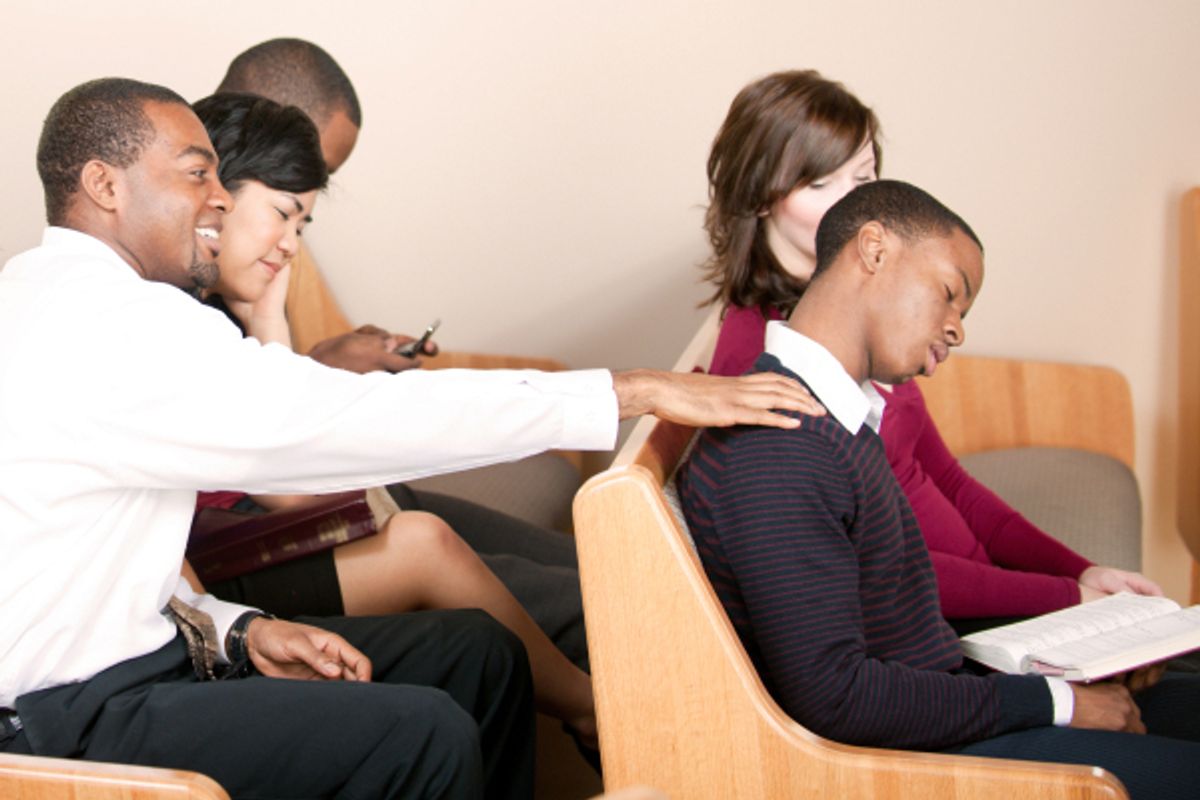 Polls consistently tell us that America is the most religious nation in the industrialized world. More that 90 percent of our population say they believe in God, and that they pray regularly. The figure may even be higher when adding the majority of Americans who claim to be atheists but pray, one-third of them often, according to a Baylor University survey.

A Rice University study of 275 scientists at 21 "elite" research universities in the United States found that while 61 percent declared themselves atheists or agnostics, 17 percent have attended church services. Whether genuine devotees, just hedging their bets or doing it for the children (as some say), there's little doubt that America is a religious nation.

But does professing religious beliefs translate into acting in accord with religious principles? Isn't behavior the true test? In his New Testament epistle, James expressed the Christian view that "faith without works is dead." Similarly, Judaism calls for "mitzvahs" -- good deeds. And Islam requires acts of charity. Poet Ralph Waldo Emerson offered this challenging formula for sincerity: "Go put your creed into your deed."

How do creed and deed match up? The 2011 report card for religious America.

More people are slipping into poverty in the United States. The Associated Press recently reported that the U.S. poverty rate rose to a new record of 49.9 million -- 16 percent of the U.S. population -- based on a more comprehensive Census Bureau measure of poverty. That's a leap over the 46.2 million previously reported, which was called the highest number in the 52 years the bureau has been publishing figures on poverty.

The number of working poor continues to increase. Today, nearly 1 out of every 3 families in the United States is considered to be "low income" According to the just released 2010-2011 policy brief of the "Working Poor Families Project" the number of working poor in the United States is higher than ever before seen and "continues to increase at a staggering pace."

In 2009 hunger in the U.S. reached a 14-year high and now, according to Feed America, it's still increasing at an alarming rate. One in 4 children in the U.S. is living without consistent access to enough nutritious food to live a healthy life. And Americans who use food stamps hit an all time high this past year. Fifteen percent of our population -- over 40 million people -- now rely on food stamps.

The newly revised more realistic formula for calculating the number of elderly poor is expected to show that the true number is 1 in 5 -- more than double the previous estimate. Also with the new formula, overall poverty is expected to increase from 13.2 percent, or 39.8 million people, to 15.8 percent, or 47.4 million, attributable to rising expenses for medical care and several other cost factors. The elderly poor and other seniors on fixed incomes are often forced to choose between food and medicine.

It's estimated that each year Americans throw away 40 percent of their food. American restaurants toss out more than 6,000 tons of food every day, and grocery stores discard an estimated 30 million pounds of food daily. The Department of Agriculture's Food Loss Project estimates that Americans throw out 25.9 million tons of food each year. More disturbing: A University of Arizona study reports that 40 to 50 percent of all food ready for harvest never gets eaten.

The United States' world ranking in life expectancy has fallen from 16th in 1960 to 29th in 2010. A Columbia University study attributes our decline from 11th place in 1950 to the much lower present ranking to our inadequate healthcare system.

"Income inequality in this country is just getting worse and worse and worse," according to a report on Bloomberg News: "Since 1980," the report continues, "about 5 percent of annual national income has shifted from the middle class to the nation's richest households. That means the wealthiest 5,934 households last year enjoyed an additional $650 billion -- about $109 million apiece -- beyond what they would have had if the economic pie had been divided as it was in 1980, according to Census Bureau data."

In the same Bloomberg News report, Howard Buffett, the Berkshire Hathaway Inc. director and son of Chairman Warren Buffett, in speaking sympathetically about the Occupy Wall Street protesters said, "There has never been a larger gap between earnings in this country," And what is our religious nation's response? Buffet continues: "There has never been a time in my lifetime when the government is going to cut an incredible amount of programs that support poor people and feed them."

The wealthiest segment of the population continues to fight ferociously for lower tax rates, tax breaks and, most of all, no increases in taxes on the rich -- while joblessness, poverty, homelessness and hunger are rampant in America.

Last month President Obama introduced a rule that would extend the federal minimum wage and overtime protections to workers who provide home-based care to the elderly and disabled. Republican legislators and business interests are fighting the rule change, despite the fact that the minimum wage still keeps families hovering at the poverty line. And some favor lowering the minimum wage -- to as little as $3 per hour.

Millions of Americans lost their homes in the subprime real estate debacle starting in 2007. Now, a sharp surge in home foreclosures is forecast for 2012 that will bring misery to countless more American families. Meanwhile, banks sit on billions from the public coffers given to them in the great $700 billion bailout -- but no one knows for sure where that money is or how it was used. Bank executives have been rewarded for their incompetence with big bonuses, much of which observers suspect were supplied from bailout funds. Adding further insult, banks take no responsibility for their greedy, irresponsible and reckless practices that crashed the economy.

The United States continues to stand out as the only industrialized nation that doesn't provide healthcare for all its citizens. Efforts to introduce universal healthcare are consistently slammed by conservative Republicans. In September 2011, a New York Times editorial reported the "Bleak News on Health Insurance." Between 2009 and 2010, the uninsured increased by nearly 1 million. Census bureau figures reported that the number of uninsured rose to 49.9 million from 49 million while those with private health insurance continued to decline. More devastating, employment based policies dropped a staggering 55 percent.

Although the number of uninsured children has declined between 2008 and 2010 due to states expanding access to the Children's Medicaid Program, the figures, are nothing to boast about. Close to 6 million children remain uninsured.

Religions preach the sanctity of marriage. And the theme of family values abounds in religious sermons. Yet according to the Christian Post, divorce rates in the southern "Bible belt" are the highest in the country. The TV show "Desperate Housewives," which champions infidelity, has a loyal following in the Bible belt, according to the Chicago Tribune.

Some religions insist on the sexual abstinence before marriage. Isn't it ironic that the journal Reproductive Health reports a correlation showing that the more religious the state, the higher the rates of teenage pregnancy?

In one area, the United States is indisputably No. 1. The U.S. has the largest prison population in the world. Currently more than 2 million people are incarcerated; and according to the most recent figures, 1 in every 31 adults is in prison, on parole or probation, adding up to a total of 7.3 million at a cost of $68 billion annually. Criminologist Shawn Bushway at the State University at Albany reports that "by age 23, almost a third of Americans have been arrested for a crime." Our nearest competitor for the No. 1 spot is China. Although China has a far greater total population than the U.S., its prison population is half a million less than ours. Next is Russia with 846,967 imprisoned.

The U.S. military budget for 2012 amounts to $662 billion. That's greater than the next nine countries combined and accounts for 43 percent of the total world military expenditure, according to the Stockholm International Peace Research Institute. China, the next largest military spender, is a distant second accounting for 7.3 percent followed by the U.K.'s 3.7 and then a tie between France and Russia at 3.6 percent.

Scientists warn that the environmental doomsday clock is ticking. The icebergs are breaking away and melting before our eyes, revealing islands we never saw before. And in 2010, global carbon dioxide emissions that contribute to climate change "jumped by the largest amount on record," sounding an alarm that we may be approaching a point of no return. We watch and debate but do too little to preserve the environment for ourselves and future generations. In our hubris we forget that we are guests on a tiny rock floating -- in an infinite universe of rocks  -- that uniquely supports life in a delicate balance of natural and mysterious forces. We have the choice and the responsibility to act. Or, as one theologian cautioned: "God will not save us."

What is religion?: Love, caring, serving, giving, sharing, oneness, brother and sisterhood, compassion and selflessness. Summed up: "Thy neighbor is thyself."

I'm so glad that we are a religious nation.

Bernard Starr is a psychologist and journalist. He is co-author of "The Starr –Weiner Report on Sex and Sexuality in the Mature Years" (McGraw Hill) and "Stalemates: The Truth About Extramarital Affairs" (New Horizon Press)