At a Gingrich event in New Hampshire, they come to praise the former speaker -- and maybe to bury him 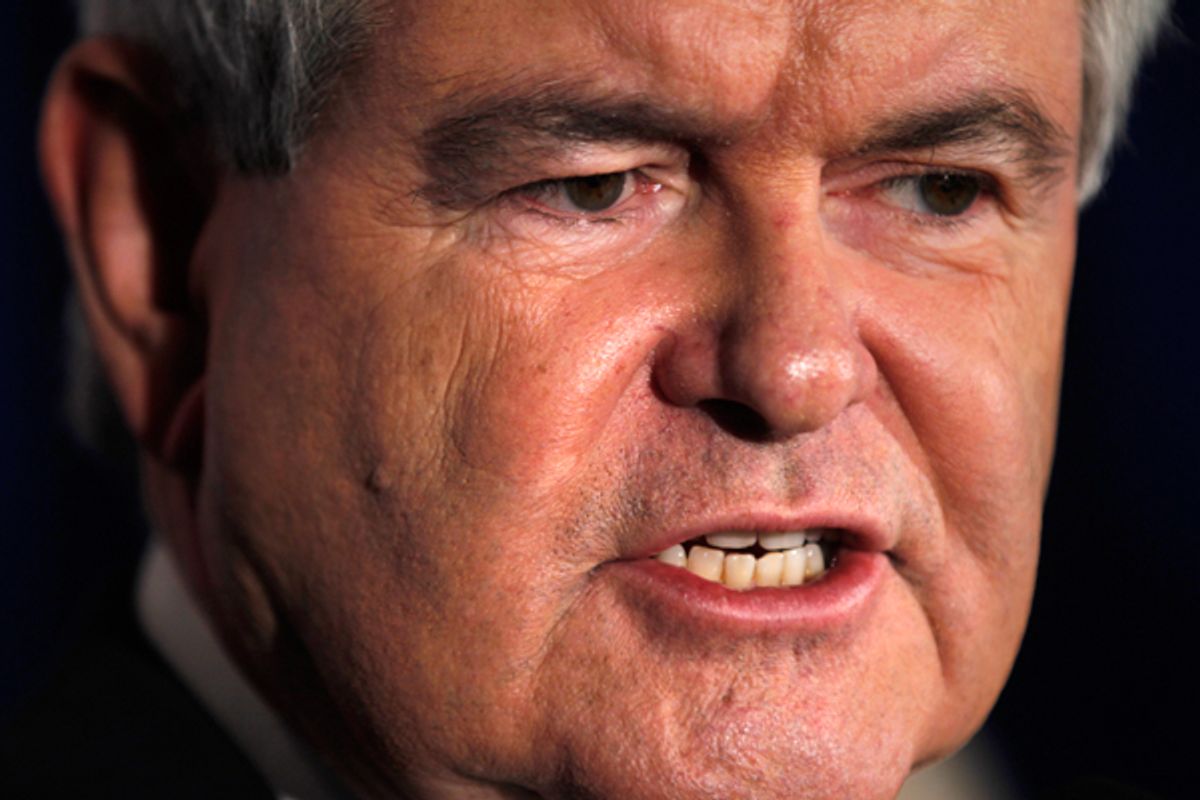 DERRY, N.H. -- The crowd of 350 or so cheered when one speaker said he'd be the next president and many sported stickers proclaiming his name, so it seemed safe at first to say the event Newt Gingrich held in a high school gym in this southern New Hampshire town Sunday night was as much a campaign rally as the town hall meeting it was billed as.

When the floor was opened to questions, one woman gushed that she could listen to him talk all night, while a student told the former House speaker that she badly wanted him to be able to debate President Obama in the fall. But when a man wearing a red sweat shirt adorned with a Newt sticker rose and addressed Gingrich, it suggested a new possibility: This wasn't a rally or a town hall -- it was a living wake, where they came to give their candidate a proper send-off before his journey to the political hereafter.

"In the last three weeks, your critics have attacked you viciously, and it's really hurt you in the polls," the man, who later identified himself to Salon as Gerard Thomas of Derry, told Gingrich. Thomas stressed that he didn't think the attacks, which helped drop Gingrich from first place in the polls to a fourth place finish in Iowa last week, were fair, but that he feared Gingrich had been exposed as an easy mark for Barack Obama and his allies, who are "waiting in the woods to tear you apart."

Gingrich noted that 45 percent of the television ads that had been running in Iowa were negative attacks on him (most courtesy of a Mitt Romney-aligned Super PAC) and called the experience "good practice." And he insisted that his refusal for most of December to engage the attacks and hit back was rooted in a broader strategic calculation -- that he'd never expected to be the front-runner at that point (March had been his target date, supposedly) and that while he was ramping up his operations, he didn't want to be "consistently using up all of my money telling you what's wrong with [the pro-Romney] ads." Toward the end in Iowa, he added, "we were actually coming back."

In terms of a race against Obama, Gingrich insisted that a clear contrast between "a Reagan conservative named Gingrich and a Saul Alinsky radical named Obama" would ultimately overpower anything Democrats could throw at him.

"I do actually believe in the core intellect of the American people," he said.

When he finished, the crowd applauded and Thomas flashed him a thumbs-up. But later, Thomas told Salon that while he plans to vote for Gingrich, he still thinks he's probably not going anywhere.

"I don't think a lot of us are as smart as he thinks we are," Thomas said.

Pitching the value of the sharpest possible ideological contrast with Obama is, of course, Gingrich's attempt to convince Republicans that nominating Romney, "a Massachusetts moderate," would be risky -- and that picking Gingrich would be the best way to ensure a GOP landslide. As he did on Sunday night, he backs this up with frequent mentions of Ronald Reagan's 1980 campaign, taking some license with history to portray Reagan as uniquely capable of crushing Jimmy Carter because of his debate skills and right-wing ideology. (Reality: Just about any Republican would have destroyed Carter in '80.) To defeat Obama, Gingrich told the crowd in Derry, you need "a big gap in the middle, so that his billion dollars in advertising falls in the middle."

The problem for Gingrich is that he's racked up more than his share of conservative apostasies over the years, many of which were highlighted in the attacks that brought him down in Iowa. So Republicans aren't necessarily willing to accept at face value his claim that a vast ideological gap exists between him and Romney. And they can surely read polls too, which generally show Romney doing better (or at least as well) as any other Republican against Obama.

Richard Gostanian, a Salem resident who attended the Derry event, provided a vivid demonstration of the challenge Gingrich faces. When he rose to ask a question, he first hailed Gingrich as perhaps "the most brilliant man" in politics today. But then he added: "On occasion, you have disappointed me," specifically criticizing Gingrich for his past statements on "this business of man-made global warming."

Gingrich, who in 2007 cut an ad with Nancy Pelosi in which he said that "we do agree that our country must take action to address climate change," gave what is by now his stock response, saying that "we don't know" whether man plays a role in climate change, then attacking cap-and-trade and Al Gore.

"He didn't really talk about the fact that he sat on that couch with Nancy Pelosi," Gostanian told Salon afterward. "I think he wants to walk away from that."

Gostanian stressed that he considers himself a Gingrich fan but said he doesn't see how he'll come close to winning New Hampshire -- "maybe in South Carolina or Florida. We'll see." And he said he'd have no reservations about supporting Romney: "Anybody but O-Bambi."

Another attendee, who lined up to meet Gingrich afterward but didn't want to identify herself to Salon, said she's read most of Gingrich's books and will probably vote for him in the primary "to make a point" -- not because she thinks he'll win the nomination.

And almost as soon as the event ended, an interview appeared online in which Gingrich's top New Hampshire backer, Union Leader publisher Joe McQuaid, floated the possibility of him quitting the race. “At some point," McQuaid told the right-wing site Newsmax, "the other conservatives -- Perry, Gingrich, Santorum -- are going to have to say, ‘Let’s sit down and draw straws.' That’s the only way you’re going to stop Romney."

The latest New Hampshire average from RealClearPolitics has Gingrich at 8.6 percent, more than 30 points behind Romney and bunched together with Rick Santorum and Jon Huntsman (with Ron Paul around 20 percent). Short of a miracle, he's headed for his second poor showing in as many GOP contests, making a South Carolina reboot that much more difficult. Then again, there was also word Sunday night that a pro-Gingrich Super PAC has received a $5 million infusion from an elite GOP donor and Gingrich ally, and that the money will be used to blanket the South Carolina airwaves with a series of scathing anti-Romney ads. At the very least, Gingrich seems intent on sticking around to inflict as much damage as possible on Romney.

But those early December days when Gingrich was soaring in the polls and brashly calling himself the likely nominee feel like ancient history now -- and at least a few of the fans who came out Sunday night seemed to believe they're not coming back.