Romney defends his "fire people" gaffe with a lie

He claims he was talking about "Obamacare" preventing people from "firing" their insurance company. It doesn't wash 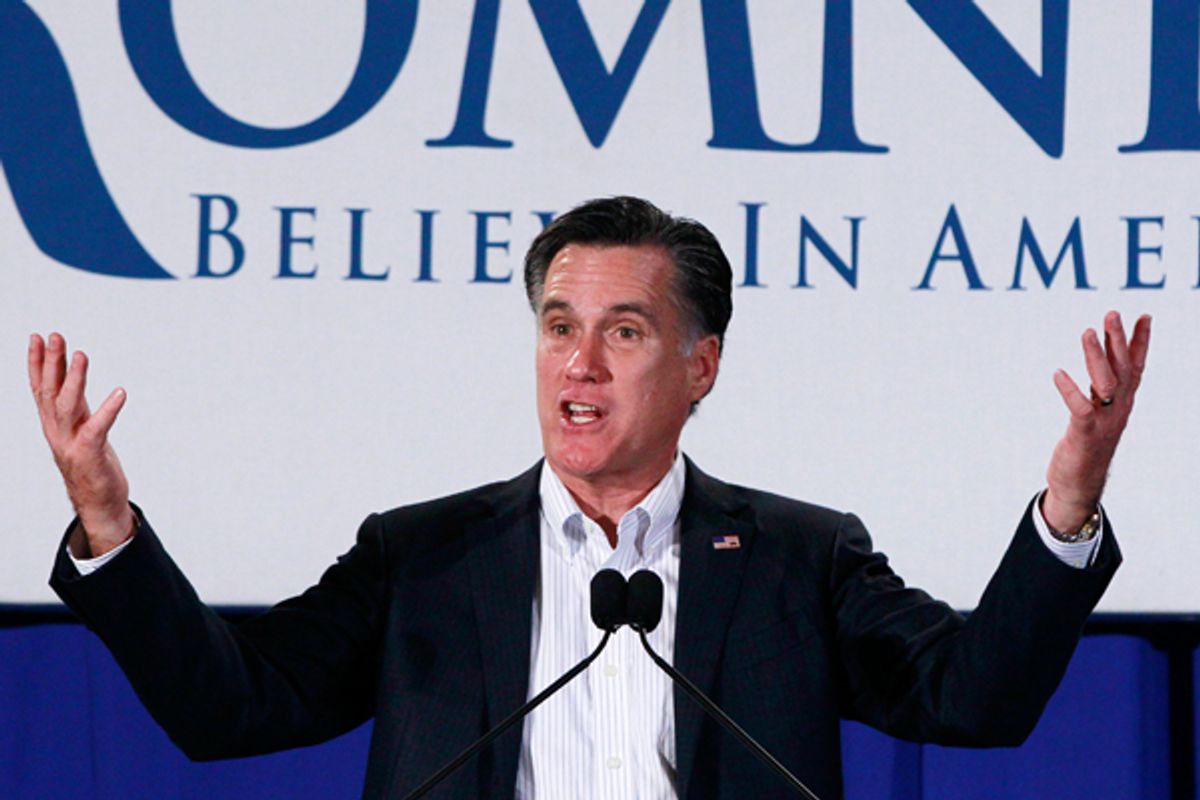 I appreciate the diligence of reporters and pundits who have pointed out that when Mitt Romney said "I like being able to fire people," he wasn't talking, literally, about firing people. Yes, Bain Capital often made its money firing people, but Romney was actually talking about the right to ditch an insurance provider that isn't providing good service when he made his unfortunate remark. So his GOP rivals who are piling on – Rick Perry set up a ringtone that features Romney saying "I like being able to fire people" over and over – aren't being entirely fair.

On the other hand, Romney's not being at all fair in the way he's defended himself. He told reporters he was only talking about defending consumers from the supposed tyranny of the Affordable Care Act – and he lied about what it does.

“I don’t want to live in a world where we have Obamacare telling us which insurance we have to have, which doctor we can have, which hospital we go to," Romney said at a press conference Monday. "I believe in the setting as I described this morning where people are able to choose their own doctor, choose their own insurance company. If they don’t like their insurance company or their provider, they can get rid of it."

Those of us who supported a more progressive healthcare reform bill, including a public option, know that the compromise brokered by the White House protected the private insurance system. Nothing in the law tells people which insurance they have to have or which doctor they can go to. As a matter of fact, insurance companies themselves restrict which doctors we go to – they also have death panels – but that's another story.

So in the course of allowing Romney to correct the record, most news organizations are allowing him to propagate a lie about the president. I know things are moving quickly, on the eve of the New Hampshire primary, but I thought I'd take the time to point that out.

It's also a form of karma that Romney's being skewered over words being taken out of context, when he did the same thing to Obama in November. Remember the ad showing the president saying, "If we keep talking about the economy, we're going to lose," and implying it was a recent clip, about the current election cycle – instead of a 2008 clip quoting a John McCain advisor. Romney's folks spun the ad by saying it was the kind of thing the president could have said recently, given the sputtering economy.

Well, "I like being able to fire people" is exactly the kind of thing Mitt Romney could have said during his career at Bain Capital. Payback is a bitch. It probably won't hurt him in New Hampshire, but Romney can expect those words to haunt him throughout the race.