The dumbest third-grade assignment ever?

For an Atlanta elementary school, slavery references plus word problems equals a heap of trouble 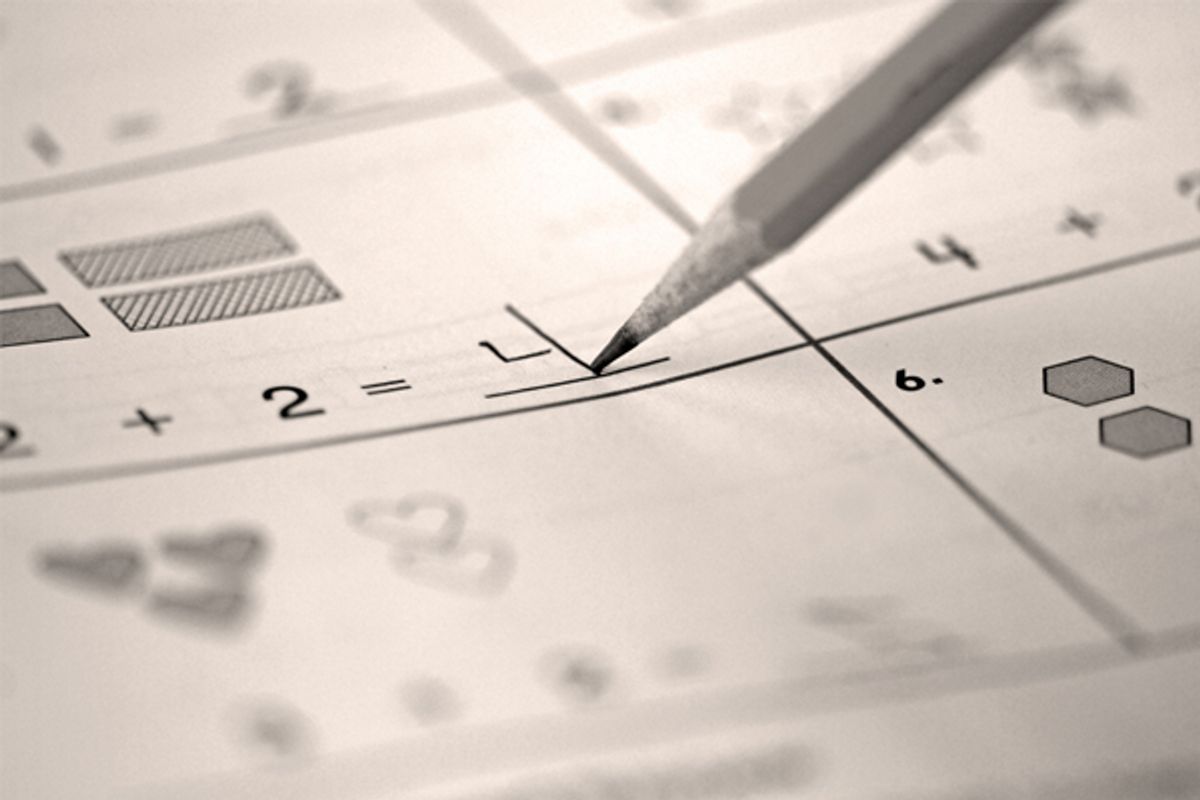 Let's see if you're smarter than a Gwinnett County third-grade math teacher. If, in the year 2012, an Atlanta-area elementary school asks its students to solve arithmetic problems about how much fruit a slave can pick -- and how many beatings he might get in a week -- exactly how many rounds of ammunition has that school just fired into its own feet?

In the most misguided attempt at social understanding since Kirk Lazarus donned blackface, Beaver Ridge Elementary School decided earlier this term to shoehorn a little of the antebellum into its math worksheets. "Each tree had 56 oranges. If eight slaves pick them equally, then how much would each slave pick?" asks one. Another posits, "If Frederick got two beatings per day, how many beatings did he get in one week?" Let's see ... Divide by eight, multiply by seven … got it. The answer is, "Oh my God are you people crazy?"

In a surprise to exactly no one, save the school's faculty, parents were displeased to discover their children -- the majority of whom are minorities – were being grilled on the subjects of slave labor and ass whippings. Apparently at Beaver Ridge, there are four R's – reading, writing, arithmetic and racism. As one stunned father told local station WSB-TV, "It blew me away."

In a hasty damage control effort, school official Sloan Roach explained that the questions were part of a "cross-curricular activity" designed to incorporate math and social studies. Another question, for example, touched upon the fine Susan B. Anthony received for attempting to vote. But without context, the word problems make abuse seem as normal as a question about how many pencils are in a box.

The school says it will now more carefully review assignments before handing them out, and the vice principal assures that the worksheets have now been shredded. And in a breathtaking understatement, Sloan admitted to the Atlanta Journal-Constitution Saturday that "Clearly, they did not do as good of a job as they should have done. It was just a poorly written question." Time to compare and contrast, students! "Where's the party at?" -- that's a poorly worded question. "How many beatings would the slave get?" is a fiasco.

The AJC reports that "62 percent of the school's students are Hispanic or Latino, 24 percent are black or African-American and 5 percent are white." But Beaver Ridge's ethnic makeup is almost irrelevant. The questions would simply be a different kind of horribly wrong were the student body predominantly white.

Were the school's teachers -- who have conspicuously not been identified -- being deliberately provocative by setting their questions within a difficult chapter of American history? Likely they were just being stunningly insensitive. As one poster on the AJC website noted, they sure didn't ask any questions like, "If 20 slaves escaped each day of the month, how many slaves would be free by the end of the month?"

Using social studies as a springboard for math is actually a great idea. And making classroom lessons dynamic with real-world context is a time-tested device to teach children the ways numbers are applied in life. Let's hope this failure doesn't stop smart and more sensitive teachers from coming up with creative approaches that, you know, don't involve beatings. Sadly, too, the whole screw-up reinforces the stereotype of what a poster at the New York Daily News referred to as "the New South [that] still has people who loved the Old South."

Of course, our kids need to be taught history, especially its most painful aspects. But it doesn't take a whiz to figure out that the debacle in Georgia would earn a big fat zero from the start. The best it can become now is a teachable moment – for school administrators.