Senior campaign advisor Broderick Johnson was paid over $1 million to lobby for Wall St. over the past five years 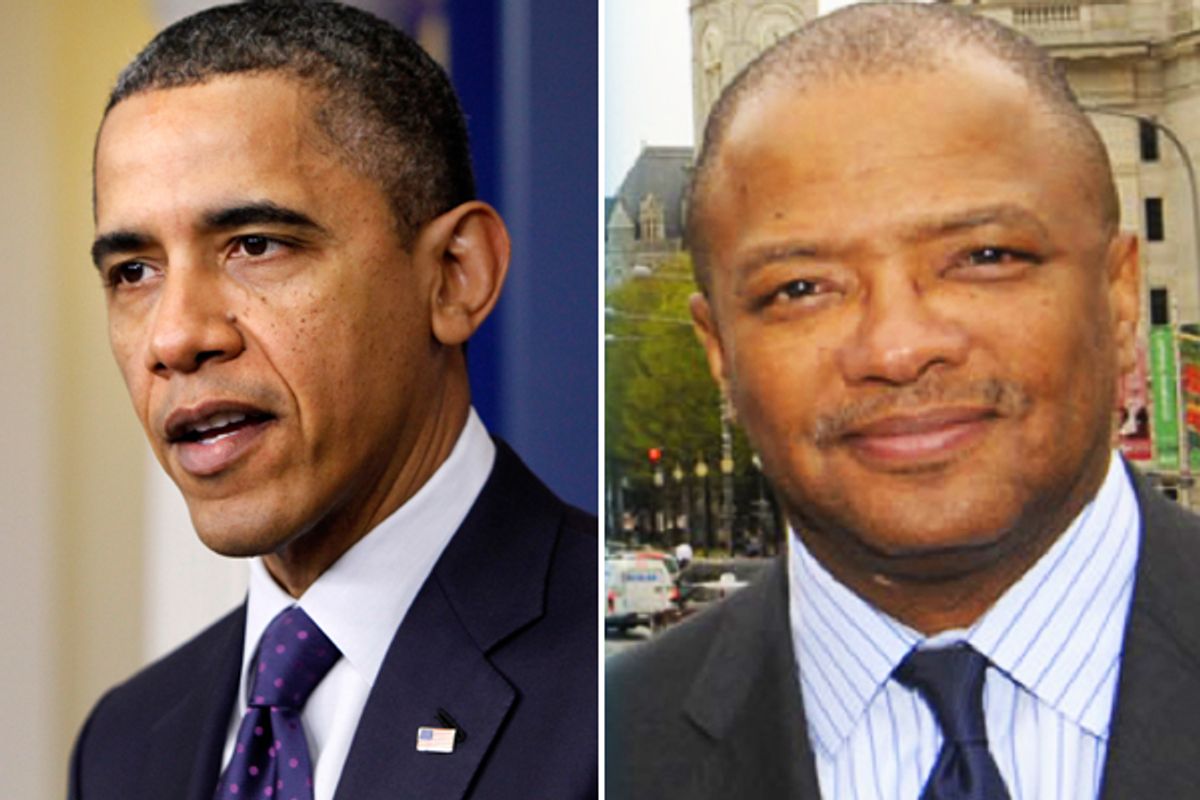 The Obama campaign is keeping mum on the role senior advisor Broderick Johnson played in lobbying for the 2008 Wall Street bailout when he worked as a hired gun for the country's largest financial services companies.

Johnson’s past work as a lobbyist was noted in the press when he was appointed a top Obama surrogate in late October, but not the details of his extensive and lucrative work for the financial services industry. Johnson’s hiring despite his recent work for Wall Street strikes a dissonant note in view of the Obama camp’s reported strategy of "channeling anti-Wall Street anger" as a way to take on the Republicans.

Records show that in 2008, as an employee at Washington law firm Bryan Cave, Johnson lobbied for the $700 billion TARP bailout on behalf of the Financial Services Forum, which is composed of the CEOs of the 20 biggest financial institutions doing business in the United States. Forum members include big names like Goldman Sachs, UBS, AIG, Bank of America and Deutsche Bank.

From 2007 through the first quarter of 2011, Johnson and a handful of other Bryan Cave lobbyists were paid $450,000 by the Financial Services Forum, records show. Johnson and a small number of colleagues brought in a total of $1.3 million to Bryan Cave from the financial services industry over the past five years. That includes work he did for Fannie Mae, Bank of America, J.P. Morgan Chase, the Electronic Payments Coalition and the investment firm J.C. Flowers.

Asked for details about Johnson’s work on the bailout, an Obama campaign spokesperson responded only that "Broderick is no longer a lobbyist — he deregistered in April — and he will not discuss any matters related to his clients with the campaign or administration."

Because of the campaign’s reticence, we don’t know many of the details of Johnson’s work for the Financial Services Forum beyond the fact that at the height of the fall 2008 crisis, he lobbied on the Emergency Economic Stabilization Act, which created the $700 billion TARP program. After the House narrowly defeated the first version of the bill in late September 2008, Financial Services Forum executive Rob Nichols sounded the alarm.

“Just as the cardiovascular system is the essential, life-sustaining system of the body, the financial system is the essential basis upon which the growth and vitality of all other sectors of the economy depend,” Nichols said. "We believe this legislation is critically important and should be enacted into law at the earliest possible time in order restore market stability and increase credit availability for Americans.”

Resentment over the bailouts lingers across the political spectrum, from the Tea Party to the Occupy movement. Supporters of the program point to the fact that much of the money has been paid back with interest; critics argue that it failed Main Street and that, in the words of Elizabeth Warren, the money given to banks had “no strings attached, no accountability, no transparency.” The Obama campaign declined to comment when asked whether the hiring of a former bailout lobbyist undercuts Obama’s critical message on Wall Street.

Johnson is known as an extremely well-connected Democratic operative. The husband of NPR’s Michele Norris, he has been through the revolving door a few times, working variously as a Capitol Hill staffer, lobbyist and Clinton administration official. Mary Beth Cahill, campaign manager for John Kerry’s 2004 presidential bid, told the Hill in 2008 that in his work for that campaign Johnson possessed a “smooth and adept way of managing crises” and “knew everybody.”

In February 2009, just as the new administration was getting underway and with Johnson fresh off his stint as an informal advisor to the Obama campaign, he touted his connections with the White House in an interview with Roll Call. "We are seeing growth across the board," he said. "Health care, energy and financial services are key issues in 2009 where we have both expertise and strong relationships on the Hill and in the new administration."

Johnson has lobbied for a lengthy roster of large corporate clients. His work for TransCanada, the company that wants to build the controversial Keystone XL pipeline, has already been explored in the media. In the past five years, he has also worked for Shell; Verizon; Anheuser Busch; Microsoft; Comcast; the Biotechnology Industry Organization; the trade group for the cable TV industry; private prison giant the GEO Group; and the Talx Corp., which specializes in helping employers fight unemployment claims and which has been criticized for shoddy and unfair practices.