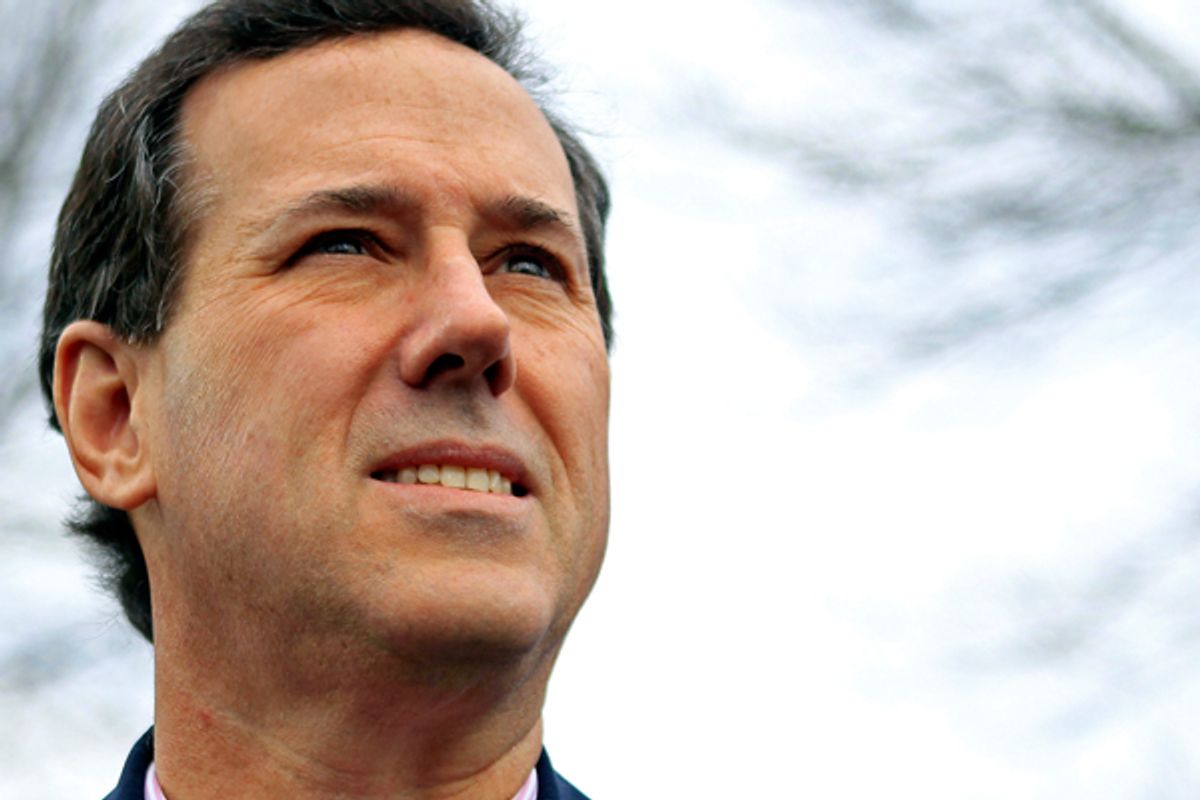 SALEM, N.H. -- Rick Santorum told the crowd at the Salem-Derry Elks Lodge that their 90 minutes were about up and that he'd take one more question before leaving. More than a dozen hands shot up, so Santorum tasked his wife with picking the final inquisitor.

She chose poorly. What would you do, the female student asked Santorum, if you found out that your child was gay?

"I got that question the other night at the debate," Santorum replied. "And it's funny -- I think I get that question more than most candidates. I haven't heard anybody getting that. I'll answer the question the same way I answered the other night at the debate, which is: My job as a parent is to love my child unconditionally, and I would love my child unconditionally."

Of course, it's no mystery why Santorum's views on gay rights get so much attention; there's an entire Wikipedia entry with the title, "Santorum controversy regarding homosexuality." But in New Hampshire this past week, one of the more interesting developments has been the degree to which young audience members have confronted him on the subject. Several college students in Concord last Friday pressed Santorum to justify his opposition to same-sex marriage, prompting a testy exchange in which the former senator repeatedly likened it to polygamy and that ended with loud jeers from some in the crowd. Gay marriage was also the crowd's favorite topic at a Santorum event at a private high school, while a man in Keene demanded to know why Santorum is against allowing gays to openly serve in the military.

At the Elks lodge, where about 100 people gathered (most of them seemingly not lodge members), Santorum took a total of six questions. Two were from young people, and each was about gay rights. The first, from a high school student named Christine Taft, was framed in terms of electability. "I know you have strong views on gay rights," Taft said before asking if "some of those views might exclude some of the independents" Santorum would need to beat Barack Obama.

Santorum professed surprise at the question, noting that his fellow Republican candidates -- and even Barack Obama -- are all on the record opposing gay marriage. He went on to talk about studies that have shown people who are married tend to be happier and more secure and to argue that expanding the definition of marriage would make it "simply one of a variety of different lifestyles, all of which are similar to each other."

There was applause, but Taft said later that she wasn't exactly won over.

"I don't agree with his very strong opinions about gay rights," she told Salon. "I think people should be allowed to do what they want to do. I liked his answer at the end, that if one of his kids was to come out of the closet that he would support them unconditionally. That I really appreciated. But I think that with a lot of young voters, gay rights is a big issue to them."

Asked why this is, Taft noted  that "my school is very open about it. We have, like, a gay-straight alliance club. And I know that when my parents were in high school, there weren't as many people that they knew going through it -- having to deal with it. So it could be that." And she pointed to a broader cultural evolution.

"I'm not very religious. I believe in God, but I go to church maybe four or five times a year," she said. "And so, I think the church values that were such a big part of the older generations aren't as big a part of our beliefs nowadays. We want to be able to do what we want to do. We don't like when people tell us, 'You can't do that. You can't do that.' So I think it's just that we want our freedom."