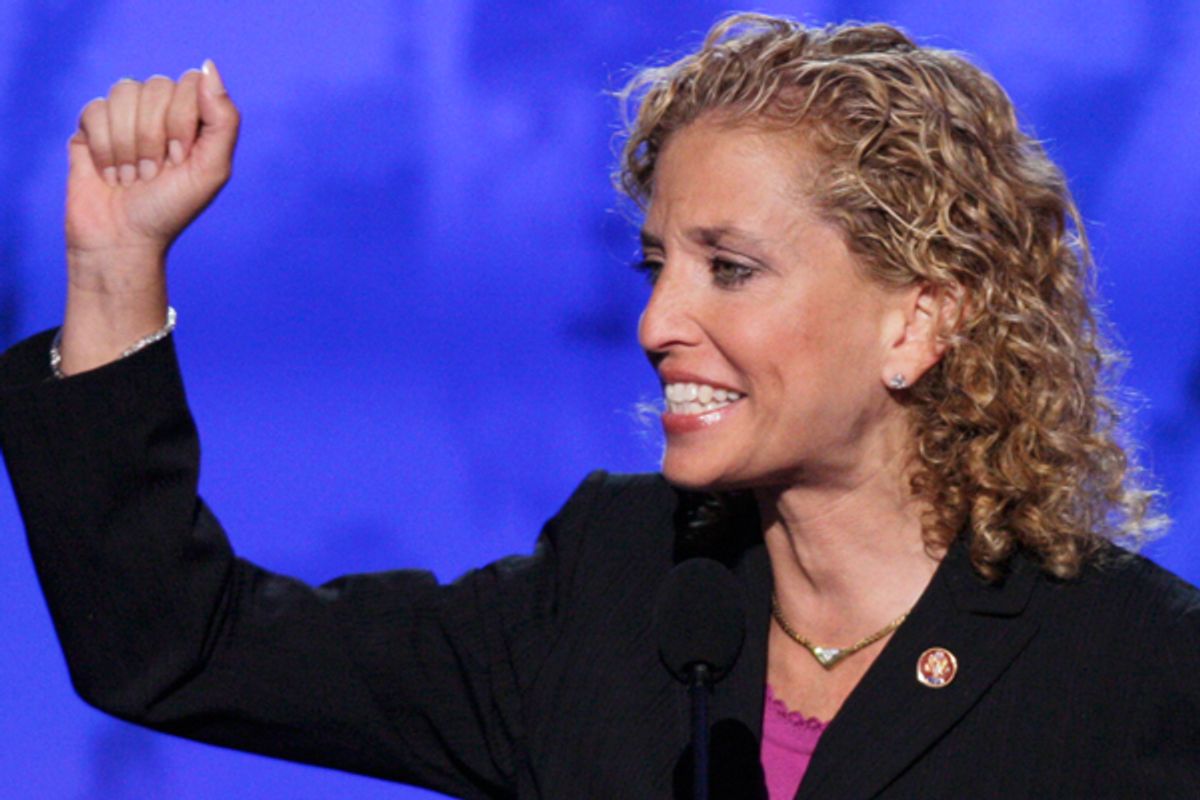 "That’s what he got in 2008," Rep. Debbie Wasserman Schultz, the DNC's chairwoman, told Salon this afternoon. "He’s now the so-called front-runner, he’s running is what is essentially his home state. I mean, if he doesn’t do considerably better than what he got in the election in 2008 when he was not the front-runner, that would be really another underwhelming performance and essentially a loss – like Iowa was."

Romney remains the prohibitive GOP favorite both here and nationally. But he enters today's vote on the heels of what has been described as "the toughest 48 hours of his campaign so far," with the unflattering aspects of his work at Bain Capital receiving sudden scrutiny -- and giving rise to a vicious and lavishly funded negative advertising campaign that a pro-Newt Gingrich Super PAC will soon launch in South Carolina.

The DNC is already having a field day with the clip, but I asked Wasserman Schultz if Democrats -- who rightly cried foul when Romney grabbed an Obama quote out of context and turned it into a misleading attack ad -- had given any thought to leading by example and not doing unto Romney as he's done unto them.

"Look, no matter what, severing an employment relationship is never easy or enjoyable," she said. "Mitt Romney had the opportunity to be specific yesterday and talk about when you don’t like the services an insurance company is providing to you, and he chose not to. He chose to broaden it out and make a more general statement and say that he enjoys firing people who give him services that he doesn’t like. I don’t know anybody who says they enjoy firing people. And in context, people need to know that that’s a sentiment that he feels.”

Asked if she ever thought that Gingrich and other anti-Romney Republicans would end up making the same case against Romney's Bain record that Democrats want to make in the fall, Wasserman Schultz replied, "It’s not really surprising that they would do that because Mitt Romney has consistently said that his private sector experience is what America needs to get the economy turned around.”

"That’s fair game," she said. "He’s put it out there. So looking at what his job actually was, which was as a corporate buyout specialist – someone who outsourced jobs to other countries, someone who fired people, who dismantled businesses, who cut benefits and pension programs. That is what he says is the experience we need.”

Of the possibility that Romney might emerge from the GOP process as a wounded nominee, the chairwoman said, "I think he’s wounding himself. I think he’s doing a really good job of showing people just how callous and out-of-touch and insensitive he is with working families.”

Besides inserting a Democratic voice into a Republican event, there's another reason for Wasserman Schultz to be in New Hampshire this week: The state, once a GOP redoubt, has emerged as a genuine swing state. (A change of a few thousand votes here in 2000 would have made Al Gore president -- and Florida irrelevant.) Wasserman Schultz noted that Democrats opened four new offices in the state today, giving them a total of seven, with 20 paid staffers on the ground. In 2008, Barack Obama carried New Hampshire by 10 points, but it swung as sharply to the GOP in 2010 as any state in America.

"As Mitt Romney has a 'for lease' sign in front of his Manchester office and heads down to South Carolina ... we're going to be continuing to gear up and gets folks fired up about reelecting President Obama in New Hampshire," she said.