Gingrich and Perry rail against Mitt's corporate behavior, but they have no plans to change Wall Street's rules 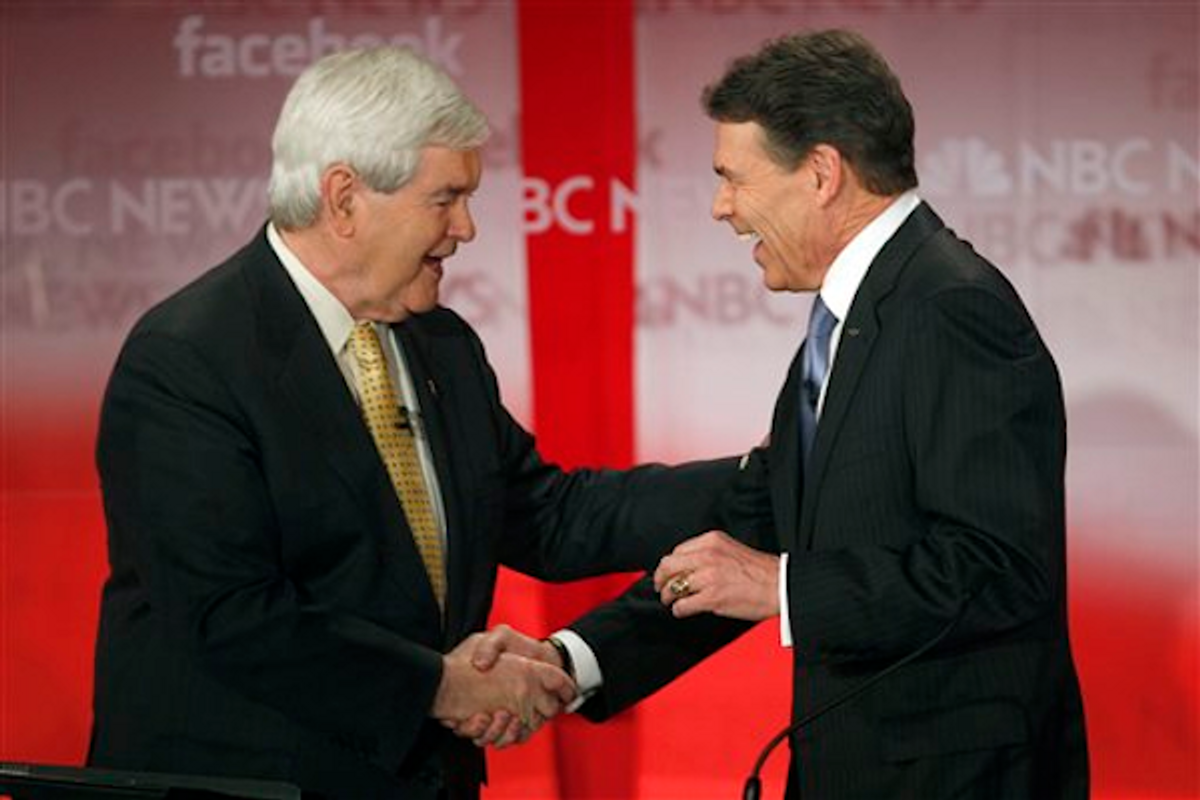 It’s one thing to criticize Mitt Romney for being a businessman with the wrong values. It’s quite another to accuse him and his former company, Bain Capital, of doing bad things. If what Bain Capital did under Romney was bad for society, the burden shifts to Romney’s critics to propose laws that would prevent Bain and other companies from doing such bad things in the future.

Newt Gingrich says Bain under Romney carried out “clever legal ways to loot a company.” Gingrich calls it the “Wall Street model” where “you can basically take out all the money, leaving behind the workers,” and charges that “if someone comes in, takes all the money out of your company and then leaves you bankrupt while they go off with millions, that’s not traditional capitalism.”

Where has Newt been for the last thirty years? Leveraged buyouts became part of traditional capitalism in the 1980s when enterprising financiers began borrowing piles of money, often at high interest rates, to buy up the stock of ongoing companies they believe undervalued. They’d back the loans with the company assets, then typically sell off divisions and slim payrolls, and resell the company to the public at a higher share price -- pocketing the gains.

It’s a good deal for the financiers (the $25 billion buyout of RJR-Nabisco in 1988 netted the partners of Kohlberg, Kravis and Roberts around $70 million each -- and most of Mitt Romney’s estimated $200 million fortune comes from the same maneuvers), but not always for the company or its workers.

Some workers lose their jobs when the company downsizes. Others, when the company, now laden with debt, can’t meet its payments to creditors and has to go into bankruptcy. According to the Wall Street Journal, of 77 companies Bain invested in during Romney’s tenure there, 22 percent either filed for bankruptcy or closed their doors by end of eighth year after Bain’s investment.

But, hey, this is American capitalism -- at least as it’s been practiced for the past three decades. Is Newt proposing to ban leveraged buyouts? Or limit the amount of debt a company can take on? Or prevent financiers -- or even CEOs and management teams -- from taking a public company private and then reselling it to the public at a higher price?

None of the above.

Rick Perry criticizes Romney and Bain pushing the quest for profits too far. “There is nothing wrong with being successful and making money,” says Perry. “But getting rich off failure and sticking someone else with the bill is indefensible.”

Yet getting rich off failure and sticking someone else with the bill is what Wall Street financiers try to do every day. It’s called speculation -- and at least since the demise of the Glass-Steagall Act, investment bankers have been allowed to gamble with commercial bank deposits, other people’s money.

So is Perry proposing to resurrect Glass-Steagall? Not a chance.

Gingrich, Perry and others are putting particular focus on the people who lost their jobs as a result of Romney’s Bain Capital. Gingrich’s Super PAC will be running $3.5 million of ads featuring emotional interviews with some of them.

But what, exactly, are Romney’s opponents proposing to do about layoffs that harm so many people? Millions of Americans have lost their jobs over the last four years -- and as a result have often lost their health insurance, their homes and their savings.

Are Gingrich, Perry and others proposing to expand health insurance coverage for jobless Americans and their families? All I hear from the Republicans is their determination to repeal the law that President Obama championed -- which still leaves millions of Americans uninsured. Do Romney’s opponents have plans to keep people in their homes even when they’ve lost their jobs and can’t pay their mortgages? No. Do they propose expanding unemployment insurance? If memory serves, most of them were opposed to the last extension.

I’m all in favor of reforming capitalism, but you’ll permit me some skepticism when it comes to criticisms of Bain Capital coming from Romney’s Republican opponents. None of these Republican candidates has exactly distinguished himself with new ideas for giving Americans more economic security. To the contrary -- until the assault on Romney and Bain Capital -- every one of them has been a cheerleader for financial capitalism of the most brutal sort.

The party that has repeatedly saved capitalism from its own excesses and thereby preserved capitalism is the Democratic Party. So the only serious question here is what kind of serious reforms Obama will propose when, assuming Romney becomes the Republican nominee, Obama also criticizes Romney’s tenure at Bain Capital.