Who's a real progressive?

Obama and Paul both hold positions anathema to liberals. Voters need to choose which ones to overlook 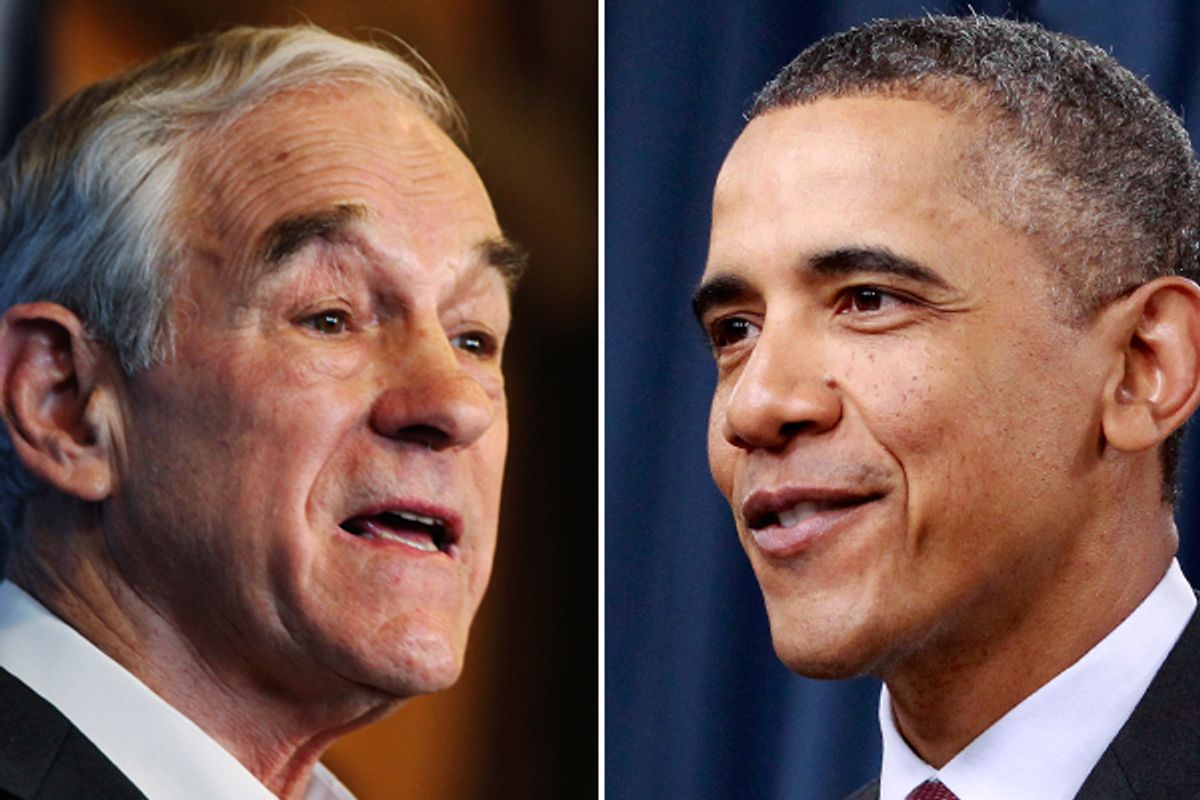 It's rather sad that nearly every article written by a non-libertarian about Ron Paul begins with a disclaimer that the writer is not endorsing Paul for president. Yet, with a virulent case of Ron Paul Derangement Syndrome plaguing partisan Obama loyalists, it bears repeating if only to preempt future mischaracterizations and slander: I am not endorsing Ron Paul for president.

That said, I believe the argument being forwarded by progressive-minded Paul supporters is significant because it embodies a calculating pragmatism that highlights uncomfortable truths both about liberal priorities and about presidential power.

To review the basic Paul profile: When it comes to government social spending and regulation, Paul is more antithetical to progressive goals than any candidate running for the White House. This is indisputable. At the same time, though, when it comes to war, surveillance, police power, bank bailouts, cutting the defense budget, eliminating corporate welfare and civil liberties, Paul is more in line with progressive goals than any candidate running in 2012 (or almost any Democrat who has held a federal office in the last 30 years). This, too, is indisputable.

In seeing Paul's economic views, positions on a woman's right to choose, regulatory ideas and ties to racist newsletters as disqualifying factors for their electoral support, many self-identified liberal Obama supporters are essentially deciding that, for purposes of voting, those set of issues are simply more important to them than the issues of war, foreign policy, militarism, Wall Street bailouts, surveillance, police power and civil liberties -- that is, issues in which Paul is far more progressive than the sitting president.

There's certainly a logic to that position, and that logic fits within the conventionally accepted rubric of progressivism. But let's not pretend here: Holding this position about what is and is not a disqualifying factor is a clear statement of priorities -- more specifically, a statement that Paul's odious economics, regulatory ideas, position on reproductive rights and ties to bigotry should be more electorally disqualifying than President Obama's odious escalation of wars, drone killing of innocents, due-process-free assassinations, expansion of surveillance, increases in the defense budget, massive ongoing bank bailouts and continuation of the racist drug war.

By contrast, Paul's progressive-minded supporters are simply taking the other position -- they are basically saying that, for purposes of voting, President Obama's record on militarism, civil liberties, foreign policy, defense budgets and bailouts are more disqualifying than Paul's newsletter, economics, abortion and regulatory positions. Again, there's an obvious logic to this position -- one that also fits well within the conventional definition of progressivism. And just as Obama supporters shouldn't pretend they aren't expressing their preferences, Paul's supporters shouldn't do that either. Their support of the Republican congressman is a statement of personal priorities within the larger progressive agenda.

Hence, we reach one of those impossible questions: From a progressive perspective, which is a more legitimate camp to be in? In terms of ideological allegiance to the larger progressive agenda, I don't really think there's a right or wrong answer. But in terms of realpolitik, there's a strong case to be made that Paul's progressive-minded supporters understand something that Obama's supporters either can't or don't want to: namely, that a presidential election is a vote for president, not a vote to elect the entire federal government. As such, when faced with candidates whom you agree with on some issues and totally disagree with on other issues, it's perfectly rational -- and wholly pragmatic -- to consider one's own multifaceted policy preferences in the context of what a prospective president will have the most unilateral power to actually enact.

With Paul, it just so happens that most of the ultra-progressive parts of his platform (and legislative career) correspond to the presidential powers that are most unilateral in nature. As President Obama so aptly proved when he ignored the War Powers Act during the Libya conflict and started drone wars in various other countries, a president can start and end military conflicts with the stroke of a pen -- and without any congressional check on power. Likewise, as President Obama showed when he assassinated American citizen Anwar al-Awlaki and then his family without so much as a single criminal charge, a president can now trample or expand civil liberties with the stroke of the same pen. The president also appoints the chairman of the Federal Reserve bank, which now unilaterally grants trillions of dollars in bailouts without intervention from Congress. And, as President Obama proved with his administration's crackdown on California's marijuana laws, a president has far more operational control over the drug war than the congressional committees charged with oversight.

By contrast, the policy areas where Paul is most at odds with progressives are the areas Congress has far more control over -- specifically, budgets and regulatory statutes.

So, for instance, Paul's radical proposals to eliminate major social programs are certainly objectionable, and, if he were president, those proposals would certainly have an impact on the overall political debate. But the Constitution mandates that the federal budget is the purview of Congress. That explains why the final budget so often looks so different from the budget initially proposed by the president -- and why a President Paul wouldn't be able to do to the budget what he could do unilaterally to, say, America's war policy. Likewise, President Paul may want to get rid of civil rights and clean water regulations, and his executive power over appointments and agency rule-making could certainly do great harm to the enforcement of those important regulations. But again, unlike wars, civil liberties, bailouts and domestic police power, Congress has far more control over those regulatory statutes than any single president -- and additionally, many of those statutes permit private legal action (suing, etc.) as an (albeit, imperfect) means of enforcement.

Of course, an Obama supporter might argue that the set of issues they can agree with Paul on are less monumental than the set of issues they agree with Obama on. But don't mistake such a conversation-ending declaration as fact. On the contrary, it's merely a subjective opinion -- and a debatable one at that. Indeed, Paul supporters would make a compelling case that it's exactly the opposite -- that the progressive side of Paul's program relates to more pressing issues than Obama's progressive positions in this, the age of multitrillion-dollar bailouts, deficit-exploding defense budgets, assaults on the most basic tenets of the Bill of Rights and what the Pentagon now calls "the era of persistent conflict" (read: Permanent War). And they have a strong case to make that by virtue of the modern presidency Paul would be guaranteed to actually enact the progressive parts of his program, whereas the progressive parts of President Obama's program are more a question of congressional politics (a good example of that truism was the healthcare bill, which went from a mildly progressive White House proposal to a public-option-free boondoggle for the insurance and drug industries by the time Obama and his lobbyist friends finished massaging it through Congress).

In holding this pragmatic view, it doesn't mean Paul's progressive-minded supporters believe in the reactionary tenets of Paul's agenda (eliminating major social programs, opposing civil rights laws, ending all taxes, having a history associated with racist newsletters, etc.) any more than it means Obama's progressive-minded supporters are thrilled with all of the president's ultra-conservative actions (wars, mass killing of civilians, trampling of civil liberties, bank bailouts, a racist drug war, etc.). It only means that there's a calculation at work -- one that takes into account the realities of presidential power.

Is this calculation reasonable, or at least defensible within the progressive coalition? I'd say yes (even though, again, I'm not endorsing Paul). To paraphrase the most standard apologia Democratic partisans use to defend President Obama (one overused with regard to Obama, IMHO), a president is not a Superman or a savior -- on the issues in which he doesn't have unilateral control, he has to work with Congress and therefore isn't always the sole "decider" of policy outcomes. That's especially the case at a moment when Washington is more gridlocked than ever.

Faced with that reality, and sick of a political system that is paralyzed by the Manichaean blood sport of red-versus-blue, many voters of all stripes are focusing primarily on the issues that the president has total control over. These issues, after all, are hardly insignificant -- and they are the ones a presidential election can instantly change.

Paul's progressive supporters seem to understand that truism, while many Obama supporters find it too inconvenient to acknowledge. That's fine. In fact, that's what democracy is all about -- the freedom to make your own choice. But don't think the choice being made by Paul's supporters is so obvious a progressive litmus test when the same reductionism used to tar and feather those supporters ("they're racist because of his newsletters!") could be used against Obama backers ("they're baby killers because of the president's wars!").

Despite media hype and activists' glib talking points, such election choices between imperfect candidates are not so simple, nor should they be when a truly informed vote means factoring in the unspoken nuances of presidential power.