A suggestion by a right-wing blogger in 2007 that Iran's scientists be killed prompted fury; but now? 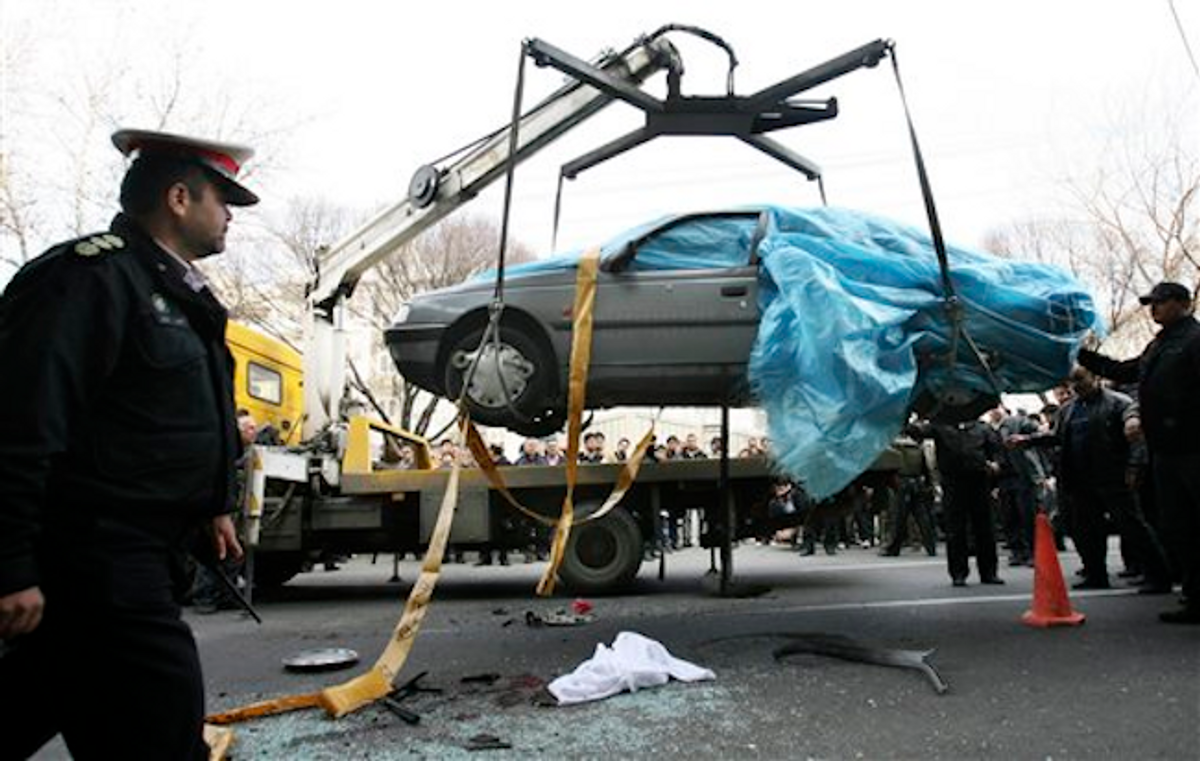 Several days ago I referenced a controversy that arose in 2007 when the law professor and right-wing blogger Glenn "Instapundit" Reynolds criticized President Bush for not doing enough to stop Iran's nuclear program and then advocated that the U.S. respond by murdering that nation's religious leaders and nuclear scientists. "We should be responding quietly, killing radical mullahs and Iranian atomic scientists . . . ," he argued. The backlash against Reynolds' suggestion was intense, especially among progressive writers.

Back then, I wrote about Reynolds' suggestion several times, but I was far from alone. Law Professor Paul Campos wrote a column in the Rocky Mountain News denouncing Reynolds for publicly advocating "murder," which, he pointed out, is exactly what this would be given that the U.S. is not at war with Iran (he went on to suggest that targeting civilian religious leaders and scientists would still be murder even if the U.S. were at war with Iran); Campos added: "government-sponsored assassinations of the sort Reynolds is advocating are expressly and unambiguously prohibited by the laws of the United States." Law Professor Kevin Jon Heller documented with absolute clarity that such assassinations would be illegal in the absence of a formal war.

But the angriest reactions came from progressive bloggers, who widely denounced Reynolds as "contemptible" for suggesting this; one progressive writer, Lindsay Beyerstein, was horrified that one could even suggest such a thing, explaining that she "despair[s] for our society when it's necessary to supply a rigorous analytical exposition of why our government shouldn't have scientists and religious leaders whacked." Scott Lemieux railed against what he called Reynolds' "kooky scheme for illegal death squads" as "crackpot," "dumb" and "nuttier than a Planters factory." And Kevin Drum, then of Washington Monthly, went the furthest of all -- in a post he entitled "Terrorism" -- branding the killing of Iran's scientists as "Terrorism":

I imagine a lot of people agree with [Reynolds], but his recommendation really demonstrates the moral knot caused by George Bush’s insistence that we’re fighting a “war on terror.” After all, killing civilian scientists and civilian leaders, even if you do it quietly, is unquestionably terrorism. That’s certainly what we’d consider it if Hezbollah fighters tried to kill cabinet undersecretaries and planted bombs at the homes of Los Alamos engineers.

If you think Iran is a mortal enemy that needs to be dealt with via military force, you can certainly make that case. But if you're going to claim that terrorism is a barbaric tactic that has to be stamped out, you can hardly endorse its use by the United States just because it's convenient in this particular case.

What is most amazing about all this is that, a mere three years later, some combination of Israel and the U.S. are doing exactly that which Reynolds recommended. Numerous Iranian nuclear scientists are indeed being murdered.

In January, 2010, a remote-controlled bomb attached to a motorcycle killed Masoud Ali Mohammadi, 50, who "taught neutron physics at Tehran University." In November, 2010, two separate car bombs exploded within minutes of each other on the same day, one that killed nuclear scientist Majid Shahriar and wounded his wife, and the other which wounded another nuclear scientist, Fereidoun Abbasi, along with his wife. Then, in July of last year, Darioush Rezaei, 35, was shot dead and his wife was wounded by two gunmen firing from motorcycles outside of their daughter's kindergarten; Rezaei "did his doctorate in neutron transport - which lies at the heart of nuclear chain reactions in reactors and bombs" and "was a member of the Atomic Energy Organization of Iran, the country's official atomic energy commission."

And now, yet another Iranian scientist has been killed. According to Iranian media, a 32-year-old university professor, Mostafa Ahmadi-Roshan, died when an assailant riding on a motorcycle attached a magnetic bomb to his car, which then detonated and killed him. According to The Washington Post's Thomas Erdbrink, a conservative news outlet in Iran reported that the young scientist "was believed to be involved in procuring materials for Iran’s main nuclear enrichment facility in Natanz."

What's most remarkable here is to compare the boisterous, furious denunciations of the mere suggestion by a blogger on the Internet that Iranian scientists be killed, versus the relative silence in the face of its actually being done in real life, now that the corpses of murdered Iranian scientists are beginning to pile up. Does anyone doubt that some combination of the two nations completely obsessed with Iran's nuclear program -- Israel and the U.S. -- are responsible? (U.S. officials deny involvement while pointing the finger at Israel, whose officials will not comment but "smile" when asked; the CIA has "targeted" Iran's scientists in the past, several of whom have disappeared only to end up in U.S. custody, including one who "resurfaced in the United States after defecting to the CIA in return for a large sum of money"). At the very least, there has been no denunciation from any Obama officials of whoever it might be carrying out such acts.

I have no doubt that Professors Campos and Heller would apply the same legal rationale now that it's actually being done, but what about the progressives who so stridently denounced Reynolds? Does Lemieux still believe that whoever is responsible -- Israel, the U.S., or some combination -- is guilty of dispatching "illegal death squads"? Does Beyerstein still "despair for our society" that such acts could even be contemplated? Does Drum still believe that whichever political leaders are responsible for these killings are Terrorists; specifically: if, as is widely assumed, the Israelis are responsible, does that mean that Israel is a Terrorist state, and if U.S. agencies are complicit in some way, does that mean President Obama is a Terrorist, a state sponsor of Terrorism or, at the very least, a supporter of Terrorism?

In general, the American covert war against Iran is extraordinarily dangerous and probably illegal (it's certainly unauthorized), but in particular, the assassination of Iran's scientists is just reprehensible. Now that it's actually happening, one wishes the reaction to it were even partially as aggressive as it was when a right-wing blogger suggested it.

Three other brief noteworthy items: (1) yet again, the New York Times' Public Editor admonishes that newspaper for baseless reporting about Iran that overstates the threat it poses (specifically for overstating the IAEA's assessment of Iran's nuclear program); FAIR first raised objections to the offending article last week; (2) here is a telling scene from Tom Friedman's current field trip to Cairo; and (3) a sixth-grader named Wolf writes a nice little school report for his civics class on the presidential race.

UPDATE: This morning, Haaretz has a timeline of what it calls "Mysterious deaths and blasts linked to Iran's nuclear program" -- and by "linked to," they mean: "aimed at" (h/t James Carter). It includes the murder of these scientists as well as various explosions killing many people. If you removed the proper nouns from this timeline (Iran, Ahmadinejad, Natanz), very few people would have any doubt that this is Terrorism.

UPDATE II: The right-wing religious extremist Rick Santorum said previously: "On occasion scientists working on the nuclear program in Iran turn up dead. I think that's a wonderful thing, candidly"; he added: "I think we should send a very clear message that if you are a scientist from Russia, North Korea, or from Iran and you are going to work on a nuclear program to develop a bomb for Iran, you are not safe." This is how he justified all that:

If people say, "well, you can't go out and assassinate people" -- well, tell that to Awlaki. OK, we've done it. We've done it to an American citizen, so we can certainly do it to someone who's producing a nuclear bomb that can be dropped on the state of Israel . . . .

We better hope and pray Rick Santorum never becomes President or else the legal prohibitions against assassinations will simply be ignored and that will become standard American policy -- oh, wait. Meanwhile, long-time commenter DCLaw1 poses this question:

Even for people who don't believe the US has anything to do with the assassination of Iranian scientists, just flip the scenario: how would they react to news that Israeli scientists were being systematically murdered, and Iranian officials just smiled and acted coy when asked about it? What would they say about that, and what would they say the US and Israel would be justified to do in response?

To answer that, just consider the consensus outrage that spewed forth when it was claimed (ridiculously) that Iran was sponsoring a Terror plot on U.S. soil to have a failed Texan used car salesman hire Mexican drug cartels to kill the Saudi ambassador: Terrorism!

UPDATE III: Lemieux responds by saying: "If the United States was involved in the killings — and we should stress the 'if' here — the Obama administration’s actions were both illegal and immoral, for the same reasons stated in my earlier posts." Similarly, Drum strongly implies that he believes the assassinations are Terrorism. Meanwhile, Professor Campos, writing on the blog where Lemieux writes, tries to explain to Lemieux's angry commenters what the point is of asking these questions and what the benefit is of hearing denunciations not only when a right-wing blogger proposes it, but also when it's done in reality (in comments, David Mizner attempted the same).

For its part, the U.S. denied involvement in today's murder and said they "strongly condemn all acts of violence, including acts of violence like what is being reported today," while "in Israel . . . the denial was much more vague. Brig. Gen. Yoav Mordechai, the Israeli military spokesman, wrote on his Facebook page that 'I don’t know who took revenge on the Iranian scientist, but I am definitely not shedding a tear,' Agence France-Presse reported." Nonetheless, "Theodore Karasik, a security expert at the Institute for Near East and Gulf Military Analysis in Dubai, said the assassination fit a pattern over the past two years of covert operations by the West and its allies to 'degrade and delay' Iran’s nuclear program."

UPDATE IV: Beyond what's discussed here, John Glaser looks at the publicly available evidence, including what has been reported in The Guardian and Der Spiegel, regarding who is likely behind this spate of killings of Iranian scientists.