The former senator says there are no "Palestinians" in the West Bank. Does he oppose a two-state solution? 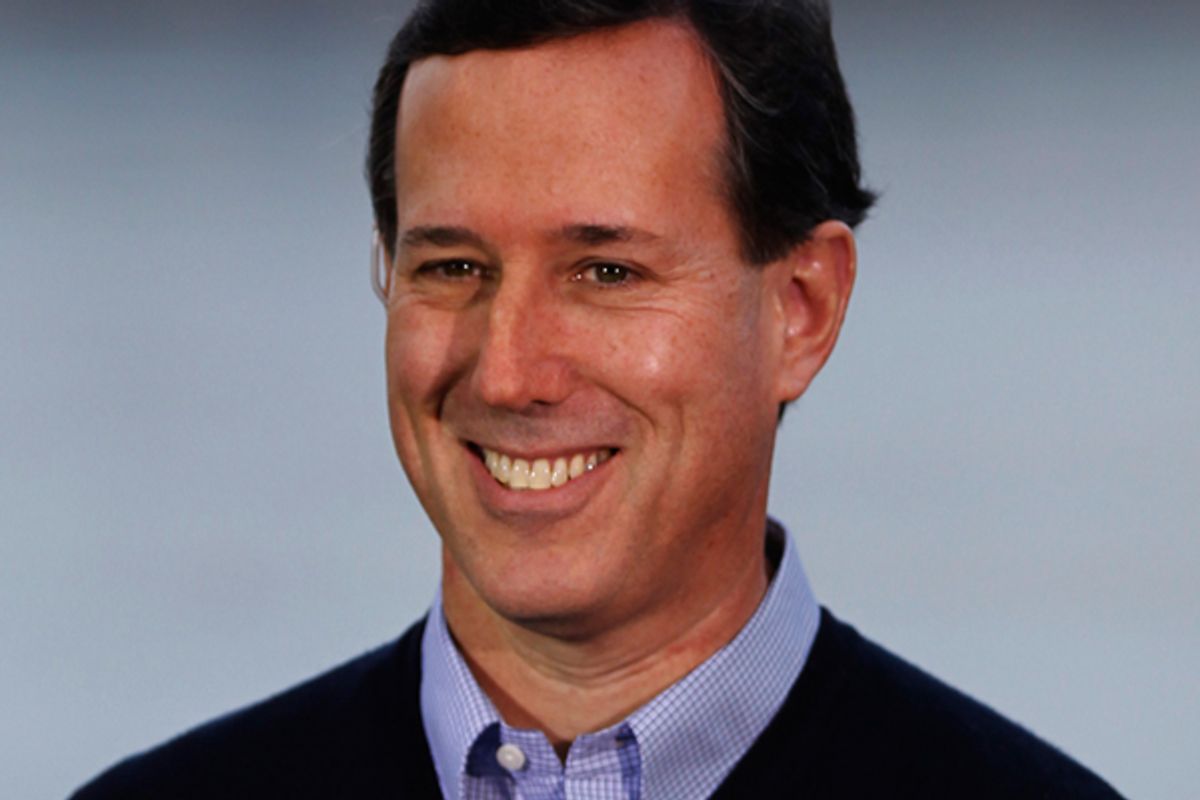 Now that Rick Santorum is getting a second look from the public and the press, his statement in November that  “all the people who live in the West Bank are Israelis, they’re not Palestinians” has been receiving a lot of renewed attention.

But, as it turns out, Santorum has made contradictory statements on this point, and his campaign has declined multiple opportunities to elaborate on and clarify his position on the Israel-Palestine conflict.

Israel has been a key issue in the GOP primary, with Newt Gingrich’s super PAC recently snagging a $5 million donation from billionaire Sheldon Adelson in large part because of Gingrich’s hard-line position on the Palestinians.

To review, here’s what Santorum said to an Iowa voter late last year:

The logical next question, as Robert Wright lays out in detail, is: What does Rick Santorum think should happen to the 2 million-plus Palestinians (or, as Santorum argues, “Israelis”) living in the West Bank? Should they be given full civil and voting rights? That would likely mean the end of a Jewish-majority Israel.  Should they be permanently integrated into Israel as residents without rights? That’s where the “apartheid” issue comes in. Or should these people be made to somehow leave or be forced out of the land?

Santorum’s campaign has not responded to multiple email and phone messages seeking elaboration on his position.

What makes the matter even more confusing is that Santorum has himself recently used the terms “occupied” and “Palestinians.”

And in a National Review column in May, he repeatedly referred to “West Bank Palestinian leadership.” The use of that language clearly contradicts his more recent argument that “all the people who live in the West Bank are Israelis, they’re not Palestinians.”

That same column makes clear that Santorum opposes the idea of a contiguous Palestinian state:

Making matters still worse, President Obama said, “The Palestinian people must have the right to govern themselves, and reach their potential, in a sovereign and contiguous state.” Take a look at a map of Israel and see what this “contiguous state” means. It means transecting Israel in two, further weakening Israel’s possible defenses from terrorism, missile launches, or invasion. As Israeli prime minister Bibi Netanyahu put it Friday, “Peace based on illusions will crash eventually on the rocks of Middle East reality.” Who do we think will be the worse-off victim in such a crash?

Many observers would argue that opposing a contiguous Palestinian state amounts to opposition to any viable two-state solution.

In a 1998 column in the Jewish Exponent (via Nexis), Santorum wrote that, “Only Israel has the right -- and the capacity -- to decide how to administer the West Bank territories.” He also paid lip service to the idea of a “peace process” – though without mentioning anything about a Palestinian state:

[Israel's] continued existence as a Jewish homeland is critical and we are resolved that Israel maintain the minimum territory it considers necessary for an effective defense.

Even vague talk of a “peace process” has since disappeared from Santorum’s rhetoric on Israel-Palestine. But the question remains: Does he believe in some kind of one-state solution to the conflict? I’ll keep trying to get an answer from his campaign and update this post if I hear back.