The arts funding war the left will always lose

The right has defined the issue. The entire conversation needs to change if public arts aid is to be saved 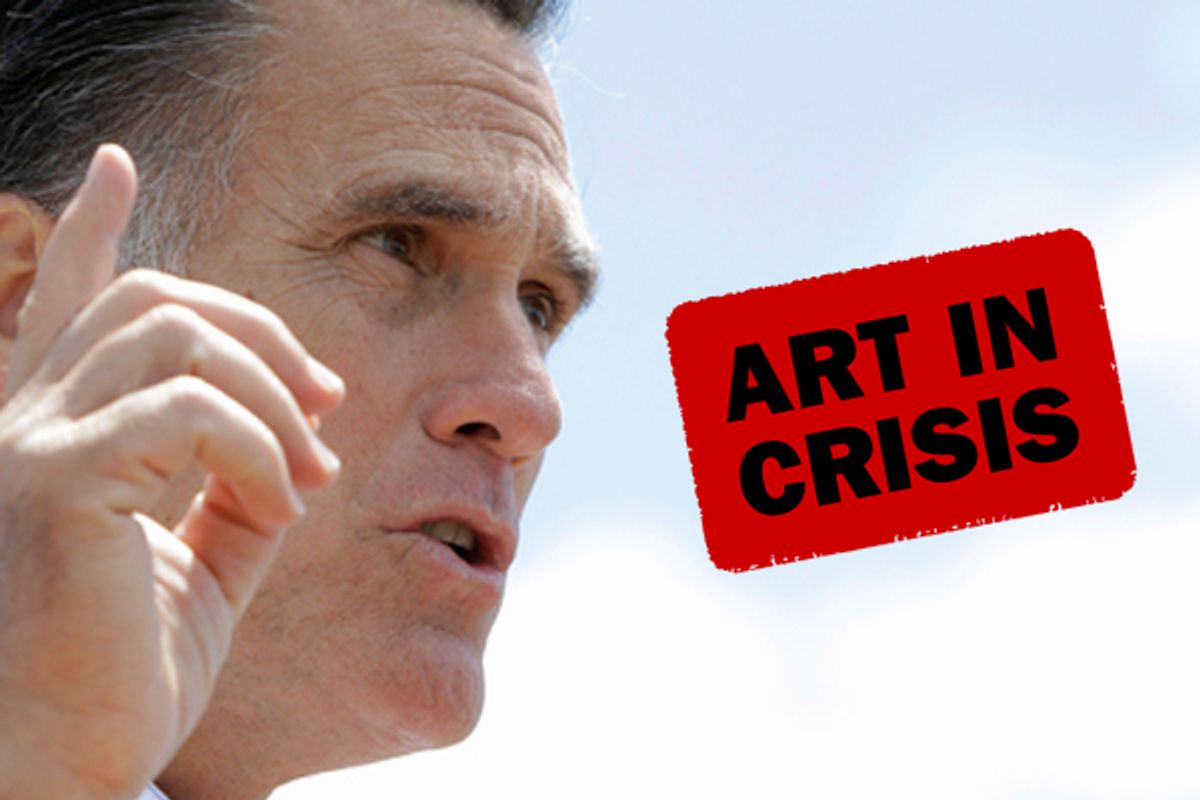 Mitt Romney said last week he’ll kick funding for the arts and public broadcasting to the curb if he gets to be president.

“We’re not going to kill Big Bird, but Big Bird is going to have advertisements,” Romney said, while speaking at Homer’s Deli in Clinton, Iowa.

Like virtually every other conservative candidate, Romney has had it — had it! — with government expenditures like public broadcasting, and he wants to save taxpayers money by cutting federal funding to programs like PBS and the National Endowment for the Arts.

But Romney’s threat/promise isn’t about arguments. For the past 30 years, opposition to government funding for the arts has been a rote exercise for conservatives wanting to demonstrate ideological bona fides. It’s not just about opposing arts funding, it’s about actively seeking to defund the arts (two different things). Arts funding is shorthand for a laundry list of evils, from rampant government handouts to profligate spending, suspicious values, and out-of-touch elitism. Framed in these terms, who wouldn’t be opposed? Opposing arts funding checks the boxes on numerous fundamentalist conservative issues.

Because it does, no amount of argument – good things the arts do, what a great return on investment they are, or the mountains of studies designed to convince – makes a whiff of difference. It isn’t about the arts.

It’s a cliché, but true: Those who frame an issue control it. Republicans want to win the support of moral absolutists and those who believe, as Ronald Reagan famously said: “Government is not the solution, it’s the problem.” In this fight, the arts are collateral damage, symbol rather than target. For all the right reasons. The arts are shades, not blacks and whites. The arts are messy collective investment and experiment. They’re about undependable ideas often intended to provoke rather than reaffirm. The arts represent, for a certain class of politician, a threat to “traditional” values.

As long as fundamentalist ideological conservatives are able to define the issue, the arts lose. Period.

I think as long as it’s about money, the arts lose. As long as the conversation starts with funding, the arts lose. Yet that’s where the arts often start; if the debate is about money, then we try to prove what a good investment the arts are.  But the problem with economic impact studies is that if someone isn’t in the market to invest – no  matter how good the return is – they won’t. Concurrently, the problem with arguing aesthetic value is that if the aesthetic values aren’t my aesthetic values, they don’t sound compelling to me.

Conservatives have been successful not because they have a better economic case, but because they make an argument about values. In a time when people are angry over a sour economy and a lack of accountability for those they perceive got us there, they preach caution, living within our means, and trying to impose more responsible behavior. Argued in these terms, again, who wouldn’t sign on?

Against this, how does arguing for public funding for the arts get anywhere? The argument seems so … small … so self-serving. By the time it’s about money, the argument has already been lost. The arts actually are about values. The question is how to argue them before the argument ever gets to funding.

Douglas McLennan is the founder and editor of ArtsJournal.com. He has been a regular contributor to Salon, as well as Newsweek, The New York Times, The Los Angeles Times, The Wall Street Journal and the London Evening Standard.