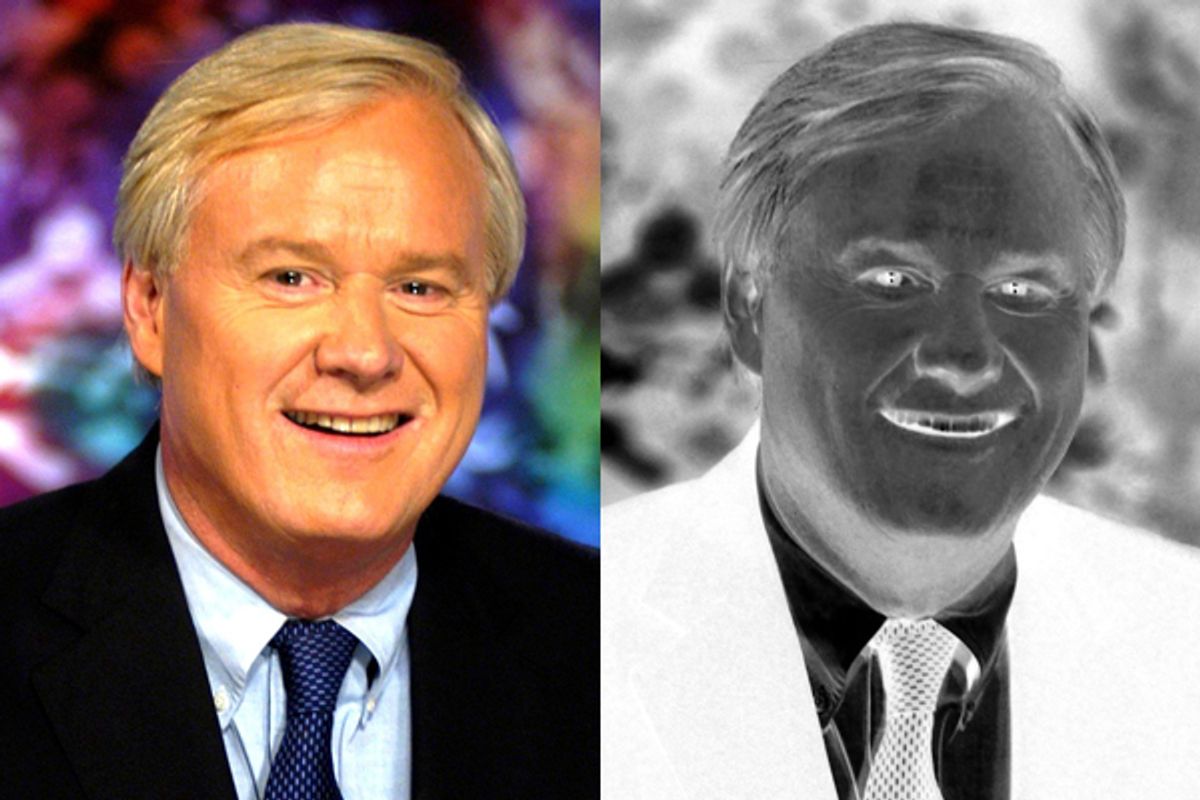 The derisive, duck-snort "Ha!" that announces the Sideshow segment on "Hardball" might be Chris Matthews' actual laugh, or a sample of the Darrell Hammond "Saturday Night Live" impression. That's apt, because with Matthews, it is always hard to find the line between reality and parody.

If there are a half-dozen Brian Williams laughs, there are more Chris Matthews personalities -- and they were all on display during MSNBC's coverage of the New Hampshire primary last night. It was an enraged and often electrifying performance -- the over-the-top outraged citizen, the partisan happy warrior, the loony carnival barker who yearns to be taken seriously, the entertainer trying to convince us Chuck Todd or Michael Steele has an original insight, the Washington insider happy to scrape before the likes of Eugene Robinson and Jonathan Alter -- all at once.

Matthews' unhinged passion and needy insecurity, of course, is what makes him subject to satire in the first place. Good Chris is the former Tip O'Neill aide with a strong sense of right and wrong. Bad Chris is the blowhard relentlessly pushing his book -- you know, the one he wrote all by himself. But in a devastating exchange with Steve Schmidt, who ran John McCain's 2008 presidential bid, Matthews cut through the pious baloney in Mitt Romney's victory speech -- the meaningless but endlessly repeated red meat about European socialism and Democratic envy of rich people -- with a wicked acuity.

"I just want to ask a question of Steve Schmidt. I'm trying to put all this together, the rhetoric and the position of the candidate," Matthews said, according to the MSNBC transcript. "He used phrases tonight like politics of envy against the Democrats. And I assume against some of his own party people there, like Newt Gingrich, the resentment of success. Is this why he won't release his tax returns?

Schmidt, stuck in the role of Alan Colmes, demurred that he didn't have an answer for that. "You do know why," Matthews charged, and Schmidt finally agreed that he did, only to have Matthews steamroll on in such a way that Rachel Maddow had to jump in and remind him that they were colleagues, that Schmidt was not on the show representing Romney.

MATTHEWS: So it's not true.

Exactly. It's not true. What a different place cable news would be if only people said that more often.

Matthews -- whose outrage over the Romney Super PAC ads in Iowa was so over-the-top that he compared them, repeatedly, to the firebombing of Dresden during World War II -- finally channeled his anger and smarts into a direct hit, and injected some energy into a chummy MSNBC set where, on most nights, the only fun comes from imagining how much everyone else despises Ed Schultz. (It doesn't tax the imagination.)

Still, it didn't take long for the cringeworthy hack to reemerge. And it sure is uncomfortable TV when the pundits sit around praising, yes, each other. "Anyway, thank you, Jonathan Alter, great guy, great historian, as well as a great journalist. And Eugene Robinson, I don't have to brag, son of the South, overcame that and became a Pulitzer Prize-winning columnist -- one of the best ever."

The shock on Alter's face was priceless -- someone give that late-night cable-news director a raise -- as even a longtime "Hardball" regular rolled his eyes at the return of this sad spectacle of shtick.