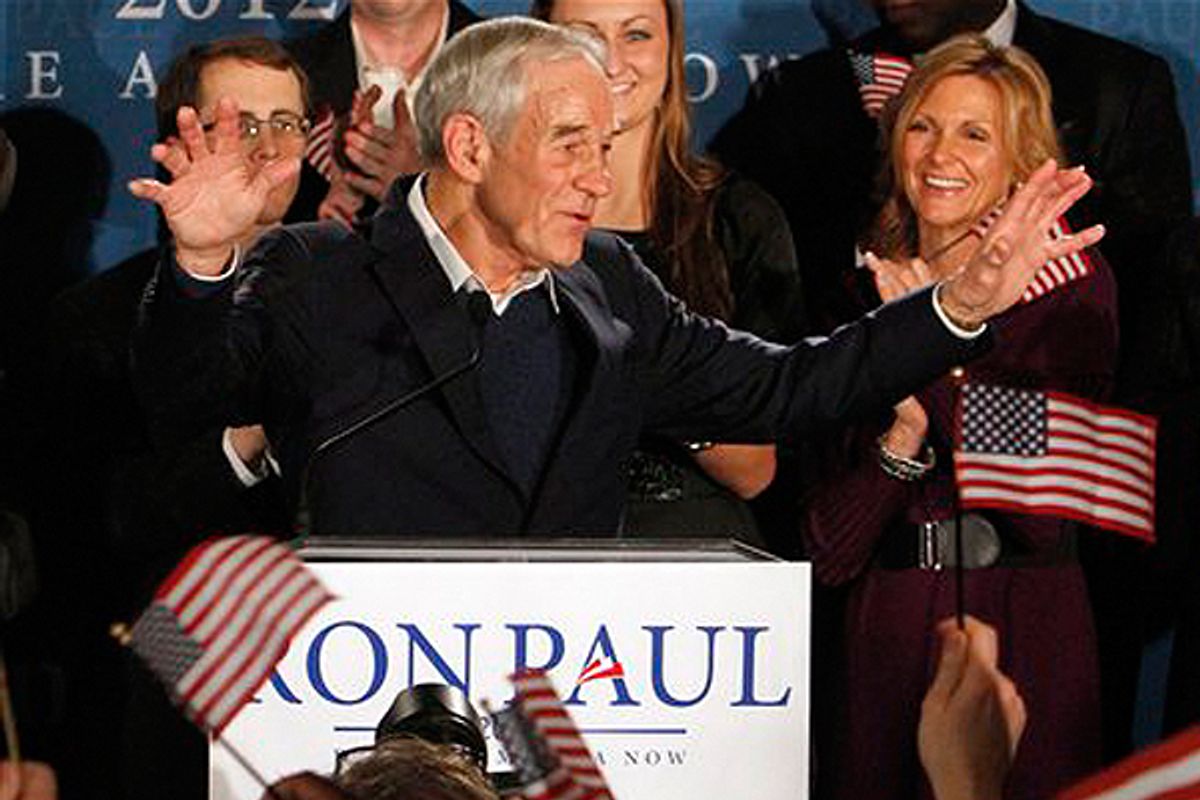 NASHUA, N.H. -- Ron Paul nabbed 23 percent of the vote in New Hampshire on Tuesday night, good for second place and a strong follow-up to his third-place finish in Iowa last week. But the immediate post-primary analysis is focusing on Newt Gingrich, Rick Santorum and just about every other non-Paul candidate as the main obstacles separating Romney from the nomination.

Not surprisingly, Paul doesn't share this interpretation. As the results were rolling in, he told CNN that he's done more in the first two contests to establish himself as Romney's main rival than anyone else.  "I would say we're the only ones really in the race with him," he said.

The reality is that Paul's showing is very significant in some ways and not that significant at all in others. It just depends what you're trying to understand.

Clearly, Paul speaks to a significant and growing number of Americans, and it's worth trying to understand what specific aspects of his platform are energizing each component of his coalition. How big a factor, for instance, is his support for relaxed drug laws in the enthusiasm of young voters? Does the surprising level of evangelical support he won in Iowa (18 percent -- or second place) suggest there may be more room for dissent on Israel and the Middle East on the Christian right than is commonly assumed -- or are Paul's religious conservative backers simply ignoring his foreign policy views and supporting him for other reasons? And so on. Paul's coalition is as funky as his platform, and Paul-ism is a political force that isn't going away any time soon.

And now for the insignificant part: In terms of understanding which candidate the Republican Party will nominate for president in 2012, Paul's performance Tuesday doesn't really tell us much.

There remains plenty of evidence that he faces a unique and relatively low ceiling within the Republican Party, and winning 21 percent in Iowa and 23 percent in New Hampshire doesn't really change that. His coalition is composed of a large number of independents (among actual Republicans, he won only 16 percent in the Granite State) and his unfavorable scores among Republican voters nationally and in key primary states are poisonously high. This is a function of his breaks with GOP orthodoxy on several sensitive issues, most notably foreign policy -- breaks that the party's opinion-shaping elites, who are largely hostile to Paul because of his apostasies, are happy to point out to rank-and-file Republicans in blunt, alarmist terms.

Thus, Paul's candidacy seems most akin to previous efforts from Jesse Jackson, Jerry Brown and Pat Buchanan -- message/cause campaigns that attracted real followings but that didn't grow their support as other candidates dropped out during the race. Buchanan, for instance, won New Hampshire with 29 percent in 1996 -- at which point GOP opinion-shapers opened fire on him and ensured that he never won another nominating contest.

In other words, there's good reason to believe that Paul will continue to attract significant support and maybe even win some small state caucuses, but that he's not at all positioned to become a consensus candidate within the party. This is why the Romney campaign has spent far more time and energy worrying about Republican candidates who will end up receiving far fewer primary season votes than Paul -- like, say, Rick Perry, who netted just 1 percent on Tuesday. But Perry, unlike Paul, came to the race with the potential to unite a clear majority of Republicans, and initially seemed on his way to doing so.

This actually points to two more ways in which Paul's New Hampshire performance is very significant: 1) His success is only the latest example of New Hampshire elevating a candidate the national party's most powerful forces would prefer to ignore -- raising the question of whether the Granite State will retain its first-in-the-nation role in the GOP process for much longer; and 2) the size, uniqueness and loyalty of his coalition makes the possibility of a third-party Paul candidacy this fall worth considering.

What this all means is that if you're interested in figuring out which candidate will emerge from the Republican race and have roughly a 50 percent chance of being the next president of the United States, Paul's New Hampshire performance just doesn't mean much. But that's not the same as saying it means nothing at all -- because it highlights all sorts of questions that are well worth exploring.