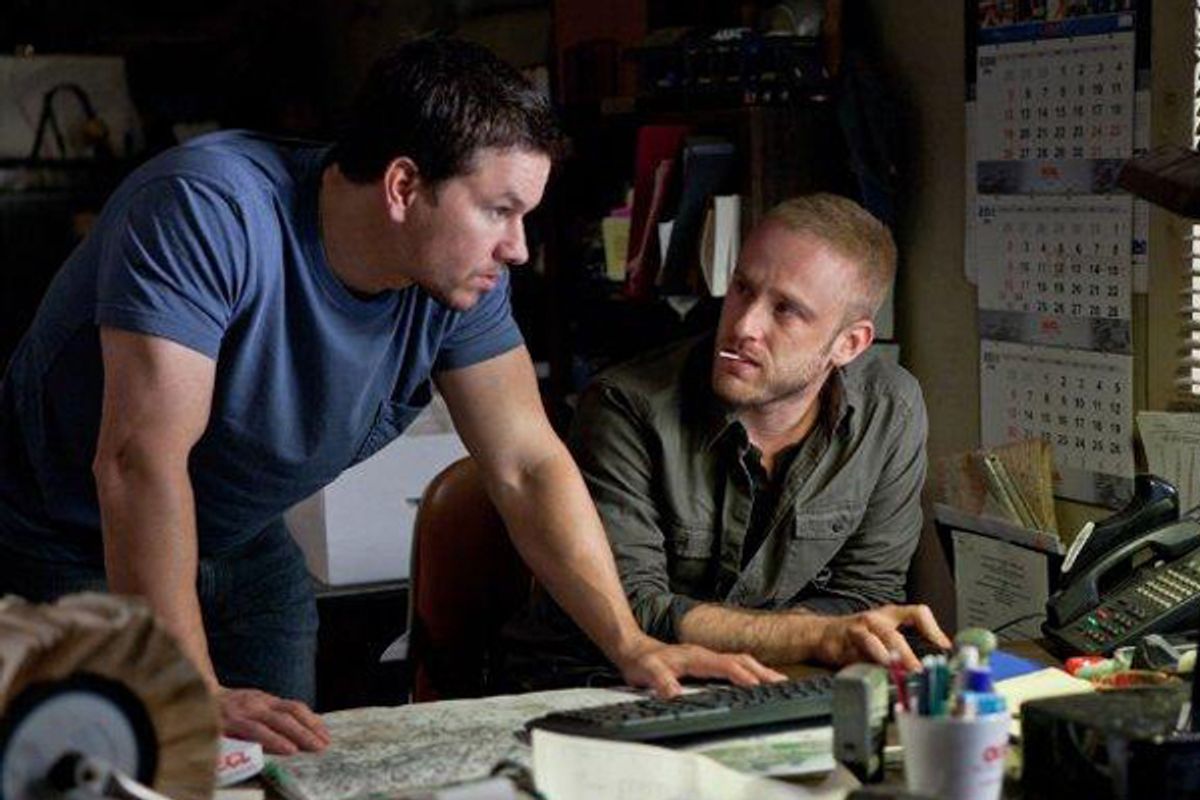 My Icelandic vocabulary doesn't go very far -- OK, it doesn't go anywhere at all, although I know that the Icelandic parliament is called the Althing and is more than 1,000 years old, which is awesome. But if I knew the word for "craptastic" I'd haul it out now. Our subject today is the Mark Wahlberg star vehicle "Contraband," a smuggling thriller that boasts three appealing tough-guy actors, locations in New Orleans and Panama, and a whole bunch of expensive second-unit photography involving freighters and shipping containers and dockland cranes and helicopters. It's exactly the sort of movie that Hollywood specializes in, the kind which seems on paper as if it ought to be entertaining, but winds up a massive and chaotic drag.

"Contraband" marks the latest depressing venture into Hollywood by Icelandic director Baltasar Kormákur, who has made some agreeably weird films in Europe but seems to be magically transformed into a maroon through contact with large amounts of United States currency. (His previous English-language films are "Inhale" and "A Little Trip to Heaven," and if you've seen either of those, I'm genuinely sorry.) All you can say about this movie is that some of it is OK -- the gritty, downscale settings in the Big Easy or the back-street barrios of Panama City, the satisfying if highly generic action scenes, Wahlberg's agreeable performance as the family man who thinks he's left his criminal past behind -- and that, for a minute or so at a time, it can even seem pretty good. Giovanni Ribisi plays a scum-sucking New Orleans criminal with dubious facial hair, who enjoys terrorizing women and children but is constantly getting his ass kicked by Wahlberg. It's like the ur-Giovanni Ribisi character! There's also Ben Foster with his head shaved tight, playing a supposedly good guy who is backsliding into alcoholism and associated depravity of all kinds.

But while Kormákur occasionally conveys the impression that this might be an enjoyably mindless entertainment, it's much more like a cynical hash job, whose faux-realistic manner can't hide all the hackneyed crime-movie situations. Wahlberg plays Chris Farraday, a supposedly legendary New Orleans smuggler who has gone straight but gets dragged back into dirty business when his stringy-haired brother-in-law (Caleb Landry Jones) winds up owing 700 G's to Ribisi's character, who sits around all day in dive bars drinking tall boys and referring to muscular, meathead-type fellows as "bitches." Now, of course you can get away with a setup this familiar if you're going to deliver an archetypal or classic crime movie, but this one's an exhausting muddle. In fact, I get a strong whiff of condescension off "Contraband," as if Kormákur and screenwriter Aaron Guzikowski (adapting the 2008 film "Reykjavik-Rotterdam," which Kormákur produced) believe they're giving the masses what they want: tough dudes talkin' tough, bustin' heads, crashin' cars and droppin' their terminal G's, pseudo-gangsta white-boy style.

So Chris and his buddy Danny (Lukas Haas) sign onto a freighter crew presided over by the always-enjoyable J.K. Simmons, as the irascible and corrupt captain, in order to smuggle a bunch of counterfeit money back from Panama to pay off his brother-in-law's debt. It all goes ludicrously wrong: The ship crashes into the docks in Panama City, the counterfeit bills are no good, the Panamanian crime lord played by Diego Luna turns out to be both nutso and bloodthirsty (now there's a twist), and somehow Danny and Chris wind up in the middle of an armored-car heist that involves the entire population of Panama City getting killed except for them. (As you know if you have seen enough movies, white dudes are invulnerable to bullets, although ugly facial hair, smallness of stature or uncertain sexual orientations have been known to counteract this.)

Back in New Orleans, Ribisi's character is stalking Chris' wife and kids -- and let me say a word on behalf of Kate Beckinsale, who has to play the most retrograde, whiny, picked-on and permanently victimized wife character in the history of the movies. The word is: Kate, you're still looking good, and please give your agent a stern talking-to about this one. I realize the "Underworld" franchise has gotten pretty stale, but sometimes taking a role just for the heck of it is not the right move. And then there's Foster as Chris' red-eyed, stubble-headed old buddy Sebastian, whose A.A. attendance is slipping and who's making all kinds of sinister, Judas-flavored phone calls. See, there's a whole bunch of arcane plot to "Contraband," it's just that none of it is in any way interesting or surprising.

I spent much of December complaining about the onslaught of sober-sided prestige movies and halfway looking forward to the flotsam and jetsam of the new year. I was forgetting how bad Hollywood's January output can actually be, and I would now officially like to walk that back. You definitely ought to be able to make an agreeable thriller out of this cast, these settings and this basic story, and the fact that Kormákur doesn't is a powerful negative endorsement. Watching "Contraband," you feel like a cascade of bad decisions were made all along the line, from the cut-and-paste dialogue to the muddled editing to the fact that we spend lots of time watching the process of smuggling -- basically, people hiding stuff in dark places -- while the characterization and storytelling feel like afterthoughts. Wahlberg, who also produced this fiasco, is a canny star who generally makes good decisions, but he needs to boot this director back to the Althing.