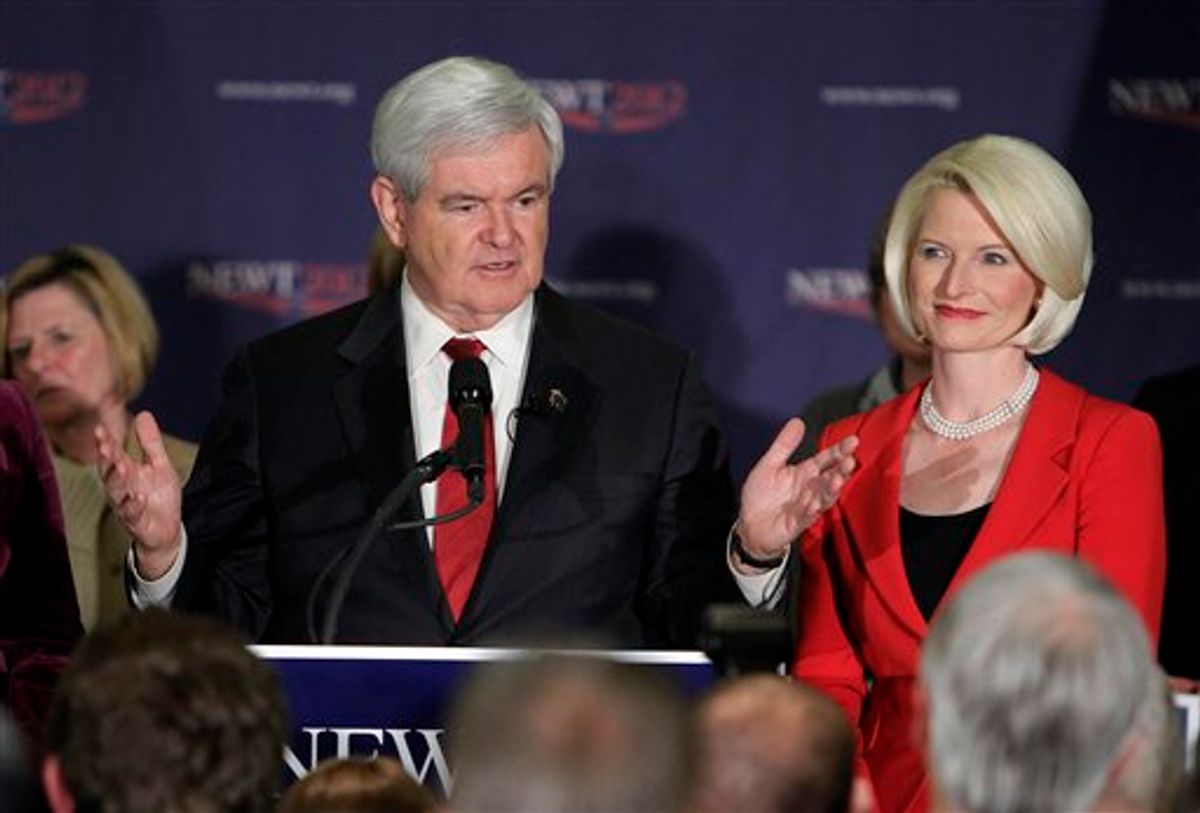 There are many reasons why Newt Gingrich's poll numbers collapsed almost as soon as he surged to the front of the GOP pack, not the least of which is the considerable bad will that that exists toward him among influential Republicans who remember his tenure as House speaker. As he campaigned in South Carolina on Wednesday, Gingrich demonstrated another one: the fact that he actually embodies two of the traits that he's begging Republican voters to rebel against.

This happened when he was confronted by a voter who asked him to "lay off the corporatist versus the free market" rhetoric that he's been aiming at Mitt Romney, and Gingrich replied that "I agree with you."

"It's an impossible theme to talk about with Obama in the background," he explained. "Obama just makes it impossible to talk rationally in that area because he is so deeply into class warfare that automatically you get an echo effect which, as a Reagan Republican it frankly never occurred to me until it happened. So I agree with you entirely."

Not surprisingly, this was promptly reported as an admission by the GOP candidate that he'd erred in painting Romney as a corporate villain and that he was ready to back off his attacks on his opponent's venture capital past. That Gingrich might feel this way was certainly understandable; so far, his Romney assault has mainly enraged conservative opinion-leaders, who have used their platforms to brand the former House speaker an unprincipled opportunist and to accuse him of aiding Barack Obama and the Occupy Wall Street movement. But shortly thereafter, his campaign put out a statement insisting there'd been no backtracking whatsoever:

This issue at hand is neither about Bain Capital, private equity firms, nor about capitalism.  It is about Mitt Romney’s judgment and character.  It was Governor Romney’s decision to base his candidacy, in large part, on his background as a portfolio manager.  Thus, it is entirely legitimate to ask questions about whether he is accurately presenting how he conducted himself during that career.

So it looks like Gingrich -- and, perhaps more important, the well-endowed Super PAC that's aligned with him -- will not be letting up on Romney's Bain Capital years after all. But that doesn't necessarily mean this was all simple misunderstanding, because it's actually the second time Gingrich has publicly waffled on the wisdom of his Romney attacks.

The first instance came in mid-December, when Gingrich expressed regret to Sean Hannity over his claim that Romney had made his money by "bankrupting companies and laying off employees" and vowed to run a "relentlessly positive" campaign from that point forward. Weeks later, though, after his poll numbers had crashed and Romney had reasserted himself as the GOP favorite, Gingrich went back on this pledge and again made Bain an issue.

This is why it was so easy to believe that he was changing course yet again when he opened his mouth on Wednesday. This campaign, and his entire political career for that matter, is filled with exhibitions of Gingrich's comical knack for switching back and forth between sweeping, absolute claims and commitments while expressing contempt for anyone who suggests he's being inconsistent.

The classic example involves the multiple highly specific and confident positions he took on Libya -- demanding , for instance, that President Obama establish a no-fly zone, then calling intervention a mistake when one actually was set up. There was also his journey from calling Paul Ryan's Medicare plan a bad idea and "right-wing social engineering" to claiming that anyone who quoted him saying so was guilty of lying. It's the story of his career: At the height of the 1998 midterm campaign, he railed against the media for focusing obsessively on the Monica Lewinsky scandal -- this after he'd dramatically vowed earlier in the year to raise the subject himself whenever he got the chance.

Gingrich's last-ditch effort in South Carolina depends on exploiting two of Romney's chief intraparty vulnerabilities: his penchant for opportunistic flip-flops and his history of ideological apostasies. In Gingrich's telling, he's a "Reagan conservative" who represents the party base's last chance to avoid nominating a "timid Massachusetts moderate." But he can't seem to keep himself from engaging in over-the-top flip-floppery of his own, a reality that his Wednesday comments are a reminder of. And the subject he's vacillating on -- whether to attack Romney over Bain -- actually gives Romney an opportunity to position himself to Gingrich's right.

In other words, Gingrich is now running in South Carolina as pretty much the exact candidate he came to the state to beat.