The real media sin is not uncritical printing of false claims: it's extending that license only to the powerful 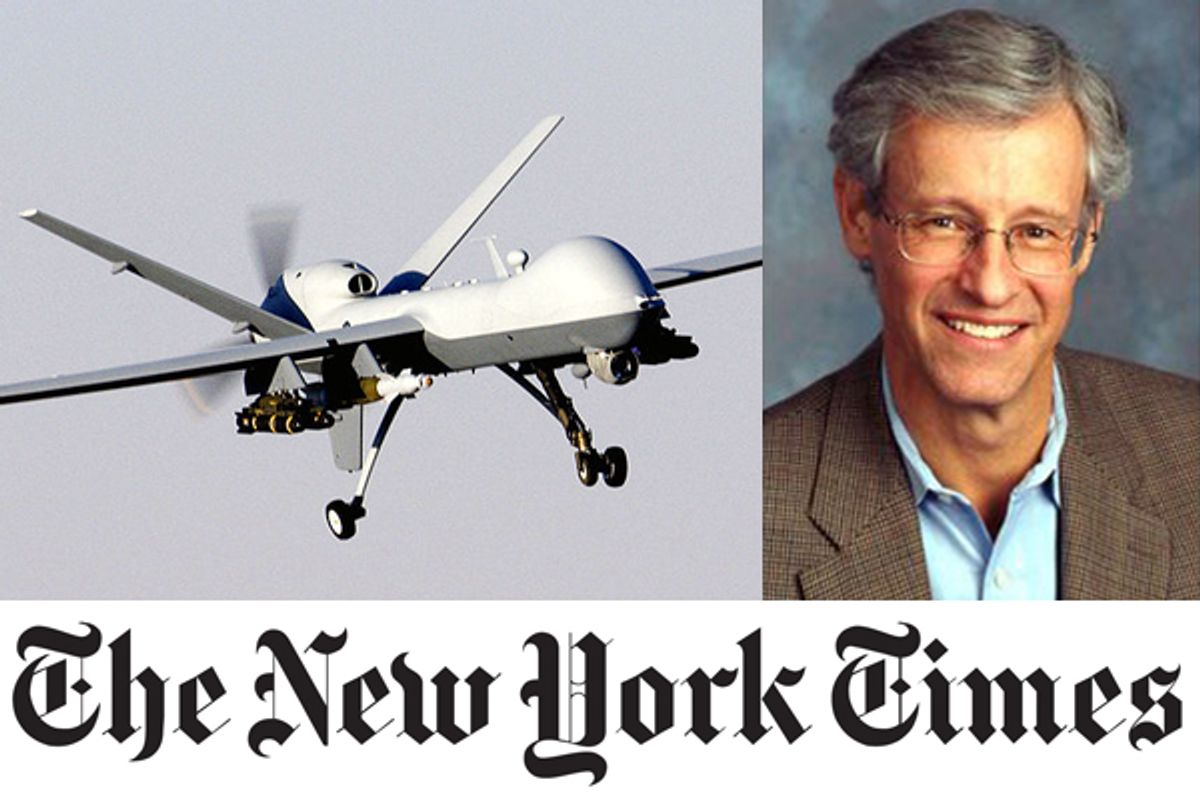 The New York Times' Public Editor Arthur Brisbane unwittingly sparked an intense and likely enduring controversy yesterday when he pondered -- as though it were some agonizing, complex dilemma -- whether news reporters "should challenge 'facts' that are asserted by newsmakers they write about." That's basically the equivalent of pondering in a medical journal whether doctors should treat diseases, or asking in a law review article whether lawyers should defend the legal interests of their clients, etc.: reporting facts that conflict with public claims (what Brisbane tellingly demeaned as being "truth vigilantes") is one of the defining functions of journalism, at least in theory. Subsequent attempts to explain what he meant, along with a response from the NYT's Executive Editor, Jill Abramson, will only add fuel to the fire.

Jay Rosen and Clay Shirky both have excellent analyses of the Brisbane controversy -- which, as they point out, sparked such intense reaction because it captured and inflamed long-standing anger toward media outlets for mindlessly amplifying statements without examining whether they're true. As Stephen Colbert put it in his still-extraordinary 2006 speech at the White House Correspondents' Dinner: "But, listen, let's review the rules. Here's how it works. The President makes decisions. He's the decider. The press secretary announces those decisions, and you people of the press type those decisions down. Make, announce, type. Just put 'em through a spell check and go home." While reporters typically react with fury over the suggestion that they are stenographers, Brisbane was essentially posting that this is all they are, and then earnestly wondering aloud whether they should be anything more than that, as though it was some sort of exotic or edgy suggestion.

That most reporters faithfully follow the stenographer model -- uncritically writing down what people say and then leaving it at that -- is so obvious that it's hardly worth the effort to demonstrate it. There are important exceptions to this practice even at the most establishment media outlets, where diligent and intrepid investigative journalism exposes the secret corruption of the most powerful. But by and large, most establishment news coverage consists of announcing that someone or other has made some claim, then (at most) adding that someone else has made a conflicting claim, and then walking away. This isn't merely the practice of journalists; rather, as Rosen points out, it's virtually their religion. They simply do not believe that reporting facts is what they should be doing. Recall David Gregory's impassioned defense of the media's behavior in the lead-up to the Iraq War, when he rejected complaints that journalists failed to document falsehoods from Bush officials because "it’s not our role" and then sneered that only an ideologue would want them to do so (shortly thereafter, NBC named Gregory the new host of Meet the Press).

Literally every day, one finds major news stories that consist of little more than the uncritical conveying of official claims, often protected by journalists not only from critical scrutiny but -- thanks to the shield of anonymity they subserviently extend -- from all forms of accountability. Just to take one highly illustrative example from last week, the NYT published an article by Eric Schmitt based almost entirely on the assertions of anonymous officials, announcing that "a nearly two-month lull in American drone strikes in Pakistan has helped embolden Al Qaeda and several Pakistani militant factions to regroup, increase attacks against Pakistani security forces and threaten intensified strikes against allied forces in Afghanistan." No criticisms of drone attacks were included. Three days later, the U.S. resumed drone attacks, after which the same Eric Schmitt immediately ran to inform us, citing Reuters, that the drone strike killed "at least three militants" (as always, "militant" in American media discourse means: any person who dies when an American missile shot from a drone detonates).

Obviously, U.S. officials knew that drones were about to resume and fed Schmitt a Press Release in advance to justify it -- the lack of drone attacks is helping Al Qaeda and the Taliban regroup!!! -- and he then printed it uncritically (complete with the Press Release headline they wanted: Lull in U.S. Drone Strikes Aids Pakistan Militants); he then shielded his Press-Release-disseminating friends with anonymity. That is stenography "journalism" in its purest and most degraded form, and it shapes countless news stories of great significance (subservient, anonymity-granting, uncritical stenography is also found with increasing frequency in self-proclaimed MSM-busting New Media).

Every day one can find prominent news articles that are shaped entirely by the following template: A, B and C are true, say anonymous American officials; government claims drive the entire article and shape its narrative, with "officials say" tacked on as an afterthought, an unnoticed formality. In the realm of reporting on the government, this practice encourages and enables government lies; in the realm of political reporting, as Greg Sargent's examples show, it incentivizes candidates to lie freely.

But there is one important caveat that needs to be added here. This stenographic treatment by journalists -- of simply amplifying what someone claims without any skepticism or examination -- is not available to everyone. Only those who wield power within America's political and financial systems are entitled to receive this treatment. For everyone else -- those who are viewed as ordinary, marginalized, or scorned by America's political establishment -- the exact opposite rules apply: their statements are subjected to extreme levels of skepticism in those rare instances when they're heard at all.

Look at one illustrative example from yesterday. An AP photo accompanied the column I wrote yesterday on the murder of yet another Iranian scientist. The photograph showed the scientist, who was 32 years old at the time he died, posing with his young son. I had seen this photograph elsewhere and, knowing that Salon can use AP's photos, requested that Salon editors use it as the art for my story. But look at the caption that AP wrote to accompany the photograph:

Extreme skepticism oozes from every pore of that photo caption. AP refuses to accept that this scientist was killed; they even refuse to accept that this is an actual photograph of the scientist in question and that the photograph shows him with his son. Instead, AP wants you to know that even these pedestrian assertions are nothing more than unverified "claims" from Iran's state-controlled media and thus cannot and must not be assumed to be true.

I have no problem with that type of skepticism. To the contrary, it's warranted; as I.F. Stone famously taught, the only thing journalism students need to know is that "all governments lie." But the point is that one would never, ever see this level of overt skepticism from AP or any other establishment media outlet when it comes to claims from the U.S. Government. Instead, those claims are treated as presumptively true; in fact, they're so trustworthy that entire news stories can be written that do little more than adopt those government claims as the dominant narrative ("The drones would be cleared to fire on a senior militant leader if there was credible intelligence and minimal risk to civilians, American officials said").

Stenographic treatment is a license extended only the most powerful. As Atrios put it yesterday: "It isn't as if random crazy people on the street are granted 'they said it so that's good enough to print' privileges by our elite newspapers. Powerful connected people are." The most damaging sin of this stenographic model isn't laziness -- the failure to subject false statements to critical, investigative scrutiny -- although that is part of it. The most damaging sin is that it's propagandistic: it converts official assertions and claims from the most powerful into Truth, even when those assertions and claims are baseless or false. This stenographic model is the primary means by which media outlets turn themselves into eager spokespeople and servants for the most powerful factions: the very opposite of the function they claim, with increasing absurdity, to perform.

Speaking of stenographic journalism, consider this amazing fact. After the NYT published its infamous Editor's Note in 2004 apologizing for (some of) its stenographic coverage of pre-Iraq-war claims (information from anonymous sources "was insufficiently qualified or allowed to stand unchallenged," the paper confessed), its top editors repeatedly vowed greater levels of skepticism in the future, especially when it came to government claims about America's enemies. Said Bill Keller in 2007: "We don’t have to tell the reporters to be as skeptical as possible. W.M.D. restored a level of skepticism."

But look at what has happened with the paper's subsequent coverage of Iraq and Iran. Amazingly, three consecutive Public Editors have each separately condemned the newspaper for baseless reporting that either relied blindly on government claims or over-stated external threats. In February, 2007, Byron Calame gently though clearly criticized an article by Michael Gordon about Iranian actions in Iraq that relied too much on government claims without qualification. Thereafter, Clark Hoyt slammed the paper for mindlessly adopting Bush claims about Al Qaeda in Iraq. And earlier this week, Brisbane admonished the paper for over-stating the IAEA's assessment of Iran's pursuit of nuclear weapons.

Notice that each of these episodes entail the NYT's hyping government claims and exaggerating the threats which the U.S. government is attempting to highlight. At least to my knowledge, none of the paper's Public Editors has ever criticized the NYT for excessive skepticism of government claims or under-stating such threats. And that's the point: it isn't merely that all of this is just bad or sloppy journalistic behavior. It's more directed, more purposeful than that: it all goes in one direction (bolstering official claims), all benefits one faction (those who wield power), and all has one outcome (amplifying elite assertions while shielding them from criticial scrutiny).