Romney and the pathology of Bain 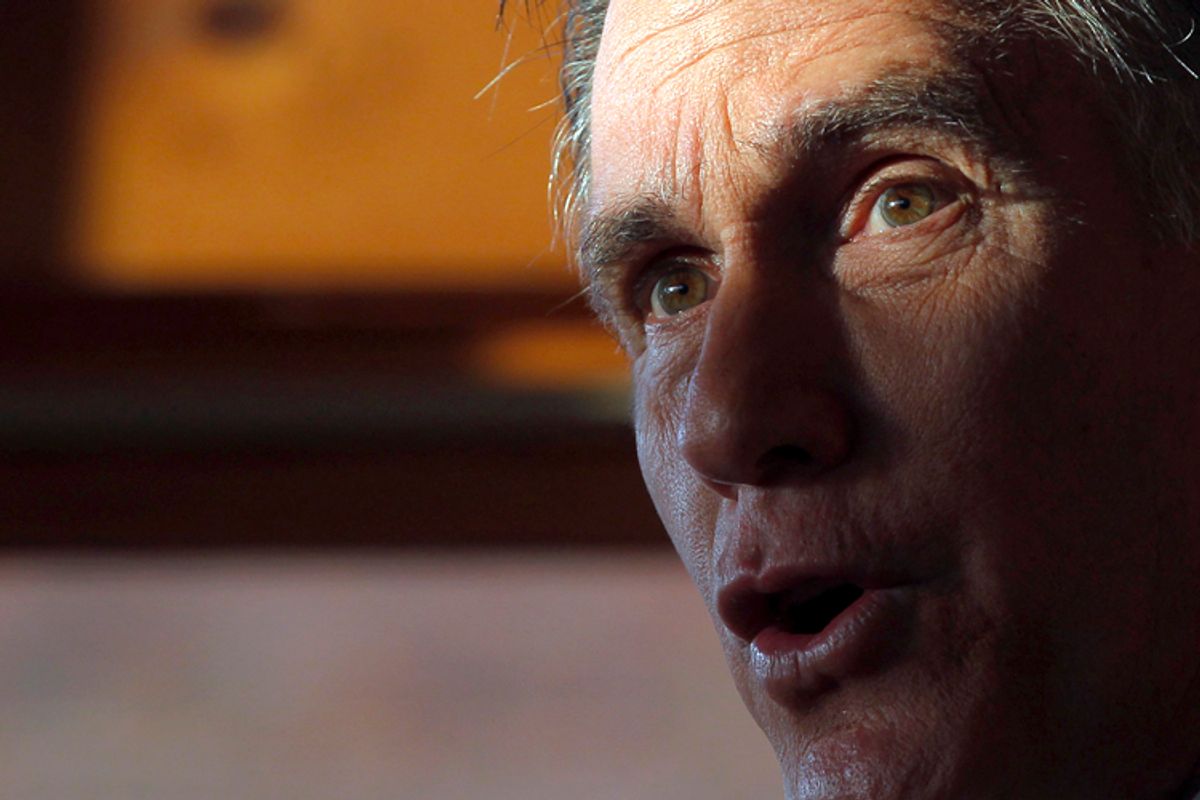 No one can make Mitt Romney look good — not even a crazy man with a program that’s slightly to the right of Juan Peron.  Ron Paul, currently the second most popular Republican presidential candidate, may be nuts but Romney is arguably a lot worse: the standard-bearer of the worst aspects of borderline sociopathic, bottom-feeding American capitalism.

I don't mean to call people names.  I speak as a bona fide expert on these subject, having covered business and written a book about a sociopath and having known many professionally through the years. I’m merely trying to provide a dispassionate analysis of Romney’s life and career, especially (but not exclusively) his record as a job-destroying corporate warrior at the Bain Capital buyout firm.

Romney’s tenure at Bain, which he ran from 1984 to 1999, is currently being raked over the coals in the media and in a TV spot paid for by the stunningly hypocritical Newt Gingrich, but I’m not seeing much about what this says about him as a human being.

Here’s one of the better brief digests of Romney as a corporate job-destroyer, written by Josh Kosman, who wrote an excellent book in 2010 on the buyout industry called "The Buyout of America: How Private Equity Is Destroying Jobs and Killing the American Economy.” This book is required reading for anybody who wants to understand what Romney did for a living at Bain. He is the living embodiment of how the “job creator” Republican meme is grotesquely misleading, if not an outright lie.

You can’t really blame him. It was his job. Or as Don Vito Corleone once put it, it was “strictly business.” Romney was taught at Harvard Business School that the purpose of a corporation is not to “create jobs” but to create profits for its owners by, among other things, keeping the cost of labor at an absolute minimum. Job creation, if any, is incidental and entirely expendable, sort of the way oil-drilling rigs burn off natural gas. If profits are to be enhanced by job destruction, so much the better.

After all, jobs sometimes mean unions, to be fought at any cost, and benefits, especially medical benefits, that are a drain on corporate profits. Jobs, in other words, are a pain in the butt. A corporation’s only real purpose is to enrich its owners, who are either a small group of suits (as at Romney’s Bain Capital) or thousands of shareholders, by keeping the labor force neat and trim and nonunion.

Buyout firms embody this job-destruction principle to the max. They are almost a self-parody, which explains why fictional moguls like Gordon Gekko tend to be buyout guys. They are the “barbarians at the gate.”  Their purpose is to leverage the companies they buy to the hilt, so as to extract the maximum profit. Bain was notorious for doing so in a manner that was guaranteed to destroy jobs. Romney and his partners walked away with profits taxed at subpar capital-gains rates, thanks to the “carried interest” deduction that is a sacred cow to private equity and hedge fund managers.

Here is a prospectus for investors seeking to invest in Bain funds. The firm's stated objective is to generate “an annual rate of return on invested capital in excess of the returns generated by conventional investments in the public equity market and private equity market.” Note what I’ve italicized. Bain wasn’t interested just in making money, but in generating super-duper returns, better than could be had from other vulture investors, such as could be obtained solely by squeezing companies to the max.

Kosman points out that Bain, which Romney co-founded,”bought companies and often increased short-term earnings so those businesses could then borrow enormous amounts of money. That borrowed money was used to pay Bain dividends. Then those businesses needed to maintain that high level of earnings to pay their debts.”  If they couldn’t do it, then the companies were tossed in the round file while Bain went on to other, more glorious profit-extraction opportunities. They were the corporate equivalent of aliens in sci-fi movies who would roam the galaxy, seeking inhabited planets they could suck dry of natural resources.

A good example of that policy in action came when Bain and Goldman Sachs took a controlling interest in Baxter International’s medical testing division, which was spun out as “Dade Behring.” Bain slashed the company’s research and development spending, and used the savings to borrow $421 million. “Dade then turned around and used $365 million from the loan to buy shares from its owners, giving them a 4.3 times return on their investment,” Kosman recounts. Dade Behring filed for bankruptcy in 2002.

That’s not an isolated case. The Wall Street Journal examined 77 Bain deals during Romney’s tenure and found that “22% either filed for bankruptcy reorganization or closed their doors by the end of the eighth year after Bain first invested, sometimes with substantial job losses. An additional 8% ran into so much trouble that all of the money Bain invested was lost.”

Among the companies acquired and plundered by Bain that eventually went bankrupt were Stage Stores, American Pad & Paper, GS Industries and Details. The job slaughter at American Pad became a campaign issue when Romney ran against Ted Kennedy in 1994. Bain and its partners, including Romney, made a fortune on each of these companies. There were other Bain companies that did nicely — Romney likes to point to Staples — but it's ludicrous to give Bain credit for Staples prospering after it recovered from its assault on the company. That’s like thanking a virus for not turning into pneumonia.

Romney sees absolutely nothing wrong in the trail of destruction that he left behind him, and in his victory speech Tuesday night he criticized his Republican opponents—hypocrites though they definitely were, but accurate hypocrites—for putting “free enterprise on trial.” That’s typical. A sociopath is a person who “lacks a sense of moral responsibility or social conscience.” Listening to Romney Tuesday night, I was reminded of another scene from "The Godfather," Michael Corleone’s line from "Godfather II": “Senator, we are all part of the same hypocrisy.” It’s hard to see Bain Capital’s Romney as being any less sociopathic than the Harlem numbers banker who, while breaking the law, at least gives employment to large numbers of indigent people. The buyout business is perfectly legal, even celebrated by free-market types as an example of the kind of capitalistic enterprise that built this nation and created jobs.

Still, you have to give Romney some credit. With one possible exception, none of the Bain-ravaged companies required public assistance. Still, there’s food for thought in a recent paper published in the Journal of Business Ethics (h/t to William Cohan at Bloomberg), in which a British academic named Clyde R. Boddy maintains that an influx of corporate psychopaths paved the way for the 2008 financial crisis.

Boddy defines psychopaths as “people who, perhaps due to physical factors to do with abnormal brain connectivity and chemistry,” lack a “conscience, have few emotions and display an inability to have any feelings, sympathy or empathy for other people.” One does not have to probe Romney’s life too deeply to find evidence of that.  His lack of consistent political principles, his storied flip-flopping, are other indications of a man who doesn’t really believe anything, who has no real scruples, no aim in life other than to succeed, first to acquire wealth and now to acquire power.

Boddy says that  corporate psychopaths “present themselves as glibly unbothered by the chaos around them, unconcerned about those who have lost their jobs, savings and investments, and as lacking any regrets about what they have done ... They are happy to walk away from the economic disaster that they have managed to bring about, with huge payoffs and with new roles advising governments how to prevent such economic disasters.”

That description follows Romney with reasonable fidelity, but I’m still hesitant to push the analysis too far. And even if he fit the parameters Boddy sets forth, I’m not sure it would amount to much. The American people historically aren’t very fussy about the inner demons of the persons they elect to office, and proved that in 1972 when they turned out in vast numbers to re-elect Richard Nixon. Romney stands a reasonable chance of winning the presidency in 2012, and with a program that makes Nixon look like a big-government bleeding heart by comparison.