Why Barbie should go bald

A campaign for a chemo-themed doll catches fire 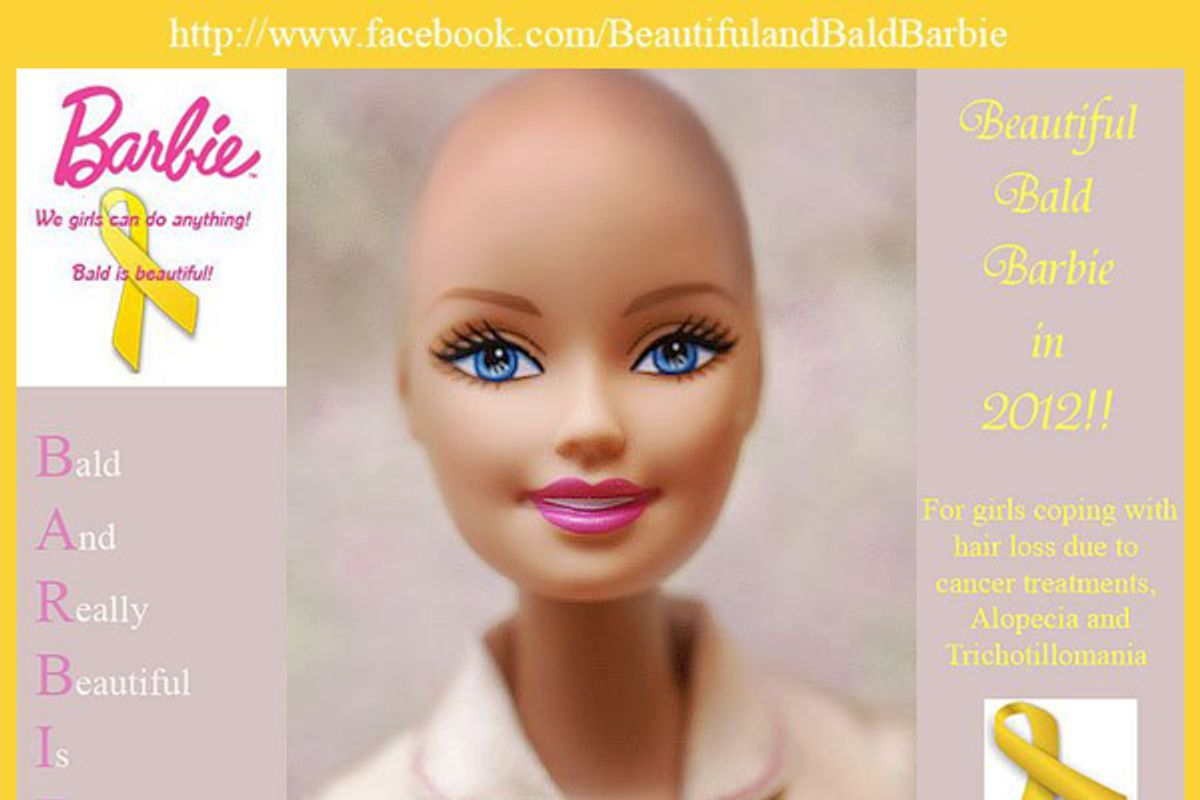 She's the perfect woman. Million-dollar smile, massive gazongas, an insane resume that includes stints as an astronaut and a mermaid. Even when she goes a little edgy, she's still flawless. And it's that perfection that's made her, for over 50 years, an idol to little girls everywhere. So what if  Barbie was to get a makeover unlike any of the thousands she's had in the past? What if were Barbie were to lose her iconic glossy tresses?

What began as a small Facebook campaign in December to urge Mattel to create a Bald and Beautiful Barbie has, in recent days, blossomed in to a full-on groundswell. It's attracted international media attention, and the Facebook group is closing in on 90,000 members. Think of the possiblities for cute hats!

The concept came from a group of parents whose children had hair loss from cancer treatment. Rebecca Sypin, whose daughter has been in treatment for leukemia the past two years, told MSNBC this week, "We would go to the store and people would stare or kids would ask her why she's bald. It's not something they're used to seeing. We think [a bald Barbie] would be therapeutic and I think it would help baldness become more quote unquote normal. It would be seen. It wouldn't be this odd thing that people don't have hair." There are already a small number of dolls  targeted for kids who are facing hair loss – either their own or a parents. But they're generally softer, educational props aimed at younger children.  No one with the cultural wallop of Barbie has ever ventured into the scary terrain of baldness -- and the array of diseases that it implies.

What neither the Facebook campaign nor Mattel have yet to address is the way that Barbie has long been an icon to adults as well as children. Any woman under the age of 60 grew up with her. And Mattel's reliable marketing to grownups proves that you don't have to play in the Dream House to have a soft spot for the plastic lady, despite her impossible-to-achieve lifestyle and physique. A bald Barbie wouldn't just be a unique role model for little girls; I guarantee she'd be a runaway hit with women dealing with hair loss and the identity issues it creates -- and it'd be a boon to their daughters. I know a harrowing number of women with cancer, and not a one doesn't have a very complicated relationship with the issues of baldness, wigs, and femininity. To be both "bald and beautiful" is a powerful concept, one that ought to resonate far beyond childhood.

Though Mattel initially responded to the campaign with a form letter that it "doesn't accept ideas from outside sources," the company expanded in a more public relations friendly statement Thursday that "We are honored that Jane Bingham and Beckie Sypin believe that Barbie could be the face of such an important cause. Mattel appreciates and respects the passion that has been built up for the request for a bald Barbie doll… We are constantly exploring new and different dolls to be added to our line."

Yet it's understandable why Mattel might be reluctant to roll out a Barbie whose head is as smooth as the rest of her body. Accepting an outside concept might easily put the company in the vulnerable position of having to pay someone for it. But there's perhaps another reason. Barbie does a hell of lot – she has been a cashier and a U.N. ambassador in her time – but she doesn’t walk with her heels on the ground and she doesn't get cancer. She may have had a friend in a wheelchair, but Miss Thing herself will likely forever remain impervious to disease. If the consumer demand is there, however, she may yet acquire a buddy with a jaunty, Pucci-inspired scarf. And that's a good start.

The fact that a loving group of parents had the notion to look at the doll that generations of females have exhausted themselves trying to emulate and asked aloud how she could become a figure of hope and strength is impressive. It's a testament to her power as a standard bearer. Most girls, whatever their health or their hair, don't see very much of themselves in their Barbies. What they do see, however, is a girl who is popular, successful and smiling. The enduring appeal of Barbie isn't just her tiny waist and fabulous accessories. It's that, bless her nonexistent heart, she is happy. Where there's happiness there's hope. And where there's hope there's healing. A bald Barbie wouldn't cure cancer. But a doll that represents possibility, to both children and adults facing the pain of disease and the day-to-day ordeal of looking different, would be so much more than beautiful. She'd be a beacon of joy. She'd be perfect.