Afghanistan: "The tide of war is receding" 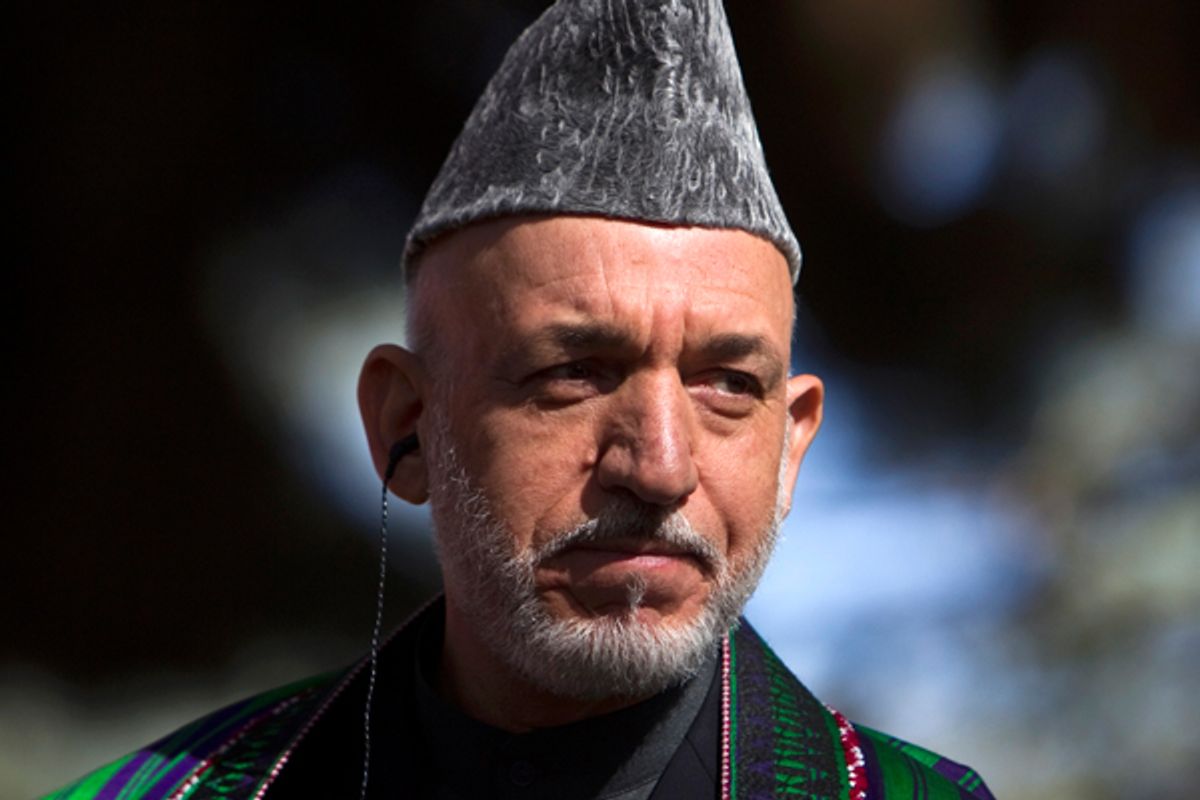 Glenn Greenwald wrote recently about how reporter Michael Hastings’ new book on Afghanistan exposes some of the pathologies of national security journalism as it is commonly practiced today. But the new book, “The Operators: The Wild and Terrifying Inside Story of America’s War in Afghanistan,” also contains lots of interesting reporting on the recent history of the war, particularly the period between 2009 and 2010 when Gen. Stanley McChrystal was in charge. McChrystal, of course, resigned in June 2010 after the publication of a Rolling Stone article by Hastings that contained sundry damaging material, including quotes from McChrystal aides mocking the White House.

I spoke to Hastings about the American relationship with Afghan President Hamid Karzai, the effort to arm Afghan militias around the country, and recent reports of negotiations with the Taliban.

There’s a section in the book where you quote a German expert questioning McChrystal on why a 45-minute talk he gave on Afghanistan mentioned al-Qaida only once. From all the time you spent with the military brass, what’s your sense of how they conceive of what this war is about?

That’s the big lie: that what we’re doing in Afghanistan makes us safer from al-Qaida. That’s the rub. Besides that McChrystal talk in which he didn’t discuss al-Qaida, there are a couple other telling moments. After Sen. Lindsey Graham was briefed on the strategy that McChrsytal wanted, he was terrified that they weren’t mentioning al-Qaida enough. He encouraged them to mention it more and keep hammering  away on it. Then when Petraeus took over the war in summer 2010, military sources told me that in his morning briefings no one would ever mention al-Qaida, or at least very rarely. There’s a famous number that Gen. Jones, the former national security adviser to Obama, put out, which is that there are less than 100 al-Qaida members in Afghanistan.

So the U.S. military leadership is conceiving of this primarily as a fight against the Taliban?

Yes. Counterinsurgency is allegedly concerned with setting up a stable government in Afghanistan. It’s nation building. It’s not fighting terrorists.

On that point, you go into some colorful details about the American relationship with President Hamid Karzai. What did you find in your reporting?

Well, we’ve had U.S. officials come out and say that Karzai uses drugs, and that he is possibly manic depressive. The American ambassador to Afghanistan put that out there. We also know that Karzai had no interest in counterinsurgency. And McChrystal’s people referred to Karzai as “the man in the funny hat” and they called his hat “the Gray Wolf’s vagina.” This is the level of respect that Team McChrystal was showing to our great Afghan friend and ally. Our strategy is based on having this strong, credible partner, but at the same time Karzai is being undermined by everything American officials working with him say. So how does that work? It doesn’t.

It became very explicit that what McChrystal was trying to do was to make Karzai a real commander in chief.  But the idea that the mission of the United States military is to transform an Afghan politician into some kind of Winston Churchill-like figure is laughable.

The Afghan Local Police program has been getting a lot of attention as a key part of what the U.S. is doing now. Can you first explain what this program is?

The military describes it as like a neighborhood watch program for Afghanistan. Of course, it’s a neighborhood watch program where our Special Forces gives everyone in the neighborhood an AK-47. The idea is that the each local community will set up their own small militia; the rationale is that these local groups of armed men will be able to defeat the Taliban in a decentralized way. Many Afghans fear that it’s just giving guns and training to warlords. Of course, funneling millions of dollars of weapons into the hands of people that want to be local militia commanders is not necessarily a recipe for stability – certainly not in the short term. In the long term, it could lead to stability, or it could lead to a more intensive civil war.

You delve into the case of Abdul Razzik. Can you explain who he is and what he represents in terms of what the U.S. is doing?

Razzik is a young Afghan commander who has become our up and coming warlord star in southern Afghanistan. The Americans were for a while split on him because he does have various credible human rights complaints against him and he does have connections to the drug trade. But at the end of the day, the calculation that was made was that Razzik picks up the phone. That means, when the military wants something done, Razzik is a can-do guy. He is not afraid to knock heads or detain the Taliban and torture them. So any concerns or lip service toward human rights quickly become trumped by trying to get some local stability.

There’s talk now, including from Hillary Clinton, about some kind of negotiations – or the possibility of negotiations -- with the Taliban. There have been many rounds of these sorts of reports. What do you make of this talk based on your experience in Afghanistan?

I think negotiations are the only way out and we’ve known this for years. Who are the players in these negotiations? The ISI and Pakistan, the Taliban, Karzai, and these other warlords all have to get on the same page. So the question is, what is the United States’ role? We’ve struggled to figure it out. One of the reasons is that so few of our resources have been devoted to a diplomatic solution, despite the lip service to the line that “There’s no way to kill your way out of this fight.” This will be a lengthy process, and the scandal is that we’re really only now starting it seriously.

At the end of the book you say that you think the bin Laden killing marks the beginning of the end of the war. But Gen. John Allen, the head of the war now, recently said that U.S. troops could be in the country beyond 2014. What’s your assessment about where this is going?

It’s amazing to see Gen. Allen and the Pentagon try to hold on and keep this war going on as long as they can. I’ve gotten flack for this, but I believe President Obama when he says the tide of war is receding. I think that’s a very significant statement. I certainly don’t see us reescalating in Afghanistan. The question is, how long will it take for them to wind the war down? One thing to keep in mind is that the government there is going to be so addicted to the American tax dollars and training, they’re not going to be able to kick us out like the Iraqis did. There’s also the focus on counterterrorism operations in Pakistan. So I think we’re going to see a robust Special Forces and training presence in Afghanistan for years to come.

But as long as there are not 200 or 300 or 400 American soldiers dying every year and we’re spending $20 billion per year instead of $120 billion per year, experience seems to show that the American public will tolerate that kind of long-term presence.