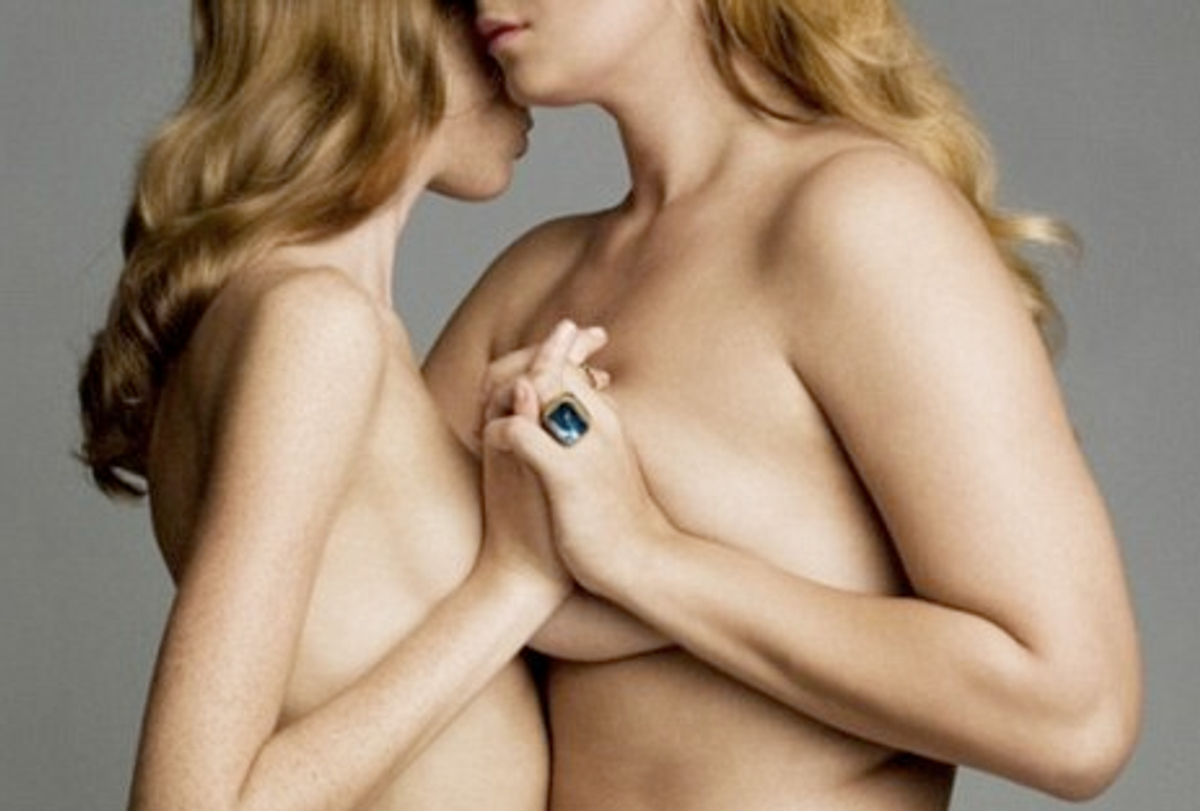 Nothing like the sight of two beautiful naked women in an embrace to get attention. And the message is powerful. In a pictorial for Plus Model magazine, the lushly gorgeous Katya Zharkova entwines with a far thinner female whose face is obscured. The caption reads, "Most runway models meet the body mass index physical criteria for anorexia."

There's more. As the magazine asks, "What's wrong with our bodies anyway?" it flaunts some sobering statistics. "Twenty years ago the average fashion model weighed 8 percent less than the average woman. Today she weighs 23 percent less," and "Ten years ago, plus sized models averaged between size 12 and 18. Today, the majority of plus-sized models on the agency boards are between a 6 and 14." With figures like that -- both the numeric and female kind -- it's not surprising the story became an instant meme.

Not to get all New York Times-y here, but it'd be nice if the magazine editors did a little journalism and actually cited the source for their statistics. You can find the same statements all over the Internet, dating back years -- including the site the magazine's editors obtained it from, the eating disorders program Rader. But Rader doesn't reveal where it found them. And that's unfortunate, as is the ploy of using vaguely Sapphic imagery to make a point, because the problem the Plus spread highlights is real and serious.

We are in the throes of a certifiable healthcare crisis in this country over our weight. One-third of us are now obese. And though a small percentage of us have eating disorders, there can be no denying that the standards for beauty have drastically changed over the past several years. As Americans have been getting bigger, our lingerie models have been going on wackadoo "no solids" diets to attain runway perfection. Thanks to the magic of photo editing technology, already slender models can be whittled down to near nonexistence. If it seems like resembling a model is getting harder and harder, consider that the lithe woman you see enticing you to purchase underpants isn't a real woman at all but a computer-generated hottie. Forget about models dwindling down to eating-disorder sizes -- they're disappearing altogether.

When you think about the ways in which the fashion and publishing industries peddle increasingly impossible ideals of feminine perfection, the clumsy execution of the Plus Model magazine message doesn't seem so bad.  It'd be more convincing without the rehashing of dubious statistics, and it's important to remember that for all the talk about "our" bodies, Plus is still a magazine about models. Plus-size Katya Zharkova is still far more fit, beautiful and healthy than an enormous number of American women. But the eye-opening spread is nonetheless a powerful start in trying to bridge the ever-widening gap between who we really are and how we are depicted in magazines and the media. You might even call it a big deal.