I hoped my acting gig would be a history lesson for the Chinese. But it was a lesson for me in government control 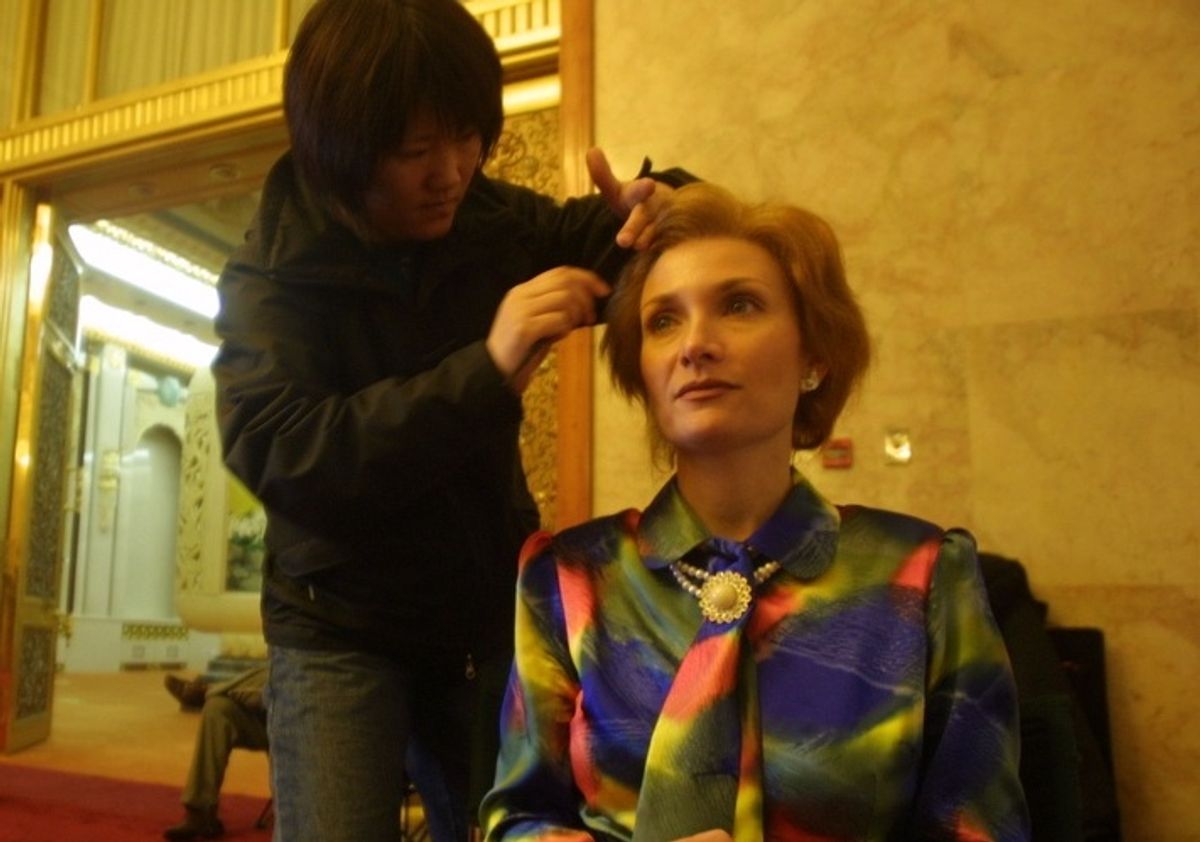 I’m teetering in ill-fitting high heels at the top of a flight of cement steps. A stiff wind kicks up, threatening to blow the red wig off my head. Below me, I see a bewildered film crew and its director. He is shouting: “Take a step!”

Behind them, Tiananmen Square stretches out in all directions. I can see Mao’s tomb and swirling crowds of tourists and police and the imposing entrance to Beijing’s ancient Forbidden City. At my back is China’s imposing Great Hall of the People, where the fate of a billion people is routinely determined by a handful of aging men.

Like Meryl Streep, I am playing Margaret Thatcher. But this is no Hollywood production. This is a Chinese government TV movie showcasing the accomplishments of Deng Xiaoping, the country’s late paramount leader.

Again, the director yells. My translator barks out his message: “Take a step forward! Fall down the steps!”

No stunt coordinator, no safe place to land off camera. No net. Just 50 feet of steep cement. I may break my neck doing this, I tell the translator. She shoots me a blank stare. The camera rolls. And the Iron Lady falls.

For weeks, we’d been shooting pivotal scenes that chronicled Thatcher’s meeting with Deng in 1982 to negotiate the handover of Hong Kong in 1997, at that point still 15 years away. This tiny, awkward moment — a re-creation of Thatcher’s brief stumble while walking down these very steps after that meeting with Deng in the Great Hall — seemed more important to them than any of her powerful speeches.

They needed the villain to be brought low.

They saw her not as a real person but as a cartoon bad guy – the embodiment of an empire that, in their eyes, had taken a piece of China more than a century before and held the Middle Kingdom hostage when it tried to get the island back.

This was, of course, a biopic about their man – Deng Xiaoping, the “little bottle,” who emerged from Mao’s shadow and persecution to set China down the road of “reform and opening up” – its reengagement with the world.

How do you portray a world leader when the people who hired you see her as nothing more than a parody? That was my acting challenge as I, with almost no Mandarin to my credit, tried to negotiate the politics of the Chinese movie industry – and of China itself.

My challenge became clear on the first day of filming.

As I slumped in a makeup chair at 5 a.m. one morning in Shanghai, a young woman presented me with a single page photocopied from a textbook. It included one small news photo of Thatcher beside Deng during their negotiations. This grainy, black-and-white image was all they had to go on as they transformed my 35-year-old blonde self into a 57-year-old, red-headed British politician.

The half-dozen crewmembers buzzing around me treated the page like a rare document. They assumed I’d never seen a picture of the woman who forced Deng to negotiate for China’s “stolen property.” The makeup artists laughed uncomfortably when I asked if we could find more photos to work with, especially ones printed in color. They were shocked when I explained that, as a teenager, I’d seen countless photos and tons of video of Britain’s prime minister.

I told them all I knew about Thatcher’s face, hair and style of dress, hoping to fill in the creative blanks as they tried to transform me. They were skeptical that I could know she was married to a man named Denis or had children. They didn’t seem comfortable with the idea that any of this could be true, that she could possibly be someone’s mother.

We were documenting a piece of history. But with information so tightly controlled, there was no room for verisimilitude. China’s information blackout, which persists even in the age of Twitter, means their leaders can still be presented as unblemished, epic figures. And those who oppose them can be cast  as one-dimensional, Voldemortian bad guys.

A few weeks ago, a New York Times story quoted Phyllida Lloyd, the director of Streep’s new film, as saying she wanted to bring some subtlety to the world’s image of Thatcher. “In parts of England, now it’s a transgression even to consider her as a human being,” Lloyd said. “She’s that monster woman, the she-devil. For me the point of the film was to find the human side.”

That was exactly what I wanted – to add texture and depth to the grainy photocopied image I had been handed. Here was my chance to show a small cross-section of China that Margaret Thatcher was not a cartoon. She was a real, three-dimensional person.

Weeks later, I caught an early flight to the seaside city of Dalian. Thatcher had been invited to christen a Chinese ship there in 1982, so I stood in the shadow of an available stand-in – an Iranian tanker ship – to capture that photo-op moment.

It should have been a quick scene, but the morning came and went with nothing shot. For hours, the director idled in a black Mercedes while the crew smoked a lethal number of unfiltered cigarettes. We were getting nowhere. Much of the crew had begun to nap. Then we heard that the director had gone back to the hotel for lunch.

I was due back in Beijing in a few hours, so I found my translator and asked about making my flight. Not possible, she said; the director had decided I would stay for one night, or maybe two, in Dalian.

I cautiously pushed back, explaining that they’d booked me only for the day and I needed to get home to my newborn son in Beijing. The few crewmembers milling about fell silent. They’d already seen me ask to adjust my hair and makeup to look more like the real Maggie Thatcher. They’d seen me balk at falling headfirst down the stairs at the Great Hall. Now I was objecting yet again.

To many Chinese raised on bootleg DVDs, Americans are the spoiled 20-somethings of “Friends,” fretting over minor inconveniences while living lives of casual luxury. Did I seem just as spoiled for standing my ground in a culture where it’s not acceptable to tell your boss that anything is wrong?

I managed to get the scene shot and made it back to Beijing by midnight. I had just one scene left to shoot – a conversation between Thatcher and her entourage as they flew from London to Beijing. A jet that was once Mao’s private plane, now a museum piece, would double as Thatcher’s aircraft.

After three months of shooting, I was owed thousands of dollars. I’d been paid less than $100. An American actor friend who made his living in Chinese movies was blunt with me: If you shoot the final scene of a government film without the money already in your pocket, he said, they’ll never pay you anything.

As the red bouffant wig was glued onto my head one final time in a small building on an airstrip outside Beijing, I quietly reminded my translator that she’d been promising me further installments of my pay for several months but I’d gotten nothing. She looked away.

“You’ll be paid tomorrow,” she said. Then she quickly left the room.

Minutes later, as I boarded the plane, I asked her to tell the director that I couldn’t play this scene without being paid. He refused, so I refused to act.

“Paying you is impossible,” he said.

We all sat. Then we sat some more.

Finally, they began to realize I wasn’t bluffing. Furious, the director summoned an assistant, who appeared with a bulging black leather case. Unzipping it, he pulled out thick wads of Chinese currency and counted out the cash. With my pay sitting in my backpack under those same ill-fitting shoes I wore tumbling down the steps at the Great Hall, I played my last scene as Margaret Thatcher.

Between takes, no one spoke. I’d proven them right about me – and about her. I had forced their director to negotiate with me, just like the Iron Lady had forced Deng. Face had been lost. My hope that playing this role might humanize Thatcher for Chinese audiences had failed. I had fallen down those steps for nothing.

Nearly eight years after my film wrapped, access to information is still so tightly controlled in China that Barack Obama (and David Cameron, for those who know his name) may well seem like caricatures, too. How will this change for Chinese young people as technology makes their government’s control of information more difficult to enforce? Will they ever see that leaders aren’t angels or devils but, like all of us, something in between?

I hope Lloyd and Streep's film accomplishes that in a way that mine couldn't. Especially if, just like "Friends" and so many other Western TV shows and movies, it finds its way to the streets of China.

Melissa Rayworth, a writer based in Pittsburgh, lived in China from 2001 to 2004.