For this remarkable musician, even severe paranoid schizophrenia has not stood in the way of success 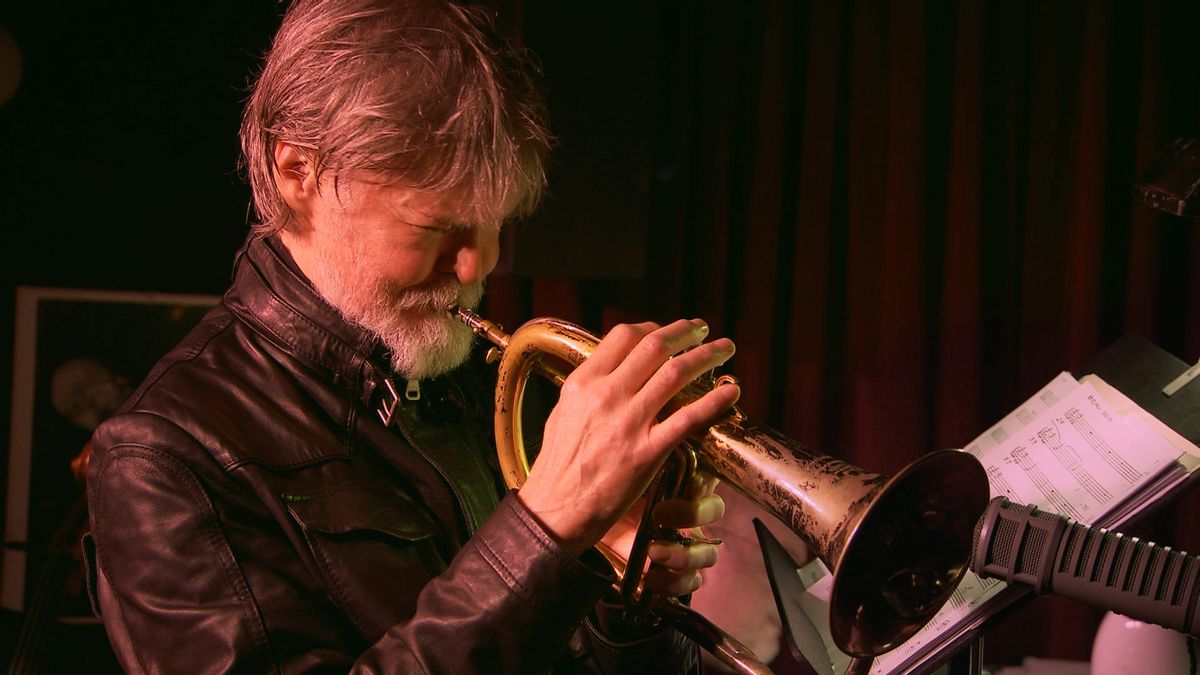 Tom Harrell is without question one of the most important jazz trumpet players now working. In 40 years of playing and composing cutting-edge jazz, he’s worked with everyone from Dizzy Gillespie to Carlos Santana.

And he does all this while managing an illness that would ordinarily prove debilitating: paranoid schizophrenia. Harrell’s condition is impossible to miss: he has a difficult time with social interactions, and is uncomfortable in public. But all of that melts away when he puts the horn to his lips.

SOUND TRACKS visits New York’s historic Village Vanguard for an exclusive look at Harrell’s latest adventurous project: his own arrangements of the works of Ravel and Debussy performed by his Chamber Ensemble. And after the show, Tom sits down for a rare, intimate conversation about his creative process.

The Passepied from Debussy’s Suite Bergamasque is probably one of the composer’s most recognizable tunes — but you might not recognize it here.  It’s been slowed down quite a bit and reharmonized — and right before this violin solo, it’s just shifted out of a Brazilian bossa-flavored blues. Violinist Meg Okura can play just about any style of music imaginable and has worked with artists from David Bowie to Ziggy Marley.  She told SOUND TRACKS that Tom’s music is incredibly challenging, and a total blast to play.

“Sainte,” Ravel’s first published composition, was originally written for a vocalist. Tom Harrell says he hears French composer Eric Satie in this piece, and tries to bring out Satie’s "saintly" quality in the music. But after starting out in a prayerful mood, this saint isn’t above getting a little funky.

For his Chamber Ensemble, Tom Harrell has augmented his core quintet of the past 10 years — Wayne Escofferey on saxophones, Danny Grissett on piano, Ugonna Okegwo on bass and Jonathan Blake on drums — with Dan Block (flute), Meg Okura (violin), Rubin Kodheli (cello) and Rale Micic (guitar). Tom switches off between trumpet and flugelhorn.

Our special thanks to the legendary Village Vanguard in New York for allowing us to film this performance.

It might seem strange that a composer as original as Tom Harrell would throw himself into the melodies of dead French impressionists, but he’s done far more than write “jazz” arrangements of Claude Debussy and Maurice Ravel.  While staying true to the melodic roots of the music, he’s effectively recomposed these pieces.

All of the musicians in Tom’s Chamber Ensemble — not just his core working group, but the "hired guns" brought in for these arrangements — clearly revere Tom. They love playing this music, even though — well, probably because — the jazz/classical fusion requires outsize talent and technical skill. We noticed that many of the performers set down their own personal digital recorders on their stands or at their feet to keep their own record of that night’s gig.

You will notice right away that Tom Harrell doesn’t look directly at SOUND TRACKS interviewer Arun Rath or the camera. Tom Harrell suffers from severe paranoid schizophrenia. Ordinary social interactions can be extremely difficult for him, so you can only imagine what a formal interview with lights, cameras, microphones and crew might feel like. We are grateful that he agreed to talk with us.

Tom’s diagnosis came in his early 20s. Before that, it was clear that he was intellectually gifted and a musical prodigy. As a teenager, he was already jamming with local professional groups.

You can use any superlative you like to describe Tom’s playing; he’s one of those rare figures who has actually extended the vocabulary of the jazz trumpet. Since hitting the scene in the early ‘70s, Tom has also established himself as one of jazz’s most important composers.

When he first sat down for SOUND TRACKS, Tom was clearly uncomfortable, but as we began to talk in detail about the music he had just played at the Village Vanguard, his responses became less halting. In the end we spoke for over an hour and a half — keep in mind this was well after 1:30 in the morning, following his second set that night — and his answers grew expansive and detailed, following unexpected connections much like one of his solos. You’ll notice how Tom gradually begins to look up more and more, even cracking jokes by the end.