When the Internet ate my son's manga magazine

Even the digital generation can sing the disappearing print publication blues 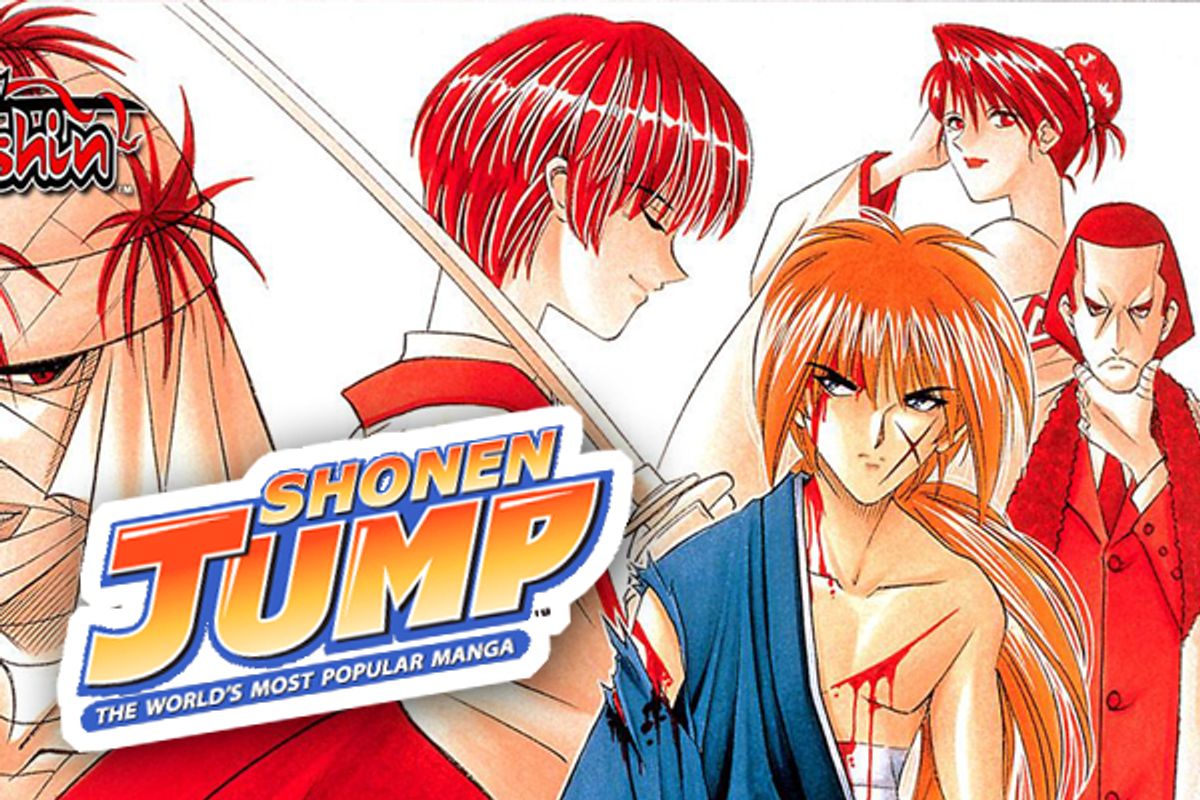 The card in the mail delivered sad news, disguised as progress. Shonen Jump magazine, a monthly digest of translated-into-English Japanese manga,, was ceasing print publication. Instead, subscribers were invited to sign up for Shonen Jump Alpha an online-only feed of new manga (the Japanese term for comic books). Shonen Jump Alpha, declared the card, would be a great bargain! There would be more manga content available than ever before, and new chapters in ongoing serials would be posted on a sprightly weekly basis.

My heart sank, however, because I knew someone who was going to be very disappointed. My son. Four years earlier, I'd given Eli a subscription to Shonen Jump as a birthday present. It was a gift that kept on giving. My son has unimpeachable bona fides as a member of the digital generation, swimming in a sea of texts and video games and YouTube channels as effortlessly and naturally as a dolphin in the South Pacific, but I'm not sure I ever saw him more happy or content or intently transfixed as he was on those days when a new Shonen Jump arrived. He would curl up on our living room couch with the gloriously fat magazine -- sometimes several hundred pages in length -- and devour the latest adventures of Naruto and One Piece and Bleach.

He kept all his back issues in his room, engulfing shelves and floor space. He read and reread them. He delighted in pointing out to me particularly absurd illustrations that demonstrated some oddball aspect of Japanese humor. I loved it. As a hardcore fanboy myself from way back, I deeply appreciate geeky enthusiasms -- I got almost as much pleasure watching him enjoy Shonen Jump as he did from reading them.

I emailed him the news (he was at his mom's house). The next morning, when he stopped by to pick up something on his way to school, I asked if he'd read my email. His shoulders slumped.

There wasn't quite enough time to explain, right then, the devastating impact of online distribution on the publishing world, a fact of post-Internet life that had massively affected his father's career as a journalist. I told him we'd talk about it later and watched him bike off to school. But at the same time, I mulled over an unexpected contradiction. My son is a member of the first generation for whom the Internet was a part of daily life from the cradle onward. To him, Wi-Fi is as normal as air itself, and the first answer to any question is a Google search. But just like any aging boomer eyeing a Kindle with suspicion and swearing undying allegiance to real books, he too was feeling a sense of loss and uncertainty, of destabilizing change.

As an inveterate early adopter of new technologies, I'd always assumed that the cultural resistance to new online distribution mediums was functionally generational. The older we are the less we like change. But for every grumbling codger who departs this mortal coil there's a new baby born who seems to know how to do a two-finger swipe on an iPhone touch screen right out of the womb. And yet here was a clear example of a bond with the printed word, the material object, that transcended generational divisions. Eli told me to he wanted me to sign him up for Shonen Jump Alpha, but he didn't seem enthused by the prospect of reading the latest installments of his favorite manga on the flat screen. If my 14-year-old could be transformed into a crotchety old codger, then maybe, just maybe, the culture really is losing something valuable as everything goes virtual.

I will admit that there are some ironies at play here. I write these words as someone who has earned his living writing for the Web since 1995. Just a few weeks ago, distressed at the appalling selection of books in the Atlanta airport, I borrowed my daughter's Kindle to download a science-fiction novel to get me through the six-hour flight back to California -- and I took a great deal of satisfaction in doing so. Take that, you crappy, lowest-common-denominator, mass market airport bookstore: The Internet works for me.

My son doesn't have a Kindle, but I doubt it will be all that long before he's curling up on the couch with an iPad or his own smartphone, gleefully tapping into a selection of entertainment options -- including every manga ever published -- vastly superior in terms of variety and comprehensiveness than any publishing medium ever invented. It's quite possible that Eli just got caught in a clumsy transition moment, a brief stage of publishing confusion that will vanish in a future where everything we want is incredibly convenient.

There might even be some compelling reasons for Shonen Jump's shift. When I asked Shonen Jump why the print mag was being discontinued, Alvin Lu, the senior vice president and general manager for Viz Media, Shonen Jump's publisher, told me that readers would benefit from the new format.

"The growth of digital distribution has presented an opportunity to publish these serial manga narratives weekly," wrote Lu in an email, "which is how they appear in Japan and, even from the very beginning of the print magazine, is something we've wanted to do, but couldn't given the logistics. The situation is somewhat comparable to, say, following your favorite U.S. TV show, but only being able to watch a new episode once a month or only on DVD, instead of its 'natural' weekly schedule. The added benefit with ALPHA is that we're moving toward simultaneity with the original Japanese publication, so we're erasing the 'tape delay' effect as well. As I've been telling people, manga is very much a LIVE medium in Japan and with WEEKLY SHONEN JUMP ALPHA for the first time American readers can experience this as well. More than ever, readers of SHONEN JUMP series will be able to experience new chapters together (in the span of a week), communally."

But Lu did not dismiss the impact of a down economy and the harsh competitive pressure exerted on all publishers by online distribution. Above and beyond my dismay at seeing a cherished part of my son's life disappear, there's an economic aspect to this narrative that is troubling to anyone who makes a living from publishing. It's harder and harder to make a buck in this business, something I know personally, and something that's clearly true for Viz Media. In 2010, Shonen Jump reduced its publication frequency from 12 months to 10, while at the same time, Viz went through a couple of rounds of layoffs. The bankruptcy and closure of Borders delivered a huge blow to Viz (in addition to Shonen Jump, the company also publishes hundreds of manga in the form of paperback graphic novels).

Can a revenue stream based on online advertising and subscriptions keep Shonen Jump a viable concern? Who will pay for the translations from Japanese if the numbers don't add up? Everyone in publishing asks a version of this question every single day, and there are no clear answers. I am willing to hold out the possibility that innovative approaches will lead the industry out of this morass -- maybe Shonen Jump Alpha will be one of the success stories! But when I first heard the news that the April issue of Shonen Jump will be the last one to drop through my mail slot with its tantalizing thump, I heard, yet again, the sound of a harsh economy and technological changing forcing some tough, unpalatable decisions. And I really have no idea where this is all going to end.