Evangelicals fight amongst themselves 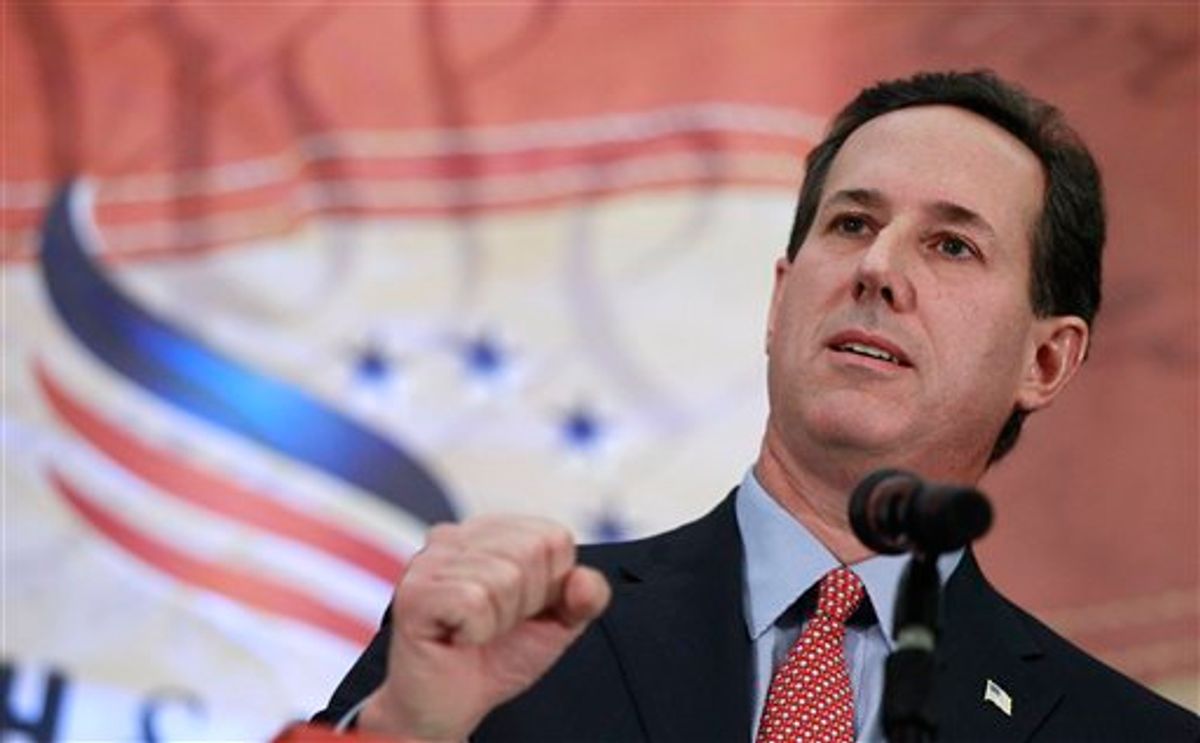 The Saturday meeting of far-right evangelical leaders to endorse Rick Santorum came too late to help either Santorum or the Christian right's overall crusade to find an anti-Romney candidate. But it turns out some attendees are disputing even the belated endorsement, claiming that Santorum backers rigged an unscheduled third ballot after Newt Gingrich backers had already gone home, thinking the meeting was over. Who knew God's men could turn out to be so duplicitous? (Well, a lot of us.)

Family Research Council Tony Perkins has been touting the Saturday endorsement as representing "a clear majority of support for a single conservative candidate" -- sometimes he calls it a "supermajority" -- and that candidate, he says, is Santorum. But supporters of Gingrich, who came in second, say Santorum backers rigged the vote. The group decided they would not endorse unless a candidate won at least 75 percent of the votes present, and although he came in first, Santorum came in far below that threshold in two tries. After that, some Gingrich supporters told Karen Tumulty, people began leaving to catch planes, believing that the group had failed to reach a consensus behind a candidate. Then Santorum backers scheduled a third vote with the smaller crowd, and he beat Gingrich 80 to 25.

Gingrich supporter Jim Garlow, a San Diego megachurch pastor, told Tumulty: "There was never a consensus. All the people I know of who came supporting Newt left supporting Newt." Garlow said he was "shocked" when he heard the announcement that the group had united around Santorum. "It wasn’t a consensus and it wasn’t an endorsement,” added Gingrich backer  J.C. Watts (R-Okla.), who was also there. Watts, Garlow and others attendees released a statement of complaint Monday aftermoon. “It is unfortunate that early press reports incorrectly stated that there was a consensus for Santorum, or that the ’150 leaders endorsed Santorum.’ Such was not the case. Many there were and still are for Newt Gingrich,” it read.

The conservative disarray is also a reminder of the disastrous campaign of Texas Gov. Rick Perry, who was hailed as the man who could unite the party's Christian right base with the establishment. Remember Perry's Prayerapalooza last August, which drew a disappointing crowd of evangelicals to Texas and was supposed to be a sign of Perry's strength with the crowd? It threatened to hurt Perry with the wider public, since Prayerapalooza featured the hateful Rev. John Hagee, who's on record calling Catholicism "a godless theology of hate," and the entire rally excluded not just Jewish, Muslim and other non-Christian clergy, but Catholics as well.

So there's some irony that Perry lost the evangelicals' support to two Catholics, Santorum and Gingrich, who was a Baptist until he converted to Catholicism to marry Callista. Maybe it's a victory for tolerance that evangelicals snubbed the prayerful Perry for men who are part of a church some of them believe is "the whore of Babylon." But it's also a sign that the right wing of the Catholic Church has made itself at home with the most backward forces in American politics.

There's another irony among the GOP also-rans (which will probably soon include Perry; one of his top South Carolina supporters, State Sen. Larry Grooms, just endorsed Santorum and called on the Texas governor to drop out of the race before Saturday's primary.) Late last week Michele Bachmann supporters blamed the sexism of evangelical ministers for her disastrous showing in Iowa. Her Iowa campaign manager Pete Waldron told the Des Moines Register that religious leaders had told him "that a female could not be a civil magistrate." Waldron also pointed to a Santorum staffer's email asking "Is it God’s highest desire, that is, his biblically expressed will…to have a woman rule the institutions of the family, the church, and the state?'" Waldron accused Bachmann's rivals of "a sexist strategy" to deny her the nomination.

A woman who approvingly cites Bible passages saying women must be submissive to their husbands is complaining that right-wing evangelicals are sexist. Shocking. Next Bachmann will discover that vegetarians don't eat meat and the Chinese live in China.

I'll be talking about the latest twists in the GOP race on MSNBC's "The Ed Show" at 8 ET.