Jon Huntsman is no martyr 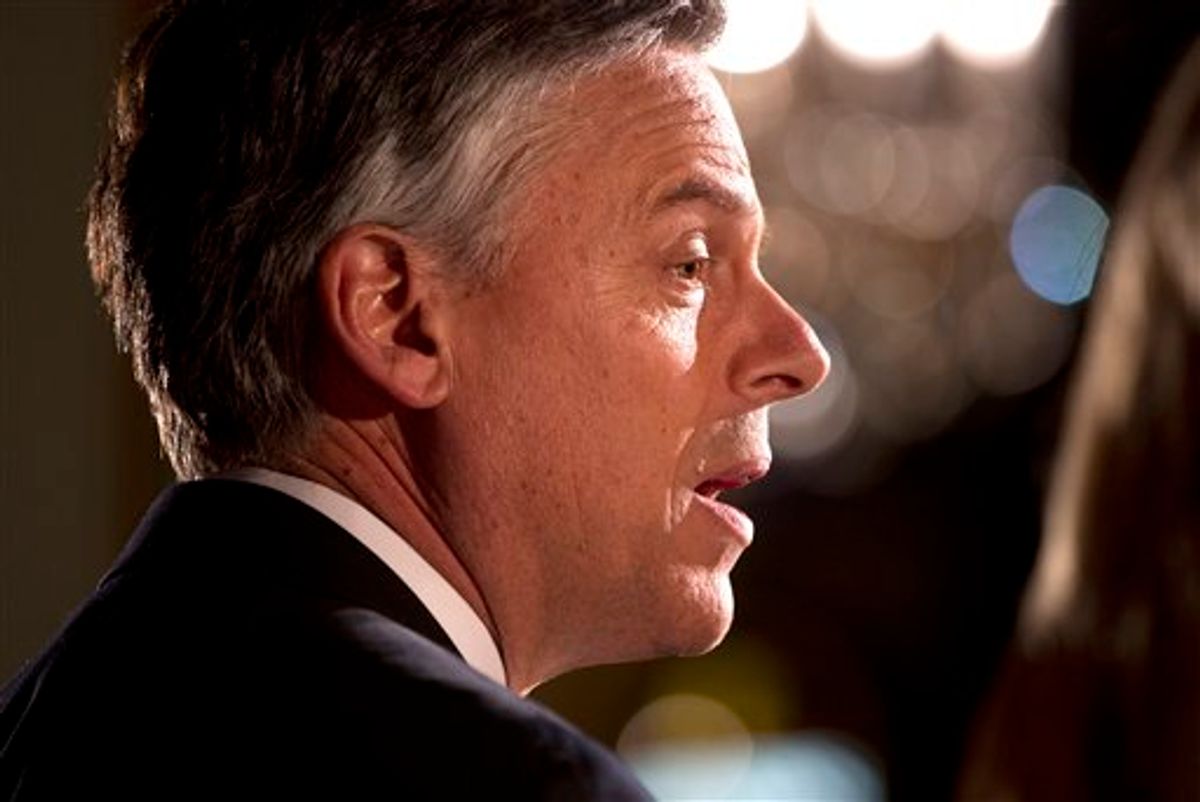 The highlight of Jon Huntsman's presidential campaign, which will officially come to an end later today, came in the final debate before the New Hampshire primary, when Huntsman was attacked by Mitt Romney for accepting an appointment from Barack Obama.

"The person who should represent our party running against President Obama," said Romney, "is not someone who called him a ‘remarkable leader’ and went to be his ambassador to China."

"This nation is divided," Huntsman replied, "because of attitudes like that."

It was the biggest applause line of the entire Huntsman campaign, one that was aired repeatedly on news broadcasts and talk shows and celebrated by non-conservative pundits. And it figures to be treated as the definitive illustration of why his candidacy was always doomed -- proof of the futility of running as a reasonable man in today's GOP. In reality, though, the debate moment was something different: a perfect microcosm of a campaign that was treated by the media as a courageous, principled stand but that actually represented an ambitious politician making the best with the hand he'd been dealt.

Early on, the media latched on to Huntsman as its favorite candidate -- the sane Republican candidate who was trying to sell competence and sobriety to an unhinged party base -- and tracked his campaign with ridiculously disproportionate intensity. This reputation stemmed from Huntsman's tenure as governor of Utah, when he broke somewhat with national conservative orthodoxy by supporting civil unions for same-sex couples, granting driving privileges to undocumented immigrants, and calling for the GOP to take a less strident tone on social issues, and from his willingness to leave that job in 2009 when Obama offered him the ambassadorship.

But let's not treat Huntsman as some kind of ultra-principled martyr. He's an ambitious politician whose overall platform was far more conservative and tactically-driven than many realized. His economic program, for instance, was nothing short of radical -- massive reductions for the super-wealthy and for corporations -- and seemed tailor-made to win approval from the GOP's supply-side wing. He also provided the most unqualified endorsement of Rep. Paul Ryan's plan to end Medicare as it now exists, was just as insistent as every other candidate that healthcare reform and the Dodd-Frank bank reform law be repealed, and sang the standard conservative tune on abortion, gay marriage, gun control and most other hot-button issues. Occasionally, he'd throw his media and non-Republican fans a bone, but he could be just as quick to reverse himself when he sensed an opportunity to make inroads with the right.

It wasn't hard to see the strategy that was at work: Ride the "sane" image to a breakthrough showing in finicky, independent-friendly New Hampshire, then be positioned to win over suddenly curious national conservatives by saying, "Have you actually looked at my platform -- I'm not the moderate you've heard I am."

There are a couple of reasons why this strategy didn't work. One is that the voters Huntsman was depending on in New Hampshire were always very likely to side with Romney, a man they remembered well from his 2008 campaign and his term as Massachusetts governor. So when Romney emerged from Iowa with some real momentum, it became impossible for Huntsman to gain meaningful traction in the Granite State. Another reason was Huntsman himself: As a public speaker, he's a dud. Debates have played an unusually significant role in shaping public opinion in the GOP campaign, and (his direct hit on Mitt notwithstanding) Huntsman consistently faded into the background in all of them.

Huntsman, of course, liked to portray his decision as a patriotic act -- answering a president's call to serve and ignoring his party label. But the evidence suggests he simply overreacted to the significance of Obama's 2008 victory and made a bad political calculation. It's a distant memory now, but recall that in late 2008 and early 2009, Obama's popularity was stratospheric and conventional wisdom held that the Republican Party was entering a long, painful sojourn in the political wilderness. When Obama's team recruited Huntsman in this period, they didn't exactly hide their eagerness to remove a potential GOP foe from the 2012 mix, so it seems that Huntsman made a calculation that was at least as pragmatic as it was patriotic: The '12 nomination was going to be worthless, but teaming up with a transformational president would be a nice credential for 2016.

Huntsman probably didn't see the anti-Obama backlash coming. He was hardly alone in this, even if the GOP's resurgence wasn't exactly shocking, but there he was in Beijing watching the same party that had been given up for dead just two years earlier scoring the biggest midterm gains in decades in November 2010. Suddenly, the 2012 nomination seemed very much worth having -- and if a Republican could win then, there'd be no '16 race. So Huntsman handed in his resignation, hit the campaign trail, and came up with the best strategy that his Obama baggage allowed for. And it wasn't nearly good enough.