Workers, not Romney's bailed-out Wall Street CEOs, are the ones actually putting their livelihoods on the line 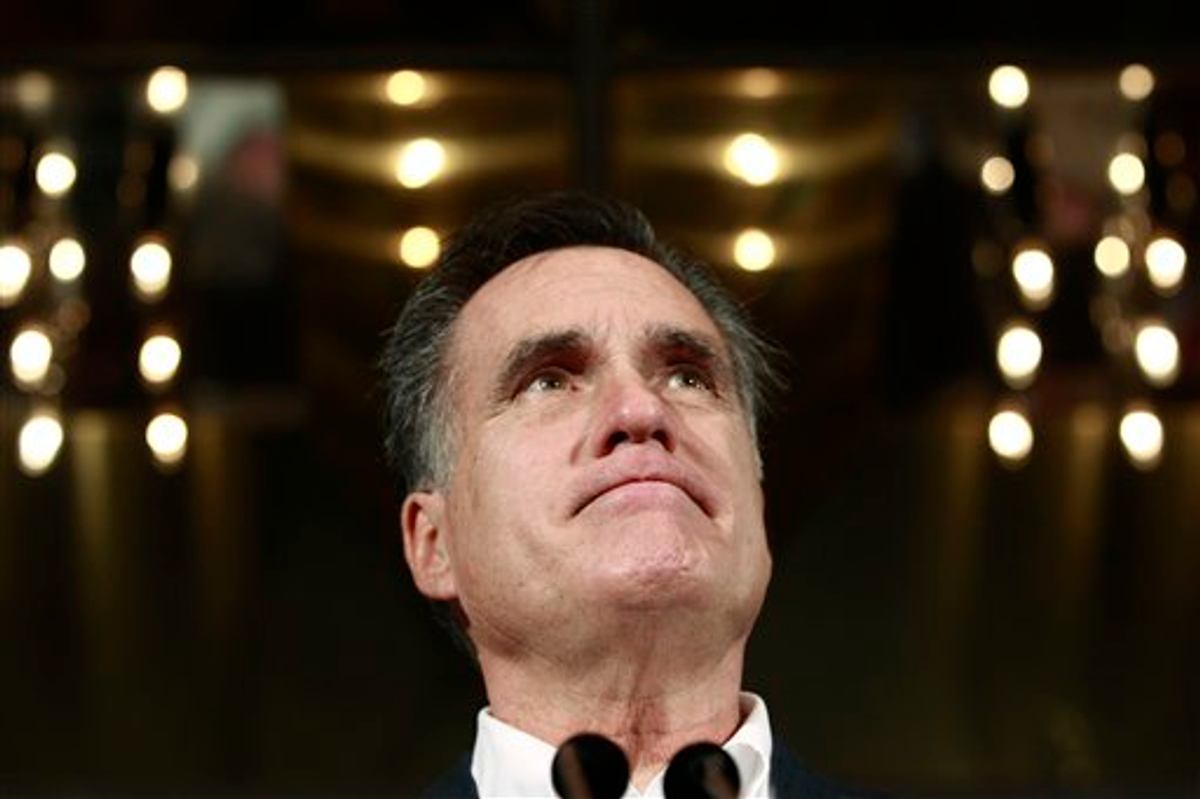 Mitt Romney is casting the 2012 campaign as “free enterprise on trial” -- defining free enterprise as achieving success through “hard work and risking-taking.” Tea Party favorite Sen. Jim DeMint of South Carolina says he’s supporting Romney because “we really need someone who understands how risk, taking risk… is the way we create jobs, create choices, expand freedom.” Chamber of Commerce President Tom Donahue, defending Romney, explains “this economy is about risk. If you don’t take risk, you can’t have success.”

Wait a minute. Who do they think are bearing the risks? Their blather about free enterprise risk-taking has it upside down. The higher you go in the economy, the easier it is to make money without taking any personal financial risk at all. The lower you go, the bigger the risks.

Wall Street has become the center of riskless free enterprise. Bankers risk other peoples’ money. If deals turn bad, they collect their fees in any event. The entire hedge-fund industry is designed to hedge bets so big investors can make money whether the price of assets they bet on rises or falls. And if the worst happens, the biggest bankers and investors now know they’ll be bailed out by taxpayers because they’re too big to fail.

But the worst examples of riskless free enteprise are the CEOs who rake in millions after they screw up royally.

Near the end of 2007, Charles Prince resigned as CEO of Citgroup after announcing the bank would need an additional $8 billion to $11 billion in write-downs related to sub-prime mortgages gone bad. Prince left with a princely $30 million in pension, stock awards, and stock options, along with an office, car, and a driver for five years.

Stanley O’Neal’s five-year tenure as CEO of Merrill Lynch ended about the same time, when it became clear Merrill would have to take tens of billions in write-downs on bad sub-prime mortgages and be bought up at a fire-sale price by Bank of America. O’Neal got a payout worth $162 million.

On the list: Thomas E. Freston, who lasted just nine months as CEO of Viacom before being terminated, and left with a walk-away package of $101 million.

Also William D. McGuire, who in 2006 was forced to resign as CEO of UnitedHealth over a stock-options scandal, and for his troubles got pay package worth $286 million.

And Hank A. McKinnell, Jr.’s, whose five-year tenure as CEO of Pfizer was marked by a $140 billion drop in Pfizer’s stock market value. Notwithstanding, McKinnell walked away with a payout of nearly $200 million, free lifetime medical coverage, and an annual pension of $6.5 million. (At Pfizer’s 2006 annual meeting a plane flew overhead towing a banner reading “Give it back, Hank!”)

Not to forget Douglas Ivester of Coca Cola, who stepped down as CEO in 2000 after a period of stagnant growth and declining earnings, with an exit package worth $120 million.

If anything, pay for failure is on the rise. Last September, Leo Apotheker was shown the door at Hewlett-Packard, with an exit package worth $13 million. Stephen Hilbert left Conseco with an estimated $72 million even though value of Conseco’s stock during his tenure sank from $57 to $5 a share on its way to bankruptcy.

But as economic risk-taking has declined at the top, it’s been increasing at the middle and below. More than 20 percent of the American workforce is now “contingent” -- temporary workers, contractors, independent consultants -- with no security at all.

Even full-time workers who have put in decades with a company can now find themselves without a job overnight -- with no parachute, no help finding another job, and no health insurance.

The risk of getting old with no pension is also rising. In 1980, more than 80 percent of large and medium-sized firms gave their workers “defined-benefit” pensions that guaranteed a fixed amount of money every month after they retired. Now it’s down to under 10 percent. Instead, they offer “defined contribution” plans where the risk is on the workers. When the stock market tanks, as it did in 2008, the 401(k) plan tanks along with it. Today, a third of all workers with defined-benefit plans contribute nothing, which means their employers don’t either.

And the risk of losing earnings continues to grow. Even before the crash of 2008, the Panel Study of Income Dynamics at University of Michigan found that over any given two-year stretch about half of all families experienced some decline in income. And the downturns were becoming progressively larger. In the 1970s, the typical drop was about 25 percent. By late 1990s, it was 40 percent. By the mid-2000s, family incomes rose and fell twice as much as they did in the mid-1970s, on average.

What Romney and the cheerleaders of risk-taking free enterprise don’t want you to know is the risks of the economy have been shifting steadily away from CEOs and Wall Street -- and on to average working people. It’s not just income and wealth that are surging to the top. Economic security is moving there as well, leaving the rest of us stranded.

To the extent free enterprise is on trial, the real question is whether the system is rigged in favor of those at the top who get rewarded no matter how badly they screw up, while the rest of us get screwed no matter how hard we work.

The jury will report back Election Day. In the meantime, Obama and the Democrats shouldn’t allow Romney and the Republicans to act as defenders of risk-taking free enterprise. Americans need to know the truth. The only way the economy can thrive is if we have more risk-taking at the top, and more economic security below.