At Fox's MLK day debate, the black pundit was booed as Gingrich belittled him for asking tough questions on race 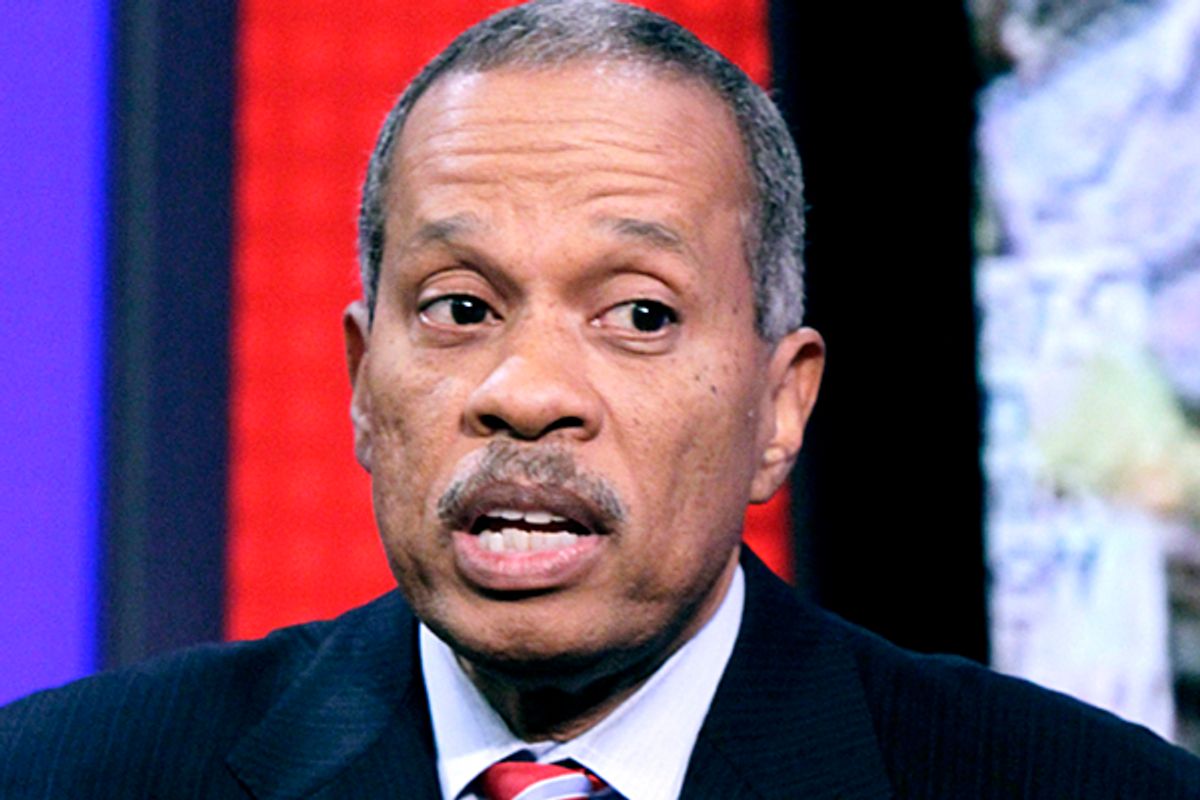 The Fox News debate began auspiciously, with moderator Bret Baier noting that it was our national holiday honoring Dr. Martin Luther King Jr. Then his actual question had nothing to do with Dr. King. But those of us who feared the debate would duck racial issues worried for naught. The night climaxed with the South Carolina crowd giving Newt Gingrich a standing ovation for smacking down Fox's leading black contributor, Juan Williams, for his impertinent questions about race.

Williams asked for it, of course. What was he thinking making tough racial queries at a GOP debate in Myrtle Beach, S.C.? First, he asked Romney how he squared his harsh anti-immigrant rhetoric with his own family's story of moving to and then from Mexico seeking religious freedom. He asked Rick Santorum, who purports to care about poverty, what he would do about high African American poverty rates. He asked Ron Paul whether he thought the nation's harsh drug laws were bad for black people. Then he made the mistake of asking Newt Gingrich about his comments that poor urban children came from communities that lacked a "work ethic," and his calling Barack Obama "the food stamp president."

Gingrich couldn't believe his luck. With a gleam in his eye, he thrashed Williams, and Steve Kornacki believes he may have given his candidacy one last shot with his savvy thumping of Fox's leading black commentator. It hurt to watch. If Newt gets the nomination – he won't, but a Democrat can dream – he'll have to thank Williams at the GOP convention in Tampa, even before he thanks Callista.

Sure, Santorum took his chance to demagogue on race, telling Williams that it only took three things to stay out of poverty in America: "Work, graduate from high school, and get married before you have children." He didn't allow that any residue of racism or discrimination might make it harder for African Americans to work, graduate from high school or marry. Santorum also made unfounded allegations, again, about the Obama administration forbidding certain federal programs from talking about marriage. But at least he answered Williams with some personal respect.

Gingrich looked as happy about Williams's questions as he looked deflated at the last New Hampshire debate. The former NPR analyst referenced Gingrich's belittling comments about poor kids lacking role models with a work ethic, and the NAACP "demanding" food stamps not jobs, and asked, "Can't you see that this is viewed at a minimum as insulting to all Americans, but particularly to African Americans?"

"No," Gingrich said petulantly, with a slight pause. "I don't see that." The crowd screamed with glee. Gingrich went on to bash unionized janitors in public schools, and I realized that his student-janitor comments represent a right-wing political trifecta, bashing anti-business regulations like child labor laws, public sector unions and lazy "urban" kids. Oh, and he also got to attack elites this time around, insisting his janitor plans drew liberal disapproval because "only the elites despise earning money."

But Williams didn't back away. "The suggestion you made was about a lack of work ethic," he told Gingrich. "It sounds as if you are seeking to belittle people." The crowd booed Williams lustily, and Gingrich got a special twinkle in his eye. He looked at Williams like he was a soon-to-be ex-wife.

"First of all, Juan" – and there was a slight cheer when the former speaker called the Pulitzer Prize winner "Juan" – "the fact is that more people have been put on food stamps by Barack Obama than any president in American history. I know among the politically correct you're not supposed to use facts that are uncomfortable.

"Second, you’re the one who earlier raised a key point,” he continued. “The area that ought to be I-73 was called by Barack Obama a corridor of shame because of unemployment. Has it improved in three years? No — they haven’t built the road, they haven’t helped the people, they haven’t done anything. I'm going to continue to help poor people learn how to get a job, learn how to get a better job, and someday learn how to own the job." The crowd jumped to its feet screaming "Newt! Newt! Newt!" Fox cut to a commercial.

Where to start? Of course Obama hasn't "put" anyone on food stamps. The Bush economy nearly doubled the poverty rate, the GOP wouldn't stand for a stimulus as large as needed, and unemployment and underemployment remain scandalously high. And South Carolina's famous "corridor of shame" isn't about the proposed I-73, or unemployment – the term refers to a band of decrepit, under-funded rural African American schools that happen to be near that stretch of interstate. Candidate Barack Obama famously visited some of those broken schools and denounced the broken promises they symbolized.

And at his first address to Congress, he invited Ty'Sheoma Bethea, a student at Dillon, S.C.'s J.V. Martin Middle School, who wrote a heart-breaking letter asking for help that concluded memorably, "We are not quitters." Bethea sat in a box with First Lady Michelle Obama, an angry black girl alongside to an angry black woman in the eyes of the right. The Washington Times attacked Bethea for demanding a handout and denounced the 14 year old as a symbol of "not responsibility but irresponsibility." Gingrich didn't mention the girl, but he'd probably suggest she get a janitor job at her school rather than complain about its funding.

Beating up on Williams as well as poor kids like Ty'Sheoma Bethea, Gingrich had his best debate night yet. It's not likely to be enough to beat Romney, but it should help him fend off Santorum, despite the (contested) endorsement of right-wing evangelicals this weekend. Once again, South Carolina proves to be the corridor of shame in the GOP presidential primary, featuring some of the ugliest racial politics seen anywhere. Strom Thurmond is gone but not forgotten.