In a campaign so crazy that the jokes should write themselves, "SNL's" political humor has been flat and uninspired 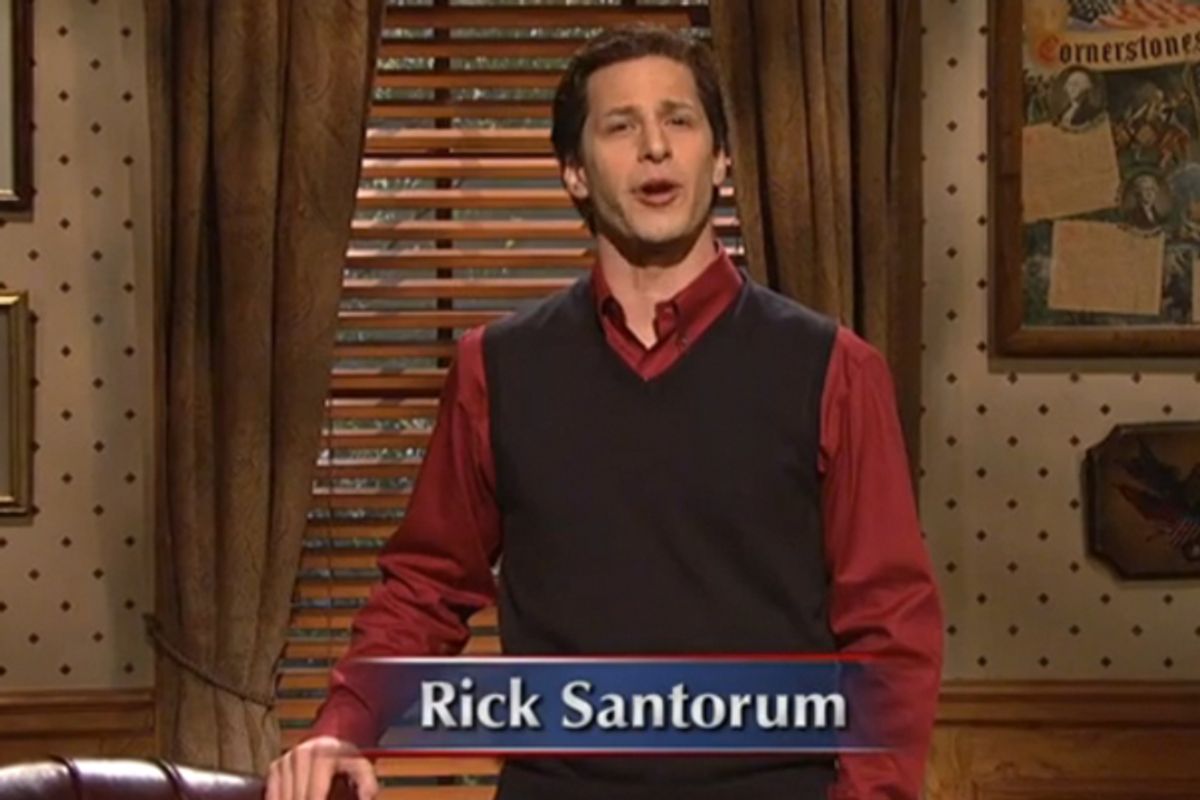 After a week in which Mitt Romney's "I like to fire people" gaffe caught fire and fellow Republican candidates denounced him as a vulture capitalist, his campaign must have winced when they tuned into "Saturday Night Live" and saw Jason Sudeikis, as the GOP front-runner, sitting in a South Carolina diner. Turned out it had nothing to worry about -- on "SNL," Romney was the same mildly robotic guy as ever, only now he also liked to fire his breakfast. When his waitress asked him how he liked his eggs, Sudeikis-as-Romney cracked, "laid off."

But even that was funnier than the cold open the week before, following Rick Santorum's near-victory in the Iowa caucus. Santorum lost to the monotoned Mormon by just eight votes, and his statements on the trail since his rise in the polls must have seemed like belated Christmas presents to comedy writers. Surely Andy Samberg, the goofiest cast member, would let his freak flag fly, right? Instead, Samberg spent five minutes setting up a joke about Santorum’s 100-day, 99-county Iowa campaign, pledging to visit every county in America to beg for votes, even braving the “heavily armed population” of Monroe County, Tenn., that inspired "Deliverance" and the “thousands of angry pillow biters and doughnut bumpers” of San Francisco county. Why? Get ready for the punch line: “This is about the country that has given so much to me and to which I want to give something in return,” says Samberg-Santorum, “so that maybe one day, long after I’m gone, my grandchildren can look me up on Google and find something, you know, different from what’s there now.”

Samberg’s Santorum would’ve gotten more meaningful laughs if he’d just turned up wearing a foamy mocha-latte mustache, promoting the chocolate-frothy caffeinator as his official campaign beverage. Even Jay Leno had sharper barbs (“He lost by only eight votes … You know what’s ironic? He could have won if he’d just gotten the gay vote”).

It's been that kind of year on "Saturday Night Live." The Republican presidential field is an embarrassment of crazy-train riches. But the writers have been lazily broad-stroking caricatures of the candidates, and the result has been surprisingly edgeless and increasingly lame sketches. There's no bite to Sudeikis' Romney, played as a mere socially inept square. Kenan Thompson’s Herman Cain was a clueless, oversexed black man with dumb luck and box loads of pizza metaphors. “Fences. Jesus. Papilloma. Eyeballs,” is the essence to Kristin Wiig’s Michele Bachmann — exact words borrowed from Wiig-Bachmann’s actual post-Iowa closing statement on the Jan. 7 “Weekend Update” (even the pith of “Weekend Update” anchor and "SNL" head writer Seth Meyers has dulled this year).

The "SNL" writers wrote off Newt and Ron Paul as viable candidates early in the game — surge be damned — so Bobby Moynihan has been left to grin idly in his Phil Donahue wig, when he could have, at the very least, seized an opportunity to spoof Gingrich’s amazing concession speech in Iowa, a study in aggressive passive-aggression, directed at Romney. Why wasn’t more made of Romney’s relationship to Jon Huntsman, a distant relative from a rival Mormon clan — where’s the “Big Love” sketch? At the very least, a “Romeo and Juliet” number with one of Huntsman’s daughters and one of the Romney boys. I’d even take a “Brady Bunch” skit. With each GOP contender flitting away -- after Huntsman's exit on Monday, we might never see two Republican Mormons running for president -- so too goes another missed opportunity, the unrealized jokes piling up like stacks of yesterday’s newspapers.

Though "SNL" is not strictly a political-satire show like "The Daily Show" or "The Colbert Report" -- two shows that have had no problem doing both smart and funny work in recent months -- it does have a reputation for edgy political commentary, for shaping the national conversation. And while the "SNL" cast and creators often dismiss criticism of the show by suggesting that everyone believes the show's heyday is when they were in high school, you don't have to go back far to find a golden age of political comedy. During the 2008 election, the sketch-comedy show was even lauded for being a game-changer: Tina Fey’s entitled, ignorant Sarah Palin (“I can see Russia from my house”) was spot-on, and Amy Poehler perfectly evoked the rage and righteous indignation of her Hillary Clinton, and made viewers appreciate her plight for the White House, her resentment of Obama, her outright hatred for Palin. Neither required too much embellishment — that was the beauty of the sketches, and the performances — and as a result, our hunches about the various candidates were confirmed, through these laugh-out-loud depictions, during an election when so many Americans were sitting on the fence. And so these enter the pantheon of iconic "SNL" political impressions: Chevy Chase’s buffoonish and clumsy Gerald Ford, Dana Carvey’s catchphrase-obsessed George H.W. Bush, Phil Hartman’s white-trashy fast-food-bingeing womanizer Bill Clinton (and later, Darrell Hammond as a cool-headed smooth-talker through Whitewater and Monica), and Will Ferrell’s willfully ignorant playboy Dubya.

"SNL" has had an undeniable impact on the culture, on the way candidates are perceived, and as recently as the last election, it has proven how persuasive it can be -- or, at least how it can nudge us in a direction we were considering. And edgy is best left to the professionals, the Stewarts and Colberts. To be fair, that’s not "SNL’s" aspiration or mandate. They just need to make viewers laugh. Because if viewers are laughing, it means they’re listening.

And this is where "SNL" is failing viewers right now, by resting on those laurels of 2008. They’re writing as if, in the words of Vanessa Bayer’s moderator in “Yet Another GOP Debate” sketch from October, “No one is watching, so the stakes are low.” As the race whittles down, and Republicans seem more and more likely to settle for Romney, pens need to sharpen -- right now, it is too easy to watch "SNL" on DVR, with a finger on the fast-forward button, searching for a chuckle. Sudeikis is leaving at the end of the season: It’s an opportunity to have more fun with Romney (please let it be Taran Killam). And must we really endure another year of Fred Armisen's Obama, as a too-calm, emasculated, disempowered world leader? It’s a dreadfully boring narrative thread.

But if these writers had a hard time making the present cast of GOP characters interesting, it's hard to imagine that they'll be inspired by the next 10 months of Romney and Obama. We expect Romney and Obama to be cautious candidates -- but that's hardly an excuse for such timid and uninspired satire.