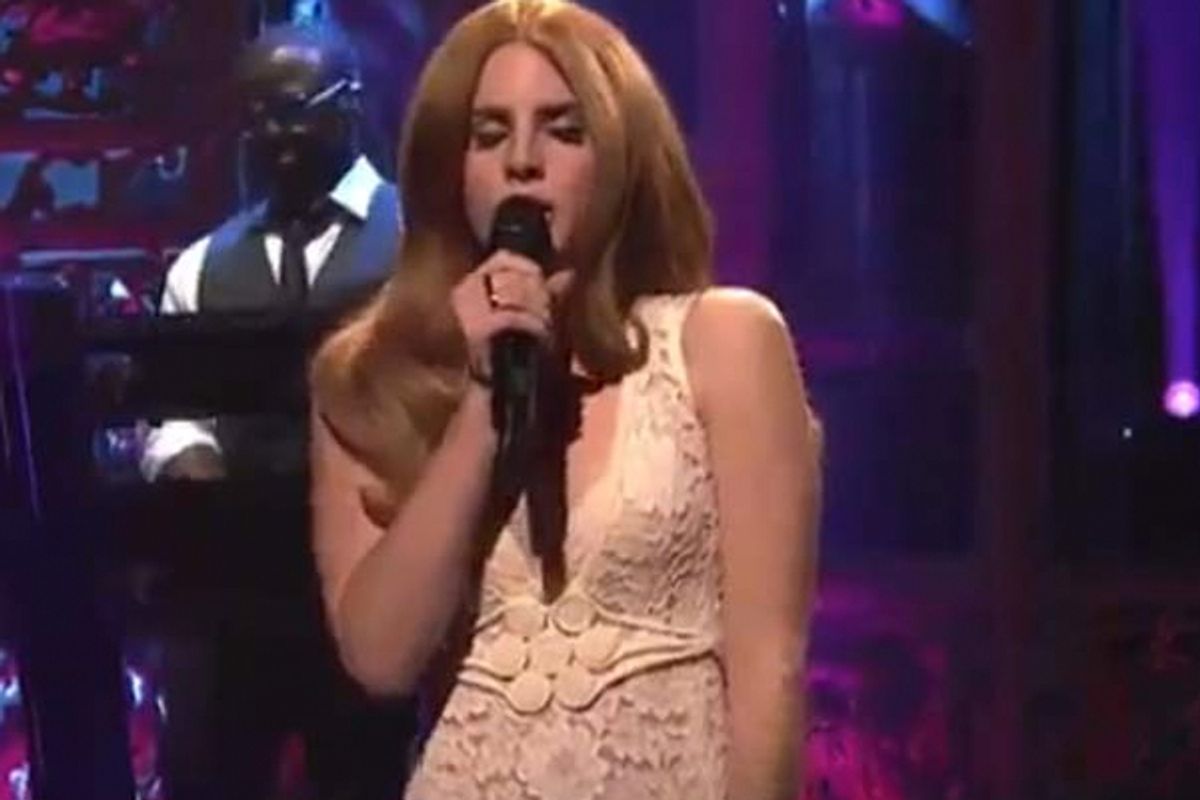 Just one week ago, Lana Del Rey was pop music's new It Girl, riding high on the hype from her "Hollywood sadcore" YouTube sensation "Video Games." Her lushly pouty "Born to Die" was iTunes' pick for single of the week. And, with almost zero live experience, she landed the plum spot as musical guest on "Saturday Night Live." Then she got up and sang live on national television.

It took just moments for a scorching hot career to take an unexpected detour into the ditch of public scorn. Del Rey opened up her mouth and a collective "WTF?" went up across the land. Standing onstage with her glossy hair, dragon nails and slinky gown, she droned her way through "Video Games," swaying awkwardly, fiddling with her hair, and rubbing her hands on her thighs in a manner that seemed more "I'm just wiping off the palm sweat" than "Come over and feel me up, Big Boy." How bad was her performance? At one point she did a full 360 twirl. During a ballad.

As the horror unfolded in real time, the Twitterverse gaped in astonishment. Juliette Lewis dryly noted, "Wow watching this 'singer' on SNL is like watching a 12 yearold [sic] in their bedroom when theyre pretending to sing and perform #signofourtimes." And though Lewis graciously later deleted the tweet, praising her "great haunting melodies!" others were not as generous. As Eliza Dushku asked, "Who.....is.....this wack-a-doodle chick performing on #SNL..? Whaaaa?"

In the aftermath, the horror did not subside; it seemed to take on a morning-after life of its own. Mediaite opined that "The level of excruciating badness was so palpable, it felt like a wake" and none other than slow-jam master Brian Williams sent a note to Gawker about "one of the worst outings in SNL history… booked on the strength of her TWO SONG web EP, the least-experienced musical guest in the show's history," in the hope of receiving a trademark Gawker "withering, detailed critique."

How did no one see this coming? Del Rey told MTV last week that she was "a little nervous" about the gig. "You just hope it goes well and you don't f*** it up," she said, but promising  "I'm sure it will be good." And when she did a similarly catatonic performance on Jools Holland's show in the U.K. last fall, the performance passed without notice. Anyway, with her distinctively David Lynch movie sound and the kind of looks that have landed her a modeling contract, you'd think she'd be money in the bank.

But putting a virtually untried performer on such an iconic platform was a move fraught with potential pitfalls. And for all her moody, Guess? jeans posturing, there seems an air about Del Rey of a woman who has not yet found her true voice. She is, after all, a self-proclaimed "gangsta Nancy Sinatra" -- which is perhaps her way of warning us that she's intentionally going for that naughty blond deer in the headlights effect. And just like Nancy -- and Rebecca Black, for that matter -- she owes a big career debt to her bigshot dad. Del Rey's father, millionaire investor Rob Grant, helped with the marketing of her first album two years ago. Back then, she was still Lizzy Grant, the rich kid who grew up in upstate New York and went to boarding school in Connecticut. Months later, she had morphed into Lana, a mystery lady who "at one time lived in a New Jersey trailer park" and whose name sounds like a Mexican brand of cigarettes. The image, she explained, "came from a series of managers and lawyers over the last five years who wanted a name that they thought better fit the sound of the music."

The former Elizabeth Grant will likely solider on. Both Ashlee Simpson and Ke$ha managed to bounce back from their disastrous "SNL" performances and, God help all our ears, live to sing another day. Del Rey has just been booked for a coveted spot at the South by Southwest festival, and "Video Games" is a respectable No. 44 on the iTunes singles chart. It's far from the kind of post-national television debut bounce any artist would hope for, but it's a better deal than most working singer-songwriters ever get. And if you saw the rest of the "SNL" episode, you know that Del Rey was far from the only cringe-worthy element of the show.

The week's host, the ever-gracious Daniel Radcliffe, said this week that "It was unfortunate that people seemed to turn on her so quickly. I also think people are making it about things other than the performance." But really it's just the opposite. In an elegantly orchestral music video or on a well-produced track, Del Rey is all smolder and pouts. She can sing of being a "bad girl" and sell it. On live national television, she's a still inexperienced girl, awkward and stiff and, frankly, boring. Her album will be released Jan. 30. Only then will we learn whether anybody's really buying the woman who seemed to be the next big thing.