"Modern Family," the F-bomb and the power of suggestion 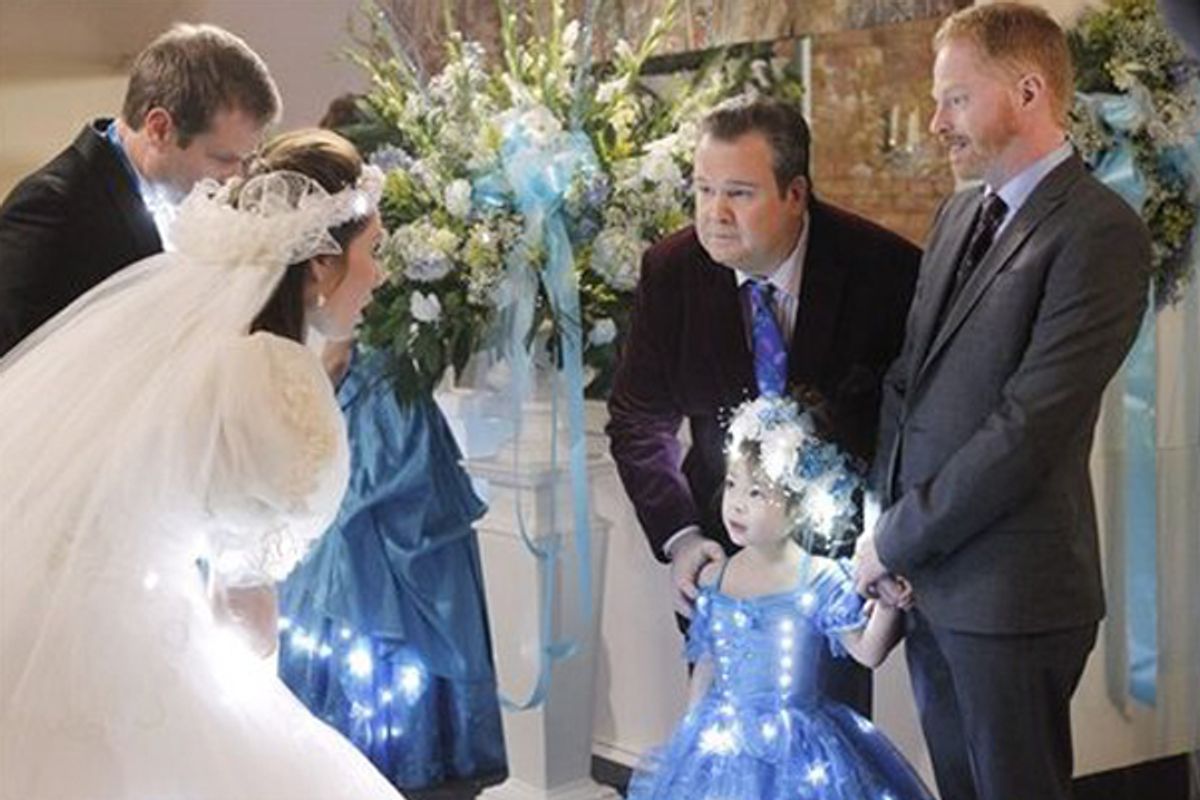 Just take some deep cleansing breaths into a paper bag. Go to your happy place of rainbows and sea otters. Because tonight, there will be bleep.

In an episode of ABC's "Modern Family" sure to corrupt your children and ruin your crops, the preschool character Lily will appear -- thanks to some clever bleeping and pixelation -- to drop the dreaded F word. The network has assured viewers that the young actress, Aubrey Anderson-Emmons, really said "fudge" during taping. But that's not sufficient for the adorably named McKay Hatch, an 18-year-old Brigham Young University-Idaho student and founder of the No Cussing Club, from getting plenty of attention for his campaign to get the network to withdraw the episode. Hatch told the Associated Press that "people all over the world don't want to have a 2-year-old saying the 'F-bomb' on TV." Oh, Mr. Hatch, I don't think you've been watching enough television.

It's true that Hatch's crusade has about as much chance of success as Paris Hilton's new album -- the show's creator and executive producer Steven Levitan said last week that he's "proud and excited" about the story line because "as parents, we've all been through this." But it's Hatch's insistence that this is about "a 2-year-old saying the 'F-bomb' on TV" -- and the way that claim has gone unquestioned by the likes of Babble and the Inquisitr, which noted  "the little girl will be using a cuss word on television" -- that is so telling.

Of course, the idea is that Lily is cursing. That's the comic plot point – a child letting rip with a taboo word, to the humiliation of her parents. It's just like in "A Christmas Story," when young Ralphie drawls out a slow motion "Oh fuuuuuudge," as his older self narrates, "Only I didn't say 'fudge.'" The child isn't really cursing. ABC isn't broadcasting the word. So settle the eff down already.

The bleep has, in recent years, become a joke unto itself. It's deployed regularly on "Up All Night" and "The Daily Show." It made it all the way into the title of William Shatner's ill-fated "$#*! My Dad Says." And it will unquestionably be heard elsewhere on television Wednesday night, as Steven Tyler unleashes a whole new season of colorful, expletive-laden catchphrases on "American Idol."

But a bleep is not a naughty word, and neither are a few well-placed dashes. They are a suggestion of one. They coax the listener to do the heavy lifting and imagine the word, not aloud but there inside his or her own head. It's its own special kind of profane, which is probably why it so unnerves young Mr. No Cussing.

What's amusing is watching television networks figure out how to accommodate our varying levels of tolerance for cursing without P-ing off their viewers and the FCC. Already this year the forthcoming "Don't Trust the Bitch in Apartment 23" has morphed into "Don't Trust the B---- in Apartment 23," while "Good Christian Bitches" has cleaned up as "GCB." And just last week, the Supreme Court mulled the "inconsistent standards" regarding both nudity, profanity and broadcast decency, which are sloppily applied in an age in which rapidly evolving technology is making the rules harder to articulate, let alone enforce.

When the Supreme Court took up the subject of broadcast decency in a potentially landmark case last week, some members of the court, as Garrett Epps put it, “all but begged America's broadcasters to remain an island of decency in a sea of filth.” There’s no question that raising or eliminating the standards for indecency would increase the number of things television shows could portray or say on air, but it would also mean that they could tell different kinds of stories about the way we talk to each other, the sex we have and the cruelties we commit against each other.

In television as in life, not every word is appropriate for every audience, and sensitivity and respect for those parameters needs to be considered. But it should be a whole lot more obvious than it apparently is that "b----" is not "bitch," and that no matter what you call it, that Christian chick show will be canceled too soon for anyone to care, anyway. For now, however, networks will stumble through the clumsy terrain of pixels and dashes, attempting to have their profanity and not actually utter it -- and in a manner that can only be called crude.