Movie stars modeling skiwear? Not so much. But Robert Redford's indie-film shindig has adjusted to hard times 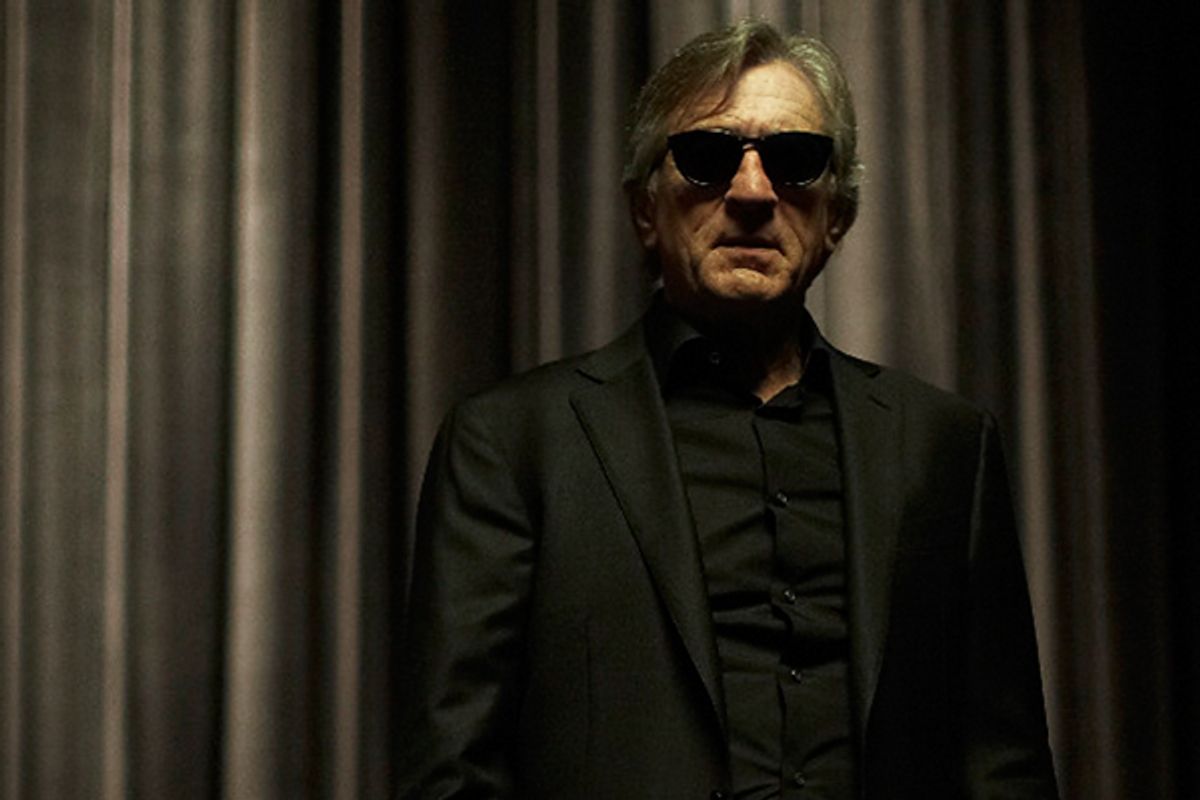 To paraphrase a famous movie that would never have played there, the Sundance Film Festival is like a box of chocolates -- served on top of a snowbound mountain range in the dead of winter. You never know what you're going to get: a delectable surprise or broken dental work.

If Robert Redford's annual celebration of independent film is no longer the cutting-edge cultural phenomenon it appeared to be in the 1990s, it also isn't the wretched-excess Sundance of the early 2000s, when the overly precious downtown of Park City, Utah, was bedecked with "gifting lounges" that attracted all kinds of entertainment and sports celebrities who had no plausible connection to the independent-film business. Current festival director John Cooper took the reins from longtime director Geoff Gilmore (a charismatic and polarizing figure) two and a half years ago, just as the national economy was going south. Whether by coincidence, strategy or an inevitable consequence of structural change, Cooper's first two festivals have felt leaner and more focused on actual films and filmmakers -- and a lot less possessed by paparazzi and B-plus Hollywood stars modeling ski fashions.

Contrary to what you might assume, the indie-film market isn't doing too badly. While the 2011 festival produced no huge box-office hits or major Oscar contenders, lots of films sold to distributors and a good proportion of those went on to modest success with critics and "specialty audiences" (the industry phrase used to denote art-house and festival attendees in big cities and college towns). Cooper's opening-night quartet consisted of the Harry Belafonte documentary "Sing Your Song," the African-American indie "Pariah," the hilarious Irish cop comedy "The Guard" and James Marsh's chimp documentary "Project Nim." Among the festival's award winners were "Like Crazy," "Hell and Back Again," "Buck," "Circumstance," "Senna," "Martha Marcy May Marlene," "Tyrannosaur," "Another Happy Day," "If a Tree Falls" and "The Black Power Mixtape 1967-1975." From a movie-lover's point of view, that's not a glass half-full; it's a brimming cup of fresh-brewed goodness.

Thankfully, the late-night bidding wars that often followed Sundance premieres in the festival's glory days are a thing of the past. (Most infamously, Focus Features ponied up $10 million for the 2008 Steve Coogan comedy "Hamlet 2," which slayed crowds at the festival -- and then made less than half that amount in general release.) But with the widespread availability and acceptance of video-on-demand -- whether on cable, via satellite or through the Internet -- smaller films can reach many more people more rapidly than ever before. With the cost of entry-level filmmaking at an all-time low, it's possible to break even or turn a small profit with a movie most Americans will never even know about. I've had more than one indie director tell me that selling VOD rights has enabled them to pay off their actors and technical crew. If the movie then goes on to play a few theaters, that's pure gravy. Nobody's getting rich through that model, to be sure, but it allows economical and business-savvy artists to keep doing their work.

Since Sundance's principal focus remains low- or mid-budget American movies that have just been completed and were made close to the ground, it often offers a kind of weather report on the national mood. This year's lineup features topical documentaries about the continuing healthcare crisis and the endless, pointless War on Drugs, along with Thursday night's festival opener, "The Queen of Versailles," a controversial doc about a real estate developer struggling to complete the country's largest McMansion. There are also historical films about the growth of the environmental movement and the angry, desperate and highly successful AIDS activism of the '80s and '90s. For a festival long associated with low-budget narrative film, in fact, Sundance may be at its best with documentaries. (Very quietly, it's also become a pretty good showcase for offbeat foreign films.)

This year's Sundance narrative features skew, if anything, toward genre films, notably thrillers and raunchy comedies. That trend has been brewing for several years, and may reflect the national mood in its own way. Even indie filmgoers, perhaps, have seen enough movies about lovelorn young people who drink too much and make bad decisions. Furthermore, the paying public has largely stayed away from downbeat dramas about unemployment or foreclosure or similar Great Recession topics, for entirely understandable reasons.

I've picked 15 movies I'm most excited about seeing in the coming days, but I could easily have pushed the list to 30 or 40. (How am I possibly going to squeeze in "Room 237," the conspiracy-theory documentary about the hidden messages supposedly encoded in Stanley Kubrick's "The Shining"? Or the insane-sounding, Web-derived cult horror flick "John Dies at the End"?) And since I've only seen a couple of these in advance, I make no guarantees of quality. If this year's Sundance doesn't boast the star power of some previous festivals, we're still talking about a gathering that will bring Kirsten Dunst, Chris Rock, Robert De Niro, Bruce Willis, Spike Lee, Stephen Frears, Rebecca Hall and a couple of thousand less famous people from all corners of the film industry and cram them together amid the slush and traffic of a ski resort in the middle of January. I complain about Sundance a lot, but it's a great privilege to get to go. I'll freeze my fingers and toes and possibly my cellphone, and at some point I'll probably learn (again) that more than one drink at high altitude is an immensely bad idea. What fun!

2 Days in New York Star and director Julie Delpy is back with a sequel to her zany hit "2 Days in Paris," this time starring Chris Rock as her new boyfriend, with whom she's shacked up in Manhattan. At least until a houseful of French relatives and partners (including Delpy's real-life father) descend upon them, armed with enlightened sexual views -- and less enlightened views on race.

Bachelorette Kirsten Dunst heads the cast of boozing, coke-snorting professional women as they celebrate the first of their number -- long known as "Pig Face" -- to tie the knot. I know writer-director Leslye Headland's debut feature sounds like a "Bridesmaids" knockoff, but I'm assured that's not the case.

Detropia Terrific documentary-makers Heidi Ewing and Rachel Grady, who brought us "Jesus Camp" and "12th & Delaware," now visit Detroit, whose rise and fall -- and possible rebirth as a city of scavengers, homesteaders and artists -- could be the story of industrial-age America in a nutshell.

A Fierce Green Fire Based on the book by New York Times reporter Philip Shabecoff, this ambitious history of the environmental movement from activist filmmaker Mark Kitchell ("Berkeley in the Sixties") is sure to be a major draw.

How to Survive a Plague A tale of the 1980s AIDS epidemic, and how an angry activist army helped turn the tide. Faced with government indifference, widespread social hostility and a slow-moving medical bureaucracy (not to mention a devastating virus), a self-appointed army of HIV-positive men and women attacked on all fronts in an effort to save their own lives. David France's documentary takes us back to those heated days, exploring how groups like ACT UP and TAG made medical history.

Keep the Lights On Director Ira Sachs, who made the exquisite Sundance prize-winner "40 Shades of Blue" a few years back, returns with what sounds like this year's hottest gay-themed film, a '90s New York romance that follows the tumultuous, chemically enhanced love affair of a documentary filmmaker and a closeted lawyer from beginning to end.

Lay the Favorite British director Stephen Frears has bounced back and forth from London to Hollywood his whole career, but he hasn't been at Sundance since 1991. Rebecca Hall plays the stripper-waitress who places bets all over Vegas for professional gambler Bruce Willis -- at least until his wife (Catherine Zeta-Jones) puts her foot down. Sounds a lot like a follow-up to Frears' long-ago hit "The Grifters," and I imagine he's thinking that way too.

The Queen of Versailles This reportedly delirious documentary by Lauren Greenfield about a billionaire couple's quest to build America's largest house (at 90,000 square feet!) already seemed like a must-see. Then the developer profiled in the film sued Greenfield and the festival, claiming that he was presented as going broke when he hasn't. What's that they say about bad publicity?

Red Hook Summer It's Spike Lee's first personal, Brooklyn-set film in many years, and while it's not exactly a sequel to "Do the Right Thing," he himself is back as the now middle-aged Mookie, once the ambiguous hero (or villain) of that film. A boy from Atlanta is sent to the eponymous Brooklyn neighborhood to live with his fire-and-brimstone preacher grandfather, whom he's never even met. But we hear the comedy turns explosive halfway through.

Red Lights Perhaps the most obvious would-be commercial hit at this year's festival features Cillian Murphy and Sigourney Weaver as paranormal researchers out to prove that a legendary blind psychic (Robert De Niro) is a fake. But is he? Elizabeth Olsen and Toby Jones also star for Spanish writer-director Rodrigo Cortés, who's looking for his big American breakthrough.

Simon Killer Advertised as a neo-noir thriller about an American post-collegiate drifter (Brady Corbet) who falls in love with a Parisian prostitute, this is also the second feature from writer-director Antonio Campos, whose "Afterschool" marked him as the first full-fledged auteur of the post-YouTube era. (I know how obnoxious that sounds, but check it out if you haven't seen it.)

Tim and Eric's Billon Dollar Movie You know, I'm not sure that Tim Heidecker and Eric Wareheim's brand of absurdist humor (well known to Adult Swim viewers) is exactly my thing. But there's no doubt that their debut as film writers, directors and stars -- a big corporation gives them a billion smackeroos to make a movie and, shockingly, they blunder it all away -- will be one of Sundance's most madhouse-y events. Will Ferrell, John C. Reilly and Zach Galifianakis costar, and I hear other Hollywood luminaries show up for the nutty laffs as well.

West of Memphis Yeah, there's already been a documentary about the highly dubious murder conviction of the West Memphis 3 -- in fact there have been three, Joe Berlinger and Bruce Sinofsky's just-completed "Paradise Lost" trilogy. But writer-director Amy Berg's new film, which is backed by Peter Jackson and lists recently released WM3 defendant Damien Echols as a producer, reportedly offers new interviews, new background and new theories about what really happened.

Wish You Were Here This year's entry in the Aussie genre-film sweepstakes is Kieran Darcy-Smith's reportedly ingenious debut feature starring Joel Edgerton. A young foursome goes on a Cambodian vacation -- but only three of them come back and try to resume their normal lives. You just know the secret's gonna come out somehow!

Your Sister's Sister Acclaimed Pacific Northwest micro-indie auteur Lynn Shelton ramps up the star power in her follow-up to her 2009 Sundance hit "Humpday." This likable, lo-fi rom-com brings a depressed drifter (Mark Duplass) to an island cabin with a bottle of tequila and a newly single lesbian (Rosemarie DeWitt) who seems suspiciously interested in him. And then there's the fact that it's her sister (Emily Blunt) he really likes.