Finding apps for the shadow economy

The digital divide is fast becoming ancient history, thanks to the all-powerful smartphone 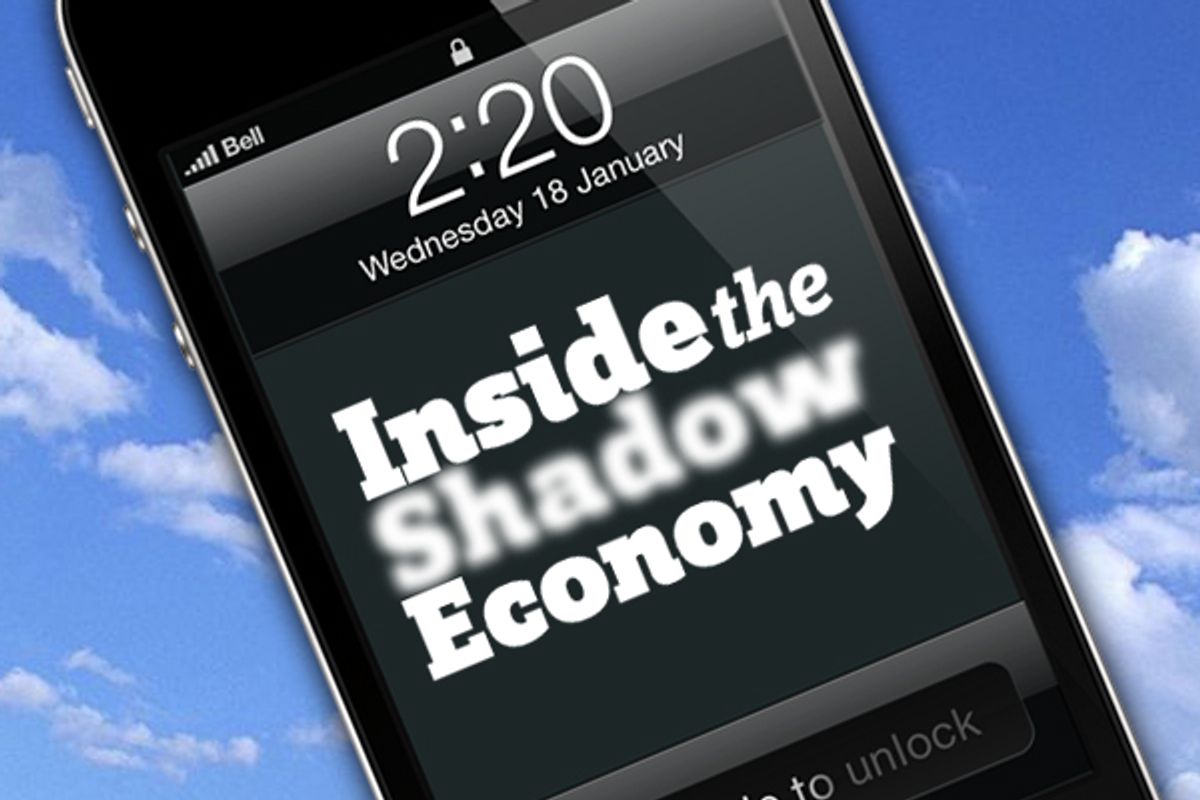 Could the right smartphone app help bring light to the shadow economy? The Department of Labor thinks so. Last May, the DoL announced the release of a new iPhone app: Timesheet. The purpose of the app is to help combat the off-the-books plague of "wage theft" -- the increasingly common practice in which employers shortchange their workers by denying them overtime pay or break time, or failing to pay the legally mandated minimum wage.

Timesheet, says the DoL, is an app that will "help employees independently track the hours they work and determine the wages they are owed. Available in English and Spanish, users conveniently can track regular work hours, break time and any overtime hours for one or more employers."

"This new technology is significant," reads a DoL press release, "because instead of relying on their employers' records, workers now can keep their own records. This information could prove invaluable during a Wage and Hour Division investigation when an employer has failed to maintain accurate employment records."

The Labor Department is putting some muscle behind its digital efforts; under the leadership of Secretary Hilda Solis, Labor has hired hundreds of new enforcement investigators. But one could easily scoff. With unemployment at historically high levels, why is the federal government putting scarce resources to work creating smartphone apps? How many victims of wage theft -- typically workers at the lowest end of the economic scale -- even own a smartphone?

More than you might think. A smartphone, with accompanying data package, is significantly more expensive than the regular old (soon to be extinct) cellphone or land line, but compared to other ways of getting online -- a desktop or laptop computer plus DSL or cable broadband access -- the smartphone is the best deal in town. A review of survey data points out a provocative fact: Smartphone adoption is occurring at faster rates among lower-income Americans and minorities. Turns out, there is more than enough room in the shadow economy for smartphones -- for many people, they are fast becoming the indispensable lifeline that connects them to the wired world.

We've known this for years with respect to the developing world; as Jeffrey Sachs, author of "The End of Poverty," told CNN last October, "The cell phone is the single most transformative technology for development."

"Poverty is almost equated with isolation in many places of the world. Poverty results from the lack of access to markets, to emergency health services, access to education, the ability to take advantage of government services and so on. What the mobile phone -- and more generally IT technology -- is ending is that kind of isolation in all its different varieties."

But what we haven't seen, until very recently, is recognition in the United States that the smartphone is a domestically appropriate tool for combating entrenched poverty, employer abuses, and the myriad of constraints that have long prevented some of the most vulnerable Americans from taking advantage of opportunities that may significantly improve their lives.

What's more, the increasing adoption of smartphones by people whose economic activity often doesn't register "officially" -- thus relegating them to what is variously known as the "underground," "gray" or "shadow" economy -- is creating data trails that can give researchers a good look at what has previously been obscure. The smartphone can illuminate the shadow economy, both for those inside of it, and those who want to understand it better.

"There are so many great tools on the Internet for comparing options," says Brendan McBride, "whether you are going to a restaurant or seeing a movie. What we are trying to do is bring those kinds of tools to bear on a sector that hasn't traditionally had this kind of tool."

McBride, an affordable housing developer in New York, is talking about Remas, a still-in-beta project that aims to help immigrants find the cheapest, safest way to send money back to their families. Plug in your destination and how much money you want to send, and the app will conduct a price comparison on available money transfer services. On the website Applications for Good, Remas describes the problem it is trying to solve:

One in nine people living in the US was born in another country. In 2009, immigrants in the US sent $38 billion in funds – known as remittances – to their places of origin, mostly through money transfer companies like Western Union, MoneyGram, and dozens more. With variable fees and fluctuating exchange rates, money transfer costs are difficult to decipher and compare, restricting consumers’ abilities to make informed decisions about sending money home. Millions of dollars in savings every year are unrealized—savings that could benefit senders and their families here and abroad.

McBride says his motivation to found Remas was partly generated by his experience working in a community health center coordinating a program that did outreach to migrant farmworkers. It was clear to him that the driving motivation sending these workers to the U.S. was their desire to support people back home, but their "awareness of their options for doing so was severely limited." Remas -- as a website, smartphone app or simple text messaging service -- is designed to solve that problem.

McBride's project got a big boost when he and his team entered a competition sponsored by Applications for Good, a spinoff project created by One Economy, a nonprofit that works to leverage technology solutions to alleviate poverty. With the help of a broadband stimulus grant from the Obama administration, One Economy set up Applications for Good with the express intention of creating mobile applications that change the world for the better.

Applications for Good offers a concentrated repository for smartphone apps designed to help break down the isolation that so often works as a kind of amplifier of poverty. Another project under way with Applications for Good support is SNAP Fresh, a text-based phone app that locates five nearby grocery outlets that accept food stamp debit cards as payment. There's also BEE Local, an app that locates public services targeted at low-income people.

The field of shadow economy smartphone apps is clearly in its infancy, but seems certain to grow, either through efforts by developers who want to change the world for the better or via entrepreneurs who recognize that there is a largely unserved market rapidly getting online through their phones. As this market grows bigger, however, it may end up shoving the shadow economy right out of the shadows into the glaring light of mainstream society. When you are online you are no longer invisible. Every tweet, every query, every text is trackable.

At the Price of Weed website, recent purchasers of marijuana are invited to post how much their latest quarter-ounce cost them. A couple of researchers at the University of Kentucky decided to crunch the numbers to see what they could learn about pot market economics. What they discovered was not too startling -- prices were lowest near prime cultivation regions and in states with lenient medical marijuana laws. But there was a larger lesson. Self-reported geo-coded data about an off-the-books economic activity ending up describing a market that is often obscured in haze.

In a research paper discussing their findings that is currently under peer review, the authors note that "by measuring a facet of the underground economy never before studied with a national-level dataset ... the analysis of user-generated data undoubtedly allows for unprecedented insights into a highly significant component of everyday economic and social life."

The potential for doing similar research into other hitherto obscure regions of economic activity is huge.

Illuminating the market-based underground economies could be highly beneficial by uncovering facets of the economy such as child labor, slavery and human trafficking that are able to persist in part precisely because they are able to remain unmeasurable and uncodified by traditional data collection methods.

Of course, "beneficial" is in the eye of the beholder. The authors also note that "the increasing information shadows to economic activities raise the specter of state and corporate control into previously unregulated practices of informal exchange (e.g. bartering and gifting practices)."

As one of the authors, Matthew Zook, explained, "You can bypass a lot of traditional ways of doing things," by jumping into the digitally mediated realm, "but precisely because it is digital technology it can be traced back. The Department of Defense or industry can use social networking data to better understand terrorism cells or how to better sell you a better electronic gadget."

The smartphone will set us free, and simultaneously suck us deeper into the system.