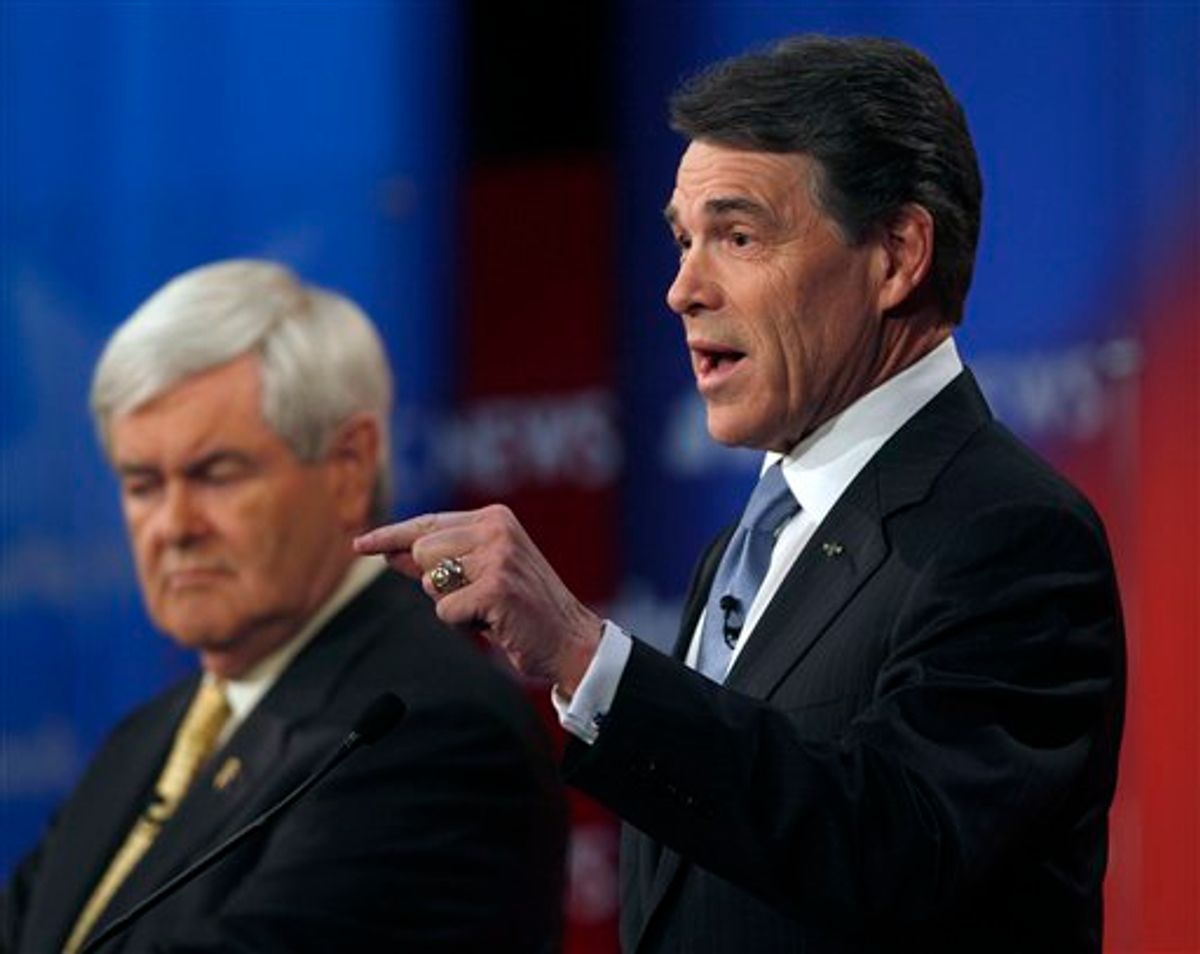 When Rick Perry inexplicably decided to stay in the presidential race after the Iowa caucuses (after all but dropping out in his concession speech), it seemed that he was doing Mitt Romney a huge favor. It was clear, after all, that Perry was no longer a threat to win the nomination, but his lingering presence in South Carolina and on the state's airwaves meant that he'd still win a small share of the vote -- support that Rick Santorum, who seemed to emerge from Iowa as Romney's most viable conservative opponent, would badly need to catch Romney in the state.

It turns out, though, that Perry was actually giving a big assist to Newt Gingrich. The Texas governor, whose campaign began with enormous expectations only to fizzle out thanks to one painful debate performance after another, ended his GOP campaign late this morning, less than 48 hours before polls open in South Carolina, and threw his support behind Gingrich. The move is significant in two ways, neither of which has much to do with the minuscule support Perry was registering in South Carolina polls.

The first is the signal that his endorsement of Gingrich could send to conservatives who are still making up their minds. Gingrich has essentially been fighting two battles in South Carolina -- one to tear down Romney and the other to cement himself as the right's consensus Romney alternative. That second battle has been complicated by the presence of Santorum, whose Palmetto State poll numbers rose after his strong Iowa showing and who has received some significant support from evangelical leaders in the past week. Gingrich has been running ahead of Santorum, who failed to parlay his Iowa finish into an impressive New Hampshire result, but can't have the former Pennsylvania senator gobbling up a big share of the vote on Saturday.

Gingrich needs to marginalize Santorum, in other words -- and he's made some progress this week, first with a debate performance that conservative activists loved, then with a semi-endorsement from Sarah Palin. The latest polls have also been helpful; an NBC/Marist survey out this morning shows Gingrich trailing Romney by 10 points -- but closing the gap to 5 in the portion of the poll that was conducted after Monday's debate. Perry's exit and endorsement, which will attract considerable attention today, will further encourage the sense that Gingrich is the most -- and really only -- viable vehicle for South Carolina Republicans who aren't ready to hand Romney the nomination.

The other benefit of Perry's move for Gingrich is that it will clear space onstage at tonight's final pre-South Carolina debate, which will now feature just four candidates. That means more airtime for Gingrich, whose candidacy has lasted this long thanks in large part to his debate performances. Of course, this will also leave more time for Romney -- whose campaign has renewed its attacks on the former speaker in the past few days -- to go after Gingrich, and (perhaps) for the moderators to ask Gingrich about the statements that his second wife made to ABC News in an interview that's airing today.

For a Perry, there's something undeniably sad about how this campaign is ending. When he jumped in the race, he had the potential to unite the party's activist and professional classes and to leave Romney in the dust. Instead, he's dropping out with single-digit support in South Carolina and using his exit to try to prop up a scandalized former speaker who only became relevant to this campaign because of Perry's own epic shortcomings.