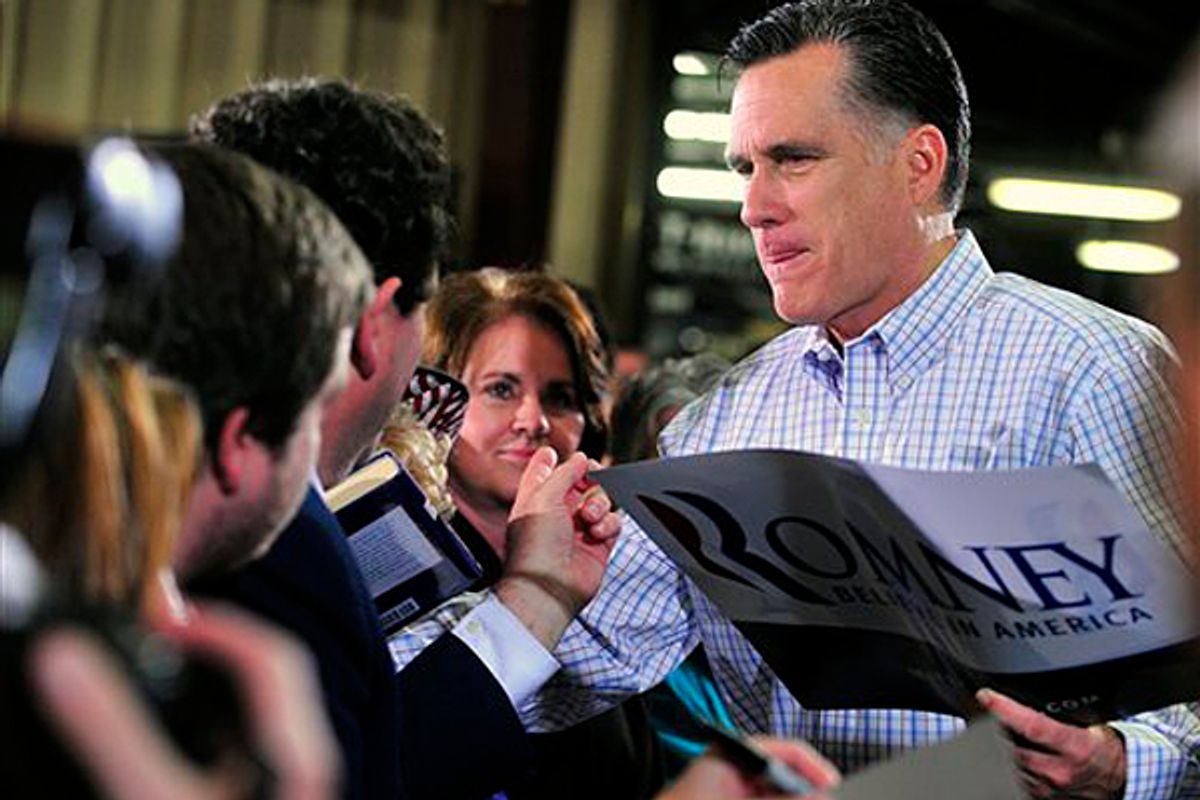 The lion's share of the wealth Mitt Romney accumulated during his years at Bain Capital was extracted not only by laying off workers and raiding their pensions, but by using what conservatives call “big government” to redistribute wealth from taxpayers to Bain's investors and partners.

Bain Capital was not in the business of creating jobs, or even saving companies over the long-term. Its model had a relatively low rate of success; a study by Deutche Bank found that 33 out of 68 major deals cut on Romney's watch lost money for the firm's investors. Its richest deals made up for the flops, however, and Bain's partners were guaranteed hefty fees regardless of how the businesses they “restructured” ultimately performed.

Romney and his partners then exploited a loophole in the tax code that allowed them to pay just 15 percent of their growing fortunes in taxes -- a rate less than what many of their companies' employees forked over to Uncle Sam.

“By and large, [government] gets in the way of creating jobs," Romney said during a GOP debate last year. But, as the Los Angeles Times noted, “during his business career Romney made avid use of public-private partnerships, something that many conservatives consider to be 'corporate welfare.'"

On the campaign trail, Romney often touts a successful investment in an Indiana steel company called Steel Dynamics, but he doesn't mention that the firm had taken advantage of “generous tax breaks and other subsidies provided by the state of Indiana and the residents of DeKalb County, where the company's first mill was built.”

But that's a small part of the public largesse Bain enjoyed. Most of the big money the firm brought in during those years was extracted through “leveraged buy-outs,” a reality that Romney doesn't like to talk about on the campaign trail. Instead, he wants to talk about Staples, which was one of a small handful of Bain's venture capital deals. The 89,000 people employed at the office supply chain go a long way toward the campaign's dubious and unsourced claim that Bain “created 100,000 jobs” under Romney's tutelage. But venture capital represented a small share of Romney's deals, and it's important to understand the distinction between venture capital and leveraged buy-outs.

You won't hear much criticism of venture capital deals like Bain's investment in Staples. It's a very basic free-market transaction -- investors put money into a company at its early stages in exchange for a share of the company. If the start-up doesn't pan out, the investors lose their stake; if it grows and matures, they make healthy profit, usually when the company goes public or is sold off. In venture capital deals, investors only make a profit when the company that receives their cash does well.

Leveraged buy-outs are a different creature entirely. Leveraged buy-out firms became so closely associated with the most rapacious and unsustainable form of capitalism in the 1980s, that the entire industry rebranded itself as “private equity” to escape the stigma.

Leveraged buy-out artists also deal with risky companies -- usually those struggling to stay afloat -- but they don't actually take on much risk themselves as they structure the deals so they profit whether the target company becomes healthy and grows or collapses, often under the weight of debt piled onto it by the private equity firm itself.

Here's how the deal works. The leveraged buy-out firm will put down a fraction of the cost of buying an ailing company. The balance of the transaction is borrowed, but the debt goes onto the books of the target company, not the private equity firm -- the struggling company basically finances the lion's share of its own sale.

And here's the key point: The target company's debt payments increase significantly, and those debt payments are then written off, reducing its tax burden significantly. This subsidy increases short-term revenues -- at the expense of long-term debt -- and that, in turn, is paid out in dividends to Bain's investors and a fat stream of management fees that Romney and his partners skimmed off the top.

(The industry-standard structure of these deals is known as “2 and 20.” Management gets 2 percent of the capital that they invest as a fee, and 20 percent of the profits that the fund realizes. That 2 percent represents between 2-4 times what the average management fees for a mutual fund usually run, and is collected regardless of how the fund does.)

Josh Kosman, author of "The Buyout of America, "How Private Equity Is Destroying Jobs and Killing the American Economy," told Mike Konczai that a typical leveraged buy-out deal decreases a target-company's tax burden by half. A recent study by researchers at the University of Chicago estimated that the average tax benefit of these companies' increased debt-loads in 1980s equalled “10 to 20 percent of ﬁrm value,” which, as Konczai noted, “is value that comes from taxpayers to private equity as a result of the tax code.”

This is important to understand as it lays bare the defenses Romney's spinmeisters have employed to fend off criticism of his past as what Rick Perry called a “vulture capitalist,” and Newt Gingrich described as a business based on "figuring out clever legal ways to loot a company." (Let's pause here to savor the hypocrisy: a Texas teachers pension fund, one of the largest in the state, is an investor in Bain, and all of its trustees are Perry appointees, and Gingrich himself sat on a board of Forstmann Little. A major competitor of Bain Capital.)

First, those criticizing what private equity funds like Bain do are not assaulting the “free enterprise” system. To the contrary, they are calling out a gamed tax system which guaranteed that Romney and his partners would make healthy profits, regardless of whether the companies they acquired went belly-up. Romney claims that he took risks and shouldn't be criticized for reaping the rewards, but the game Bain played was in fact antithetical to the free-market model.

Second, one need not be “envious” of Romney's fortune to be bitter about the means by which it was accrued. Contrary to the line Romney and his flacks have adopted, critics are not begrudging him riches won by hard work and prudent investment. Bain is deserving of our opprobrium for its rent-seeking at the expense of workers at the companies it bought out and through a series of tax subsidies, and Romney's hypocrisy in suggesting that he was simply a free marketeer must be called out.

Romney talks a lot about “creative destruction” -- about how he made the hard decisions that would allow troubled, inefficient firms to grow. But Bain's interest was to its investors, and it flipped companies quickly, reaping huge profits and often leaving them saddled with debt -- often high-interest debt financed with “junk bonds” -- that they struggled to service.

That short-term focus didn't necessarily serve its acquisitions well. Another steel mill, one Romney doesn't discuss on the campaign trail, is South Carolina-based GS Industries. Bain acquired the company for $24.5 million in 1993, and by the end of the decade Bain estimated that its partners had made $58.4 million on the deal, including “multimillion-dollar dividends” and “annual management fees of about $900,000,” according to the Boston Herald. Bain left the company saddled with over a half-billion in debt, and it filed for bankruptcy in 2001.

"We were doing well and then Bain Capital bought us and they took everything they could out of the company without making the investments we needed to stay competitive," James Sanderson, who had worked at the mill since 1974 told the Herald. "They ran the company into bankruptcy."

Along the way, 1,750 workers lost their jobs. According to the Herald, “less than a year after taking a controlling interest in the Georgetown plant, Bain Capital cut the employees’ profit-sharing plan twice -- lowering the plan’s hourly rate from $5.60 an hour to $1.25 per hour.” The profit-sharing plan was soon phased out altogether.

Layoffs and benefit cuts led workers at the company's Kansas City, Missouri plant to strike for the first time in four decades. A state legislator accused Bain of union-busting during the 10-week dispute. Sanderson told McClatchy in 2000 that Bain "forced a labor dispute at every location."

This is the model of “free-enterprise” that Mitt Romney brags about, and on which he built an estimated $200 million fortune. It's the model on which he continues to make millions of dollars today. According to the New York Times, “the final deal of his private equity career” was a “retirement agreement with his former partners that has paid him a share of Bain’s profits ever since.”

It's vulture capitalism -- one of the many ways in which our bloated financial sector extracts wealth from the productive economy. And we can thank a couple of craven Republican candidates for the fact that we're talking about it.