The joy of judgmental Christian sex 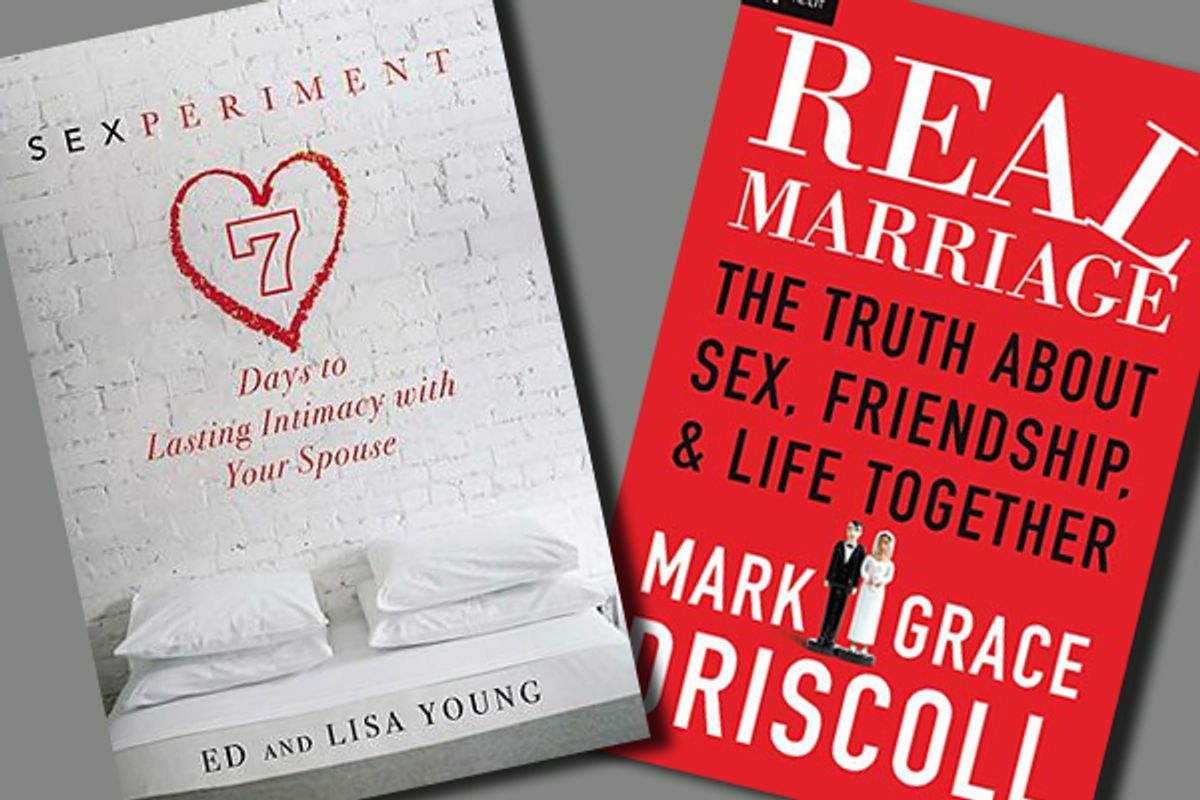 Pastor Ed Young and his wife, Lisa, climbed to the rooftop of their Texas church last week and staged a 24-hour bed-in. Their aim was to encourage other married couples to undertake seven straight days of sex, all in the name of the Lord -- and to promote their new book.

There was no nudity, and certainly no nookie, during the webcast stunt, but it nonetheless got the pair on CNN and earned invaluable advertising for "Sexperiment: 7 Days to Lasting Intimacy With Your Spouse." It's the second Christian "sex advice" book to be lavished with attention this month for allegedly being edgy and oh so sexy. "Real Marriage: The Truth About Sex, Friendship, and Life Together," written by pastor Mark Driscoll of Seattle's Mars Hill Church and wife Grace Driscoll, similarly sings the praises of sex as a form of communion with God.

But having actually read these books, I can tell you they are not the wild sex manuals the media frenzy suggests -- in fact, they are treatises against homosexuality, pornography and premarital sex. None of this is exactly surprising, but amid the sexy buzz surrounding these books, it's important to underscore just how sexually stunted they are.

Now, I may not be the most impartial judge -- I'm an arrogant, unrepentant atheist and fornicator, after all -- but throw my sex reporting credentials in the mix and I am specially poised to sniff out the most anachronistic and bigoted sexual beliefs espoused in these books.

Where to start, where to even start? How about here: "Good sex, the best sex, is biblical sex -- one man and one woman within the context of marriage," write the Youngs in "Sexperiment." Later, they explain that "the act of sexual intercourse -- in God's economy -- is reserved exclusively for husbands and wives." Any other kind of sex is sin. Similarly, "Real Marriage" preaches against the worship of creation, or sex, as a god, which it claims leads to worship of "the human body and its pleasures through sinful sex, including homosexuality and lesbianism."

Premarital sex is another big target, of course. In a bizarre mixed metaphor, the Youngs explain:

We're not to make big sex (in the context of marriage) into little sex (premarital or extramarital affairs). There are two options when it comes to having sex. ... Think of it as the big bed or the little bed. In our house, the little beds are reserved for the dogs. People don't sleep there. But that's what sex outside of marriage is doing is taking sex out of the big bed of marriage and putting it into the little dog bed and saying, "I can't help it. I know what God wants for me to do with sex. I know he's reserved it for marriage. But I'm just an animal. I can't help but do it whenever, wherever, and with whomever. I'm a deer in rut, a hound in heat."

They don't leave it at that, though: "God doesn't want us to experience little sex in the dog bed; he wants us to experience the power and purpose of big sex in the right bed." Got that? All I'm left with is an image of two adults getting it on in a dog bed with a dejected little pup looking on.

Weird metaphors abound in "Sexperiment," mostly because the Youngs -- unlike the Driscolls -- are only comfortable talking about sex in the abstract. For example: "Sex is like a Ferrari. If someone gives you a Ferrari, you don't trash it. … You wash it and wax it. … You drive it on the freeway." Just as with the Bible itself, the vague allegorical language leaves plenty of room for personal interpretation and co-optation. Let's just assume that "wash it and wax it" is a tacit endorsement of porn star pubic stylings and "you drive it on the freeway" means that sex in cars is awesome.

On top of the weird metaphors, there's weird science. The Driscolls, perhaps unintentionally, invoke an image of God in a white lab coat, the biochemist behind your orgasm. "The natural chemical 'high,' what some call a 'biochemical love potion,' resulting from sex and orgasm was designed by God to bind a husband and wife together." And, once again, the Youngs bring up the dog-bed allegory:

If we get out of the big bed, and get into the little bed of sexual sin, the repercussions are so far-reaching that it's difficult to understand them at all. It doesn't take a neuroscientist to see that our world is facing all kinds of diseases, brokenness, and confusion. And a huge chunk of that is due to sexual sin – using sex outside of God's design for it.

Worst of all in the science department is the Driscolls' handling of birth control. Behold this medically inaccurate passage: "Generally speaking, hormonal birth control methods run the risk of causing an abortion." (Accurately speaking, hormonal birth control prevents ovulation and fertilization, not implantation. But, contrary to the American College of Obstetricians and Gynecologists' accepted definition, some folks think a pregnancy begins at fertilization.) They go on to explain, "As Christian leaders who are admittedly not medically trained, we do not encourage members of our church to use the pill." Sure doesn't hurt the congregation count.

Enemy No. 1 of both of these books is pornography. "Sexperiment" spills pages of ink on the subject, but the message throughout is consistent and unwavering: "A husband and wife who see sex and marriage as God sees it also see the math of marriage as 1+1=1. There is no room there for a third party. Pornography is a third party." "Real Marriage" is similarly one-note: "The purpose of pornography is clearly lust. And throughout both the Old and New Testaments, God repeatedly condemns – as a grievous evil – lust for anyone but your spouse." But the Driscolls go so far as to compare hardcore pornography to the "Twilight" series:

In the lust category, along with sexual nudity and pornography, we also include women's romance novels. They commonly entice sinful lust and cause women to fantasize about sexual sin with all the alluring power of visual pornography for men. This kind of sinful lustful fantasizing extends to such things as the Twilight phenomenon, where older women, many of them mothers, openly fantasize about sexual desires they had for the young actors in the film.

I don't mean to suggest that there aren't edgy – relatively speaking – passages in these books. Most notably, "Real Marriage" performs an exegesis of Song of Songs, the sexiest book in the Bible, suggesting that the text celebrates striptease and oral sex. But this is no secret – scholars have long interpreted Song of Songs this way. To the Driscolls' credit, they encourage couples:

It's wonderful to see influential religious leaders celebrating sex as a healthy, pleasurable act and encouraging their flock to get it on in the name of God. But these authors don't deserve any praise for sticking to the same hoary rhetoric about good sex and bad sex. Show me a Christian advice book that celebrates all types of consensual, adult sex as communion with God, and then we can talk.