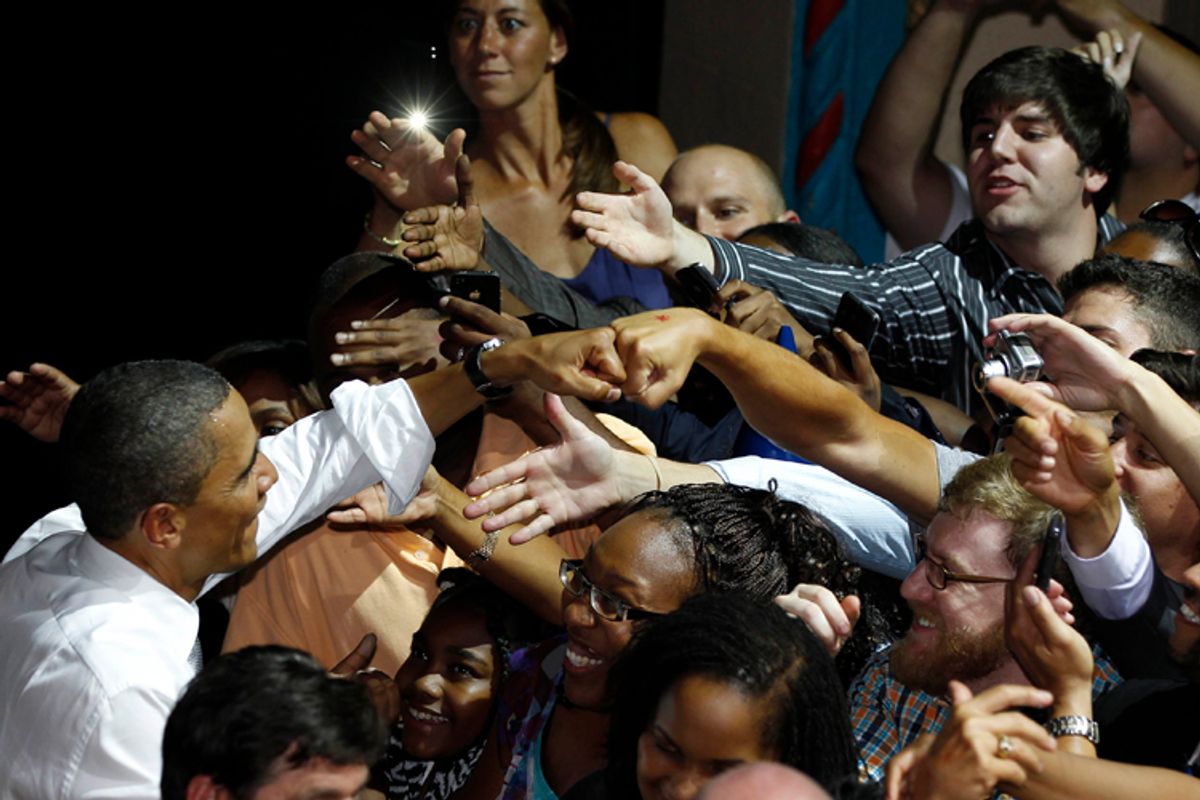 This year, Barack Obama may become America’s first billion-dollar candidate. Funds he raises for either his own reelection campaign or for the Democratic National Committee, or that “unaffiliated” friends raise for his super PAC, could eclipse the mythical, 10-figure threshold. Can he do it and, more to the point, will he even need all that much cash?

Obama enjoys the three advantages any incumbent president seeking reelection does: four full years to raise money for his own campaign or the national party committees; the political leverage of the office he holds to raise it; and, like incumbents in most cycles, the absence of a primary challenger who might draw down his coffers. Sure enough, and despite a crowded Republican field, by the midpoint of 2011 Obama had already raised more money ($48.7 million) than all of the GOP presidential hopefuls combined ($36.7 million). His campaign has since raised $42 million in both the third and fourth quarters of 2011, with the Democratic National Committee hauling in an additional $51 million during the final six months of last year.

And yet, the big numbers the president has thus far posted on the fundraising scoreboard have raised some brows of worry. After all, his 2011 totals are dwarfed by the monthly sums Obama raised during 2008. During his January 2008 primary breakout month he raised $32 million, and his post-convention August 2008 haul was more than $66 million.

As Politico’s Glenn Thrush reported last week, the economic situation, coupled with the belief among donors that Obama will be flush with cash, has made fundraising tougher this cycle than expected. “The fourth-quarter take brought the Obama-DNC total 2011 haul to $250 million — impressive on its face,” writes Thrush. “But operatives in Obama’s orbit concede that number could be higher and blame the problem, in part, on GOP talking heads who repeatedly assert that the president ultimately will collect a billion dollars.”

If not a billion, will Obama at least exceed his $745 million haul from the 2008 cycle? “So far, by the end of 2011 Obama raised about the same amount as he did by the end of 2007, although this time he’s also raised money for the party. The big question is whether he can kick it up to a higher level this year as he did in 2008,” says Michael Malbin, executive director of the Campaign Finance Institute. “I think it’s perfectly obvious that Obama will have plenty of money whether he sets the record or not. Last time the money flowed to him after it became clear he was the alternative to the front-runner, whereas this time everyone knows he’ll be the nominee.”

So fret not for the president. Although the financial sector is more strapped for cash than four years ago and the economic recovery nationally has been slow, Malbin believes the economic environment will not provide a significant fundraising drag on either party or its respective nominees.

Malbin believes the far bigger campaign finance question is whether Romney or whoever the Republicans nominate can keep up once the race simplifies into a two-person contest. Although he suspects the GOP nominee will be unable to match Obama’s campaign war chest, he thinks the GOP nominee will have “a fairly easy time” raising a competitive sum and thus will not be crippled financially the way John McCain was in 2008.

Meanwhile, the $1 billion goal creates something of a dilemma for Obama’s reelection campaign. On one hand, Republicans have raised expectations that Obama will reach the historic threshold, so failing to do so might be criticized; on the other hand, should Obama and the DNC raise that much, Republicans can warn forebodingly that the president is trying to buy reelection. Mitt Romney may believe income inequality should only be spoken about in "quiet rooms," but you can bet if he’s the nominee his campaign will be shouting from the rooftops about the Obillionaire candidacy. Obama and the Democrats may be wise to keep their net total in the high nine figures, leaving the task of breaking the billion-dollar ceiling for a future presidential aspirant.

That said, does Obama even need to raise a billion in 2012? Given how much he had to raise and spend to fend off a Hillary Clinton primary challenge he doesn’t face this cycle, probably not.

Obama spent $92 million in 2007, plus another $100 million during the first quarter of 2008 when the primary battle with Clinton was still fully underway. So even if every dollar spent after April 1, 2008, is counted as a general election expense — a conservative estimate, given that Clinton didn’t drop out until after the North Carolina and Indiana primaries in early May — that means at least $192 million of the $730 million the Obama campaign spent was used to win the primary, leaving a little more than a half-billion for the general election contest. (The campaign spent all but $15 million of the $745 million raised.) If in 2011-12 Obama raises and spends $1 billion he will effectively have twice the amount to fend off the GOP’s nominee this cycle as he did four years ago to defeat McCain.

The more important target for Obama campaign finance director Rufus Gifford — who in 2008 raked in more than $80 million as chairman of Obama’s Southern California finance team — may be total donors. (Gifford and the Obama 2012 finance team did not respond to requests for comment.) In 2007-08, the Obama campaign received more than 6.5 million online donations from more than 3 million unique donors. This past October the campaign announced that it had already reached 1 million unique donors, and Team Obama is particularly proud of the fact that the average donation is less than $60 and that 98 percent of all donations are in amounts of $250 or less. Bodies often matter as much as dollars, says Malbin, because donor totals are an imperfect yet useful proxy for how many volunteers and activists a campaign can mobilize in the field in swing states.

But what about the independent expenditures of traditional PACs and the dreaded, Citizens United-era super PACs and their hidden donors? Won’t they mitigate Obama’s fundraising advantages? Perhaps, but not likely.

Campaign finance expert Sheila Krumholz of the Center for Responsive Politics thinks the major impact of super PACs may have already come and gone during the Republican primary, by “breathing life into campaigns that didn’t have a big war chest to depend on,” like those of Newt Gingrich and Rick Santorum. Restore Our Future, the Super PAC supporting Romney, also ran devastatingly effective negative ads against Gingrich in Iowa, which, combined with Ron Paul’s television assault on the former speaker, deflated Gingrich’s post-Thanksgiving bubble. Krumholz predicts that super PACs “will become less important than their more secretive nonprofit counterparts once we identify the Republican nominee and move through conventions and into the fall.”

Although the Karl Rove-led Super PAC American Crossroads and its affiliate Crossroads GPS 501(c)4 hope to raise and spend approximately $240 million, the bigger threat to Obama during the upcoming general election for Obama may be the independent expenditures of traditional PACs. But Obama supporters, including the unions, should be able to raise counterbalancing sums for independent expenditures — and, of course, Obama may have a cool billion in candidate and party monies to spend, should he even need it.

The scary talk about big-money electoral politics emanating from TV pundits and citizen groups is not unwarranted. Citizens United, a very unpopular ruling, is clearly bad for the republic. And liberals and Democrats have ample reason to worry about the prospect of Karl Rove dispensing a quarter-billion dollars in a single election cycle. But Howard Dean’s 2004 breaking-the-campaign-finance-glass-ceiling candidacy, coupled with Obama’s breaking-the-bank 2008 presidential run in which roughly one in every 20 Americans who voted for him also donated to his campaign, offer reassuring evidence of the democratization of national, or at least presidential, campaign finance. (PAC and party monies remain highly influential in congressional races.)

Whatever Democratic theorists or talking heads may say about the state of American campaign finance, this much is indisputable: Should the African-American community organizer with the humble beginnings lose reelection this November, it won’t be because he was outraised and outspent.