The past Newt can't outrun 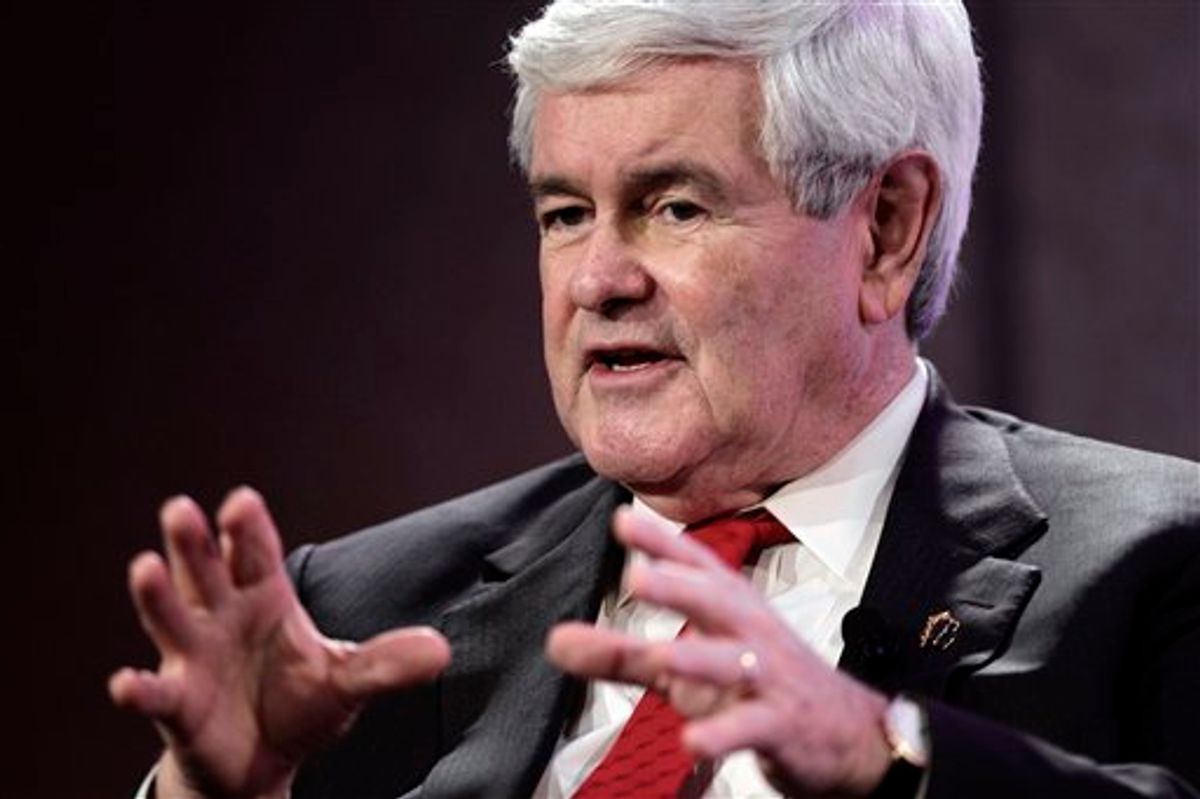 The epitaph on Newt Gingrich's presidential campaign tombstone may end up reading, "No matter how hard he tried, he couldn't outrun his past."

Think back to early December, when months of well-received debate performances (coupled with Herman Cain's demise) finally turned into real polling traction for the former House speaker. He surged to lopsided leads in national and key early state polls, and with Iowa less than a month away his timing seemed almost perfect. Gingrich grew so cocky that he declared, "It’s very hard not to look at the recent polls and think that the odds are very high I’m going to be the nominee."

But the sudden, previously unimaginable possibility that Gingrich might win the Republican nomination spooked a very specific group of elite Republicans: those who remembered what an epic political disaster his four-year run as speaker was for the party. Together they used their influential perches to undermine his standing with the many Republican voters who don't really remember the 1990s and who'd come to know Gingrich through his Fox-enabled rehabilitation as an "ideas man" and GOP elder statesman. Any tool they could find to puncture the Gingrich bubble they used, and their efforts (combined with those of a free-spending pro-Mitt Romney super PAC) quickly paid off.

Still, Gingrich managed to finish respectably enough in Iowa and New Hampshire that he now finds himself with the best shot of knocking off Romney in South Carolina -- an outcome that would prevent Romney from wrapping up the nomination on the spot, extend the GOP race at least through Florida, and give Gingrich one final chance at making a real run at the nomination. He remains an underdog in South Carolina, but the strong response to his resentment-intense Monday debate performance from conservative leaders and a semi-endorsement from Sarah Palin have made a late Gingrich surge to victory at least plausible.

And so, almost on cue, here come the ghosts from Newt's past once again.

First up was a Romney campaign conference call on Thursday afternoon featuring two former House members who served during Gingrich's speakership. Missouri's Jim Talent and New York's Susan Molinari both testified to his erratic leadership style, his penchant for inflammatory, divisive and self-contradictory public pronouncements, and the profound electoral damage he did to the GOP while in office.

"Each one of us has personal stories we can tell about going home and having to clean up after our speaker," Talent said. "It had an impact on the 1996 presidential election, and if he’s the nominee it’ll have an impact on the 2012 election -- and the impact’s not going to be good for the conservative movement and the Republican Party."

The Romney campaign is following that up this morning with another conference call, this one featuring John Sununu, who served as Bush 41's White House chief of staff. Sununu was on the job in the fall of 1990 when Gingrich, after initially signaling to Bush and other GOP leaders that he'd go along with the anti-deficit tax package they'd agreed to with Democrats, launched a surprise rebellion that divided the House GOP ranks, sank the deal, fomented grass-roots conservative rage with the president, and cemented Gingrich's status as the activist right's top national leader. Sununu is known as a man who enjoys payback; in a way, his conference call has been 22 years in the making.

But the most ominous development for Newt came last night, with word that ABC News had obtained an on-camera interview with his second wife, Marianne, the woman he left in the late '90s for his current, much younger wife, Callista. The interview will apparently air on "Nightline" late Thursday night, after the final pre-South Carolina GOP debate, with excerpts expected to leak out during the day.

Marianne Gingrich did speak publicly once before during this campaign, providing several juicy quotes and anecdotes to Esquire over the summer. For instance, she said that her ex-husband "believes that what he says in public and how he lives don't have to be connected" and provided this account of how he broke the news to her of his relationship with Callista:

She called a minister they both trusted. He came over to the house the next day and worked with them the whole weekend, but Gingrich just kept saying she was a Jaguar and all he wanted was a Chevrolet. " 'I can't handle a Jaguar right now.' He said that many times. 'All I want is a Chevrolet.' "

He asked her to just tolerate the affair, an offer she refused.

He'd just returned from Erie, Pennsylvania, where he'd given a speech full of high sentiments about compassion and family values.

The next night, they sat talking out on their back patio in Georgia. She said, "How do you give that speech and do what you're doing?"

That interview generated its share of attention when it ran, but at the time Gingrich barely seemed relevant to the GOP race. So even if, as the Gingrich campaign apparently believes is the case, Marianne Gingrich didn't say anything new to ABC, the sight and sound of her recalling Newt's wild mood swings and cruel treatment of her in the '90s could be the kind of sensational development that nullifies whatever progress he's made this week. And even if he does somehow pull out a win Saturday, the ghosts won't just go away. It's the story of his campaign: Whenever something goes right, the people who know him best are there to spoil the fun.